And the winner of the wagyu war is… | Inquirer Lifestyle 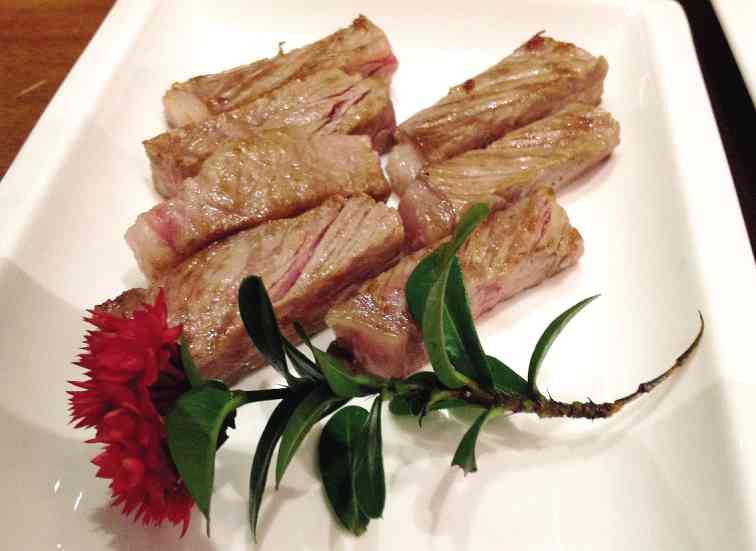 And the winner of the wagyu war is…

The quest continues for interesting and satisfying food in Manila, even if the weather dictates that the voyage goes on by some sort of submersible craft, instead of conventional four-wheeled transportation.

These are the kind of days when the city ceases to function, and after crawling home through snarling traffic, you just want to lie supine on a very fluffy mattress and have food spooned sideways into your mouth.

But despite hell and high water, we venture out because friends want to meet up for a drink, someone’s having a birthday, or in the hope that the cosseting embrace of a good restaurant can make up for a bad day at work.

One would think that the rarified atmosphere at Inagiku would provide a cushioned alternative universe, where all was right in the world. Given a view of the teppan grill and the magnolia trees outside the tinted glass windows, it did seem promising for a moment.

I’ve had wonderful meals at Inagiku, upon the invitation of the PR department, when the chef would appear with a great sword and a deep bow, and shower us with toro sashimi, among much else, and plump, dazzling seafood set on ice.

Dining as private citizens, however, we had a server who was attentive enough but who attempted to sell us insurance, and a kaiseki set of such withering, shriveled proportions that even the server asked us (either sardonically or with actual concern, we weren’t sure which) if we were full and might need extra rice.

He also seemed genuinely taken aback by the idea that we would pay for our meal, and kept asking us if we had dining cards, discount cards, or would charge it to a company account. The reason for the concern soon presented itself in a high, four-digit bill.

On our way out we saw congressmen, expense-account executives and hotel guests: essentially, no one who was local and willing to pay one’s own money for a mediocre meal. But the magnolia trees were nice.

It seemed foolhardy to try and cancel out a bad, expensive meal with another pricey meal of unknown quality, but the countdown to Magosaburo’s opening had quietly passed and the local branch of the Japanese franchise appeared to be open for business.

I was surprised at how easily I was able to get a reservation, as well as how empty the dining room was—save for one table in the corner that was having lobsters garlanded with flowers presented to them.

Still smarting from Inagiku, we desisted from the kaiseki set and went for what the restaurant is best known for: Japanese wagyu cooked on a stone grill.

The stone grills are mounted on little podiums, which they wheel up to the table. They take their place behind it like a priest about to embark on a long, admonishing homily.

With great solemnity, they check the temperature of the stone with an infrared thermometer, sear the precious slabs of marbled beef, and hand over the meat and wheel the podium away.

The meal disappeared far too quickly, and we were left staring enviously at the tables in the corner that were still going, now with intriguing wooden bowls being delivered to them.

Make no mistake, this is the real thing, in terms of quality of meat and expertise of service. It isn’t stuff-yourself-silly bargain eating; nor is it overpriced to the point that it leaves you hungry and not have the decency to at least fill you with crap, like other similar establishments.

You get what you pay for, and the restaurant is the minimalist, obsidian temple where you, your date, your bank account and the various slabs of meat interact with each other in a delicate dance, easy to trip up.

I will say that Japanese wagyu sirloin, straight off the stone grill, with just a squeeze of lemon and a rub of sea salt, is one of the most wonderful things I’ve put in my mouth, and which I’ve been chasing since the slew of Japanese and Korean grilled beef franchises began to pop up.

And now that I’ve had it, I’ll be back, but only next year or so; just as I try to limit my splurges on o-toro and Peking duck to, at most, once a year.

And this is where I suggest the fat cats who inhabit Inagiku should come to lick their cream; you can splash out just as much, on both food and wine in the Chesterfield-filled lounge upstairs, and get so much more for your money.

For those of us who aren’t fat cats, we can do an occasional splurge, or, more realistically, go for the less expensive local wagyu cuts on offer. Unless you’re out to impress or hoping to score, there’s no reason to be cowed into choosing the most expensive item on the menu.

It’s a pleasant enough dining experience, though vertiginously more upscale than its location would suggest, and far too expensive for a casual drop-in, at least for people like me, who buy their toilet paper six rolls at a time.

But beware. For the same money you can have a truly terrible experience a few streets away at Gyu-Kaku, which is just as expensive but surprisingly popular, where stingy little scraps of meat are thrown at you to cook for yourself at a faltering grill at the center of the table, and the service is worse than indifferent.

In the battle for boutique little slabs of meat cooked at or beside table, Magosaburo is currently in the lead, if only because of the direness of the competition.