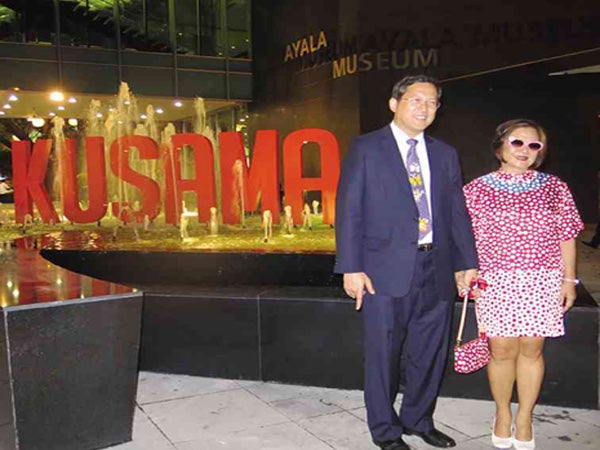 The polka dots, pumpkins and protrusions that characterize the work of Japanese avant-garde artist Yayoi Kusama are now on the walls, halls and galleries of the Ayala Museum, Makati, and it’s about time, dahlings!

Occasion was the opening of the exhibit, “I Love Kusama,” which exhibited works of the Japanese artist from the personal collection of Kim and Lito Camacho.

“Today is a milestone in our lifetime of collecting art,” said my palangga Kim Acuña Camacho, who was fabulously wearing Kusama-print Louis Vuitton pieces from head to toe.

She and husband Lito Camacho, former Finance secretary and now a Credit Suisse managing director based in Singapore, are avid art collectors.

The exhibit is a milestone in its own right as Filipinos are now able to see the incredibly talented Yayoi Kusama’s artworks in the Philippines. Before, viewing pieces by this contemporary art giant could be possible only if one had tickets to international art affairs such as Hong Kong Art Basel and Venice Biennale.

This one-of-a-kind exhibit is running until Sept. 1 at the Ayala Museum.

Kim and Lito have been buying Kusama’s works for their très exclusive collection since 2005. They are, in fact, among the top collectors of Kusama in the world. Kusama’s art is powerful, whimsical, young and hypnotic, palanggas.

“It has often been said that the best works are in private hands, and so, in a sense, they wield influence and shape the taste of the day,” said Ayala Museum director Mariles Gustilo. “Through the Collectors Series (the program in which this exhibition is under), selected works not usually seen in public are presented in curated and thematic exhibitions, to expand the understanding and appreciation of local and international art.”

Minister Setsuo Ohmori of the Embassy of Japan said the exhibit is held as part of the 6th Philippine-Japan Friendship Month. He also announced that world-renowned art critic Akira Tatehata will be in the Philippines as part of the celebration to give a lecture on Kusama on Aug. 10, 4 p.m.

Two Kusama films will also be screened, “Kusama Self Obliteration” and “I Adore Myself: Near Equal Kusama Yayoi,” on Aug. 22.

Proudly Filipino label Bench had been housed in Pasay for ages. Since the brand has become international in the past years, it is only proper for the Bench group, led by iconic retail king Ben Chan, no less, to move its headquarters to Bonifacio Global City in Taguig, natch!

Its new office is the ultra-modern, 23-story Bench Tower. Designed by architect Albert Yu of Asya Group, it is on the corner of 30th Street and Rizal Drive in BGC, dahlings.

The photo exhibit is by top lensman Ronnie Salvacion. Long associated with the Bench famille, he has photographed many campaigns for the brand.

“Bench is celebrating 25 years and with the construction of this building, this Filipino brand, which became a global brand, reaches another milestone,” said Ronnie. “I have been part of this family for 17 years. In that span of time, I have been able to spread my creative horizon, growing alongside a team of talented and dedicated individuals.”

Added the photographer: “This exhibit is not to flaunt the work I did for Bench. As a photographer, we’ve made numerous ads that captured Filipino pop culture through the years. I want to take you to a journey, from my own perspective as a photographer, how it became one of the most recognizable Filipino brands.”

My favorite photo was, naturellement, that of sultry Pops Fernandez’s lipstick campaign, with her name scrawled in rouge over her smooth-as-satin chest. Fantastic visuals. Another favorite was, of course, that of Ben Chan himself.

“These photos meant something then,” Ronnie said. “Looking at them now brings an all-new meaning to Bench.”

The photographs are actually culled from a book Ronnie compiled and gifted Ben Chan last Christmas.

The exhibit was held at the Bench Tower basement called the Playground, designed by architect and interior designer Miguel Pastor (who also designed the interiors of the ground floor and Suyen floors (19th, 20th, 21st, 22nd, 23rd and penthouse).

“For me, it describes the whole idea,” Ronnie said. “I want people to have fun moving around the sections, the way I had fun in my 17 years with Bench.”

Hey, palanggas, grab a copy of Ronnie Salvacion’s book, “25 Things I Learned from My Bench Shoots,” at P320 in select Bench stores nationwide.