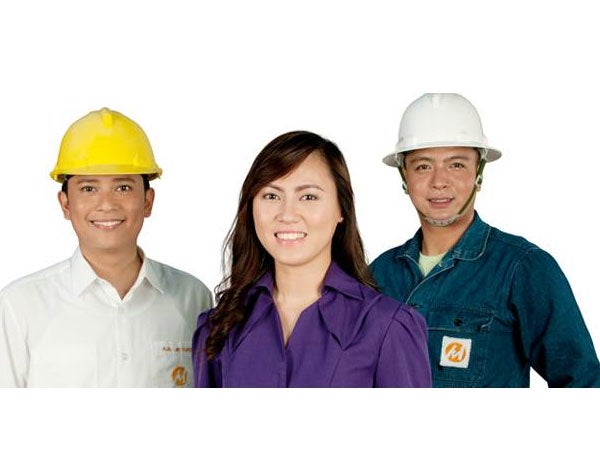 MANILA, Philippines – In Manila Electric Company’s 110-year history, the utility pole has been an exclusive space for men. The physically taxing 50-ft pole climb and a tango with high voltage wires were tasks reserved for male workers – but not for long as the company hatched the idea of taking women trainees in.

“It’s a paradigm shift. We would like to challenge the gender assumptions of the power utility industry,” told Ramon Segismundo, Meralco Senior Vice President and Head of Human Resources. “Because our work culture at Meralco is one of excellence and innovation and that is certainly not gender sensitive. Our female colleagues have a lot do with our success as much as their male counterparts.”

“When we introduced talent management in 2010, one of the key strategies is the broadening of our talent pool for key roles.  Given this move, the initiative to have linewomen is a no-brainer,” he added.

Meralco is one of, if not the first power distributor in Southeast Asia to initiate a comprehensive technical instruction program for linewomen, which began this June. In Bangalore, India, linewomen began doing fieldwork in 2007 while in the Fujian province of China, linewomen got their big break in 2011.

“Part of our rigorous training program is physical and endurance conditioning that is somewhat similar to a military training program,” Ricardo Buencamino, Meralco Networks Head, said. The Networks group is one of the most visible representatives of the company, with its personnel being deployed in all parts of the franchise area, 24 /7, under the most extreme environments.

Buencamino added, “Arm and body strength is needed when they pull the wire and rope in, especially when they are using manually-operated tools. They should be able to handle long working hours under the hot sun, heavy rain or flood. The job also often requires time away from family. Sometimes, they are deployed in far-flung areas to help repair damaged facilities, or even in areas outside the franchise.”

“Ultimately, we’d like for our linewomen to have the same training as our linemen but this is also a learning curve for all of us. What we’d like to do now is to test their full capabilities and limits,” Buencamino said. “I personally met the first batch of linewomen trainees and I could see in their faces sheer determination. That’s very important.”

These qualifications may seem prohibitive, but not for the 12 women who are part of this year’s batch. The elected batch leader in fact, is a strong, 21 year old Cavitena who finished Electrical Engineering Technology in RTU.

Argie Dulos was elected president of the batch for a good reason. She used to be an ROTC officer during college, which meant that in the subject of trainability, discipline, hard work, her foundations are rock solid.

Several years ago, Meralco accepted lady technicians for the first time, and learned a lot about the capacity of women to adjust and excel.

“Our lady technicians have been noted for their patience, innovativeness and superior workmanship – and we expect the same from our linewomen,” added Buencamino. “They would be a sight to behold when they later on perform their functions. A linewoman knocking on the doors of our customers and responding to their trouble calls with utmost courtesy and efficiency will definitely project a warmer yet softer image of an electric utility company.”

Argie said she was at first very hesitant to pursue training but later on took the challenge. This meant waking up at 2 in the morning, leaving at around 3:30 from her Cavite home to be on time for the morning jog and Karate classes. Every weekday from 6 a.m. to 4 p.m. they push themselves physically and mentally for one of the world’s toughest jobs.

“At first we were just ten women in the group, then two other trainees came in much later. We all want to make it as linewomen so we stick together and encourage each other as we go along,” told Argie.

It’s a ground-breaking training program and both Human Resources and Networks recognize that there will be plenty of challenges and perhaps, even some critics, along the way.

But the benefits and the significant impact of such a landmark program certainly outweighs the risks and the stumbling blocks. “A world class high performing organization is meritocratic, inclusive and gender equitable.  Meralco has embarked on this journey as it drives for sustainable organizational success,” Segismundo said. (advt)