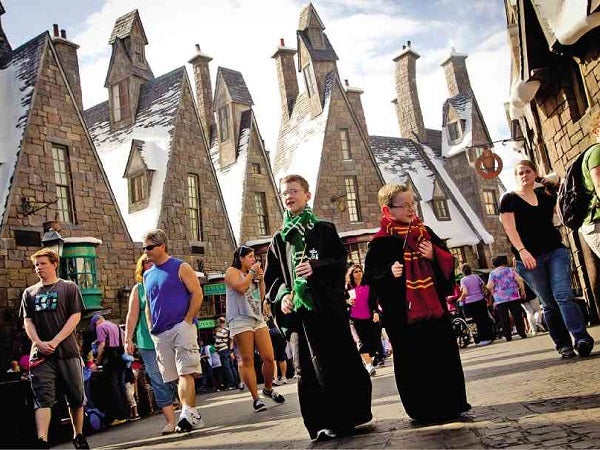 THE WIZARDING World of Harry Potter at Universal Orlando Resort

The US Travel Association and Brand USA are working feverishly to achieve President Barack Obama’s goal of welcoming 100 million foreign tourists to the States by 2021.

Several tourist hotspots, including the West Coast, Las Vegas, and Florida—three of the most visited destinations by Filipinos traveling to the United States—are beefing up their attractions to help achieve this ambitious goal.

Roger Dow, president and CEO of US Travel Association, announced this recently in Las Vegas during the 45th annual IPW (formerly known as International Powwow), a gathering of buyers and sellers, including tourism boards and travel-related industries in the United States.

“US Travel helps the industry to speak with one voice to facilitate increased travel, and Brand USA helps visitors make that choice to come here,” said Dow in an earlier interview with IPW Daily.

“Our efforts go hand in hand, and we work closely with our premier partner Brand USA, both in the event and year-round,” he added. “IPW is our chance to bring the world to America, and we’re thrilled to have that opportunity.”

Unlike in the Philippines, tourism-related concerns in the United States fall under the Department of Commerce. In turn, the department is on top of two private entities tasked to promote and facilitate travel to America.

While US Travel, in close coordination with the US state department, primarily works to reduce barriers to travel to the United States, the newly formed Brand USA is responsible for inviting the rest of the world to discover and rediscover America’s diverse attractions.

For decades, US Travel had to multitask by doing both functions, but there was a need to form a separate entity like Brand USA when President Obama announced last year the country’s National Travel and Tourism Strategy of bringing in 100 million international visitors by 2021.

This year’s IPW, said US Travel Association’s media manager Cathy Keefe, is estimated to generate $3.5 billion in travel revenues to the United States in the next three years, and at least $350 million in future economic impact for Las Vegas, this year’s host city. Chicago, which last hosted in 1998, will host next year’s IPW.

And participation has kept growing, Keefe added. Between 2010 and 2013, the number of total delegates to IPW grew by 25 percent, booth sales increased by 23 percent, and participation by international and domestic buyers jumped 30 percent.

The Las Vegas gathering was able to attract 6,400 delegates from the United States and 70 other countries.

Filipinos won’t benefit any time soon from the state department’s expanded Visa Waiver Program, which now includes 17 countries, including recent additions such as South Korea and Taiwan. But those with the means to tour the United States may find these ongoing developments welcome news.

In the last five years, he said, tourism-related businesses in Las Vegas have poured in $23.6 billion worth of investments. The amount translates into nearly 10,000 new hotel rooms, making Las Vegas the leading American tourist destination in terms of number of hotel rooms, with 151,000.

The city also opened McCarran International Airport’s state-of-the-art Terminal 3 in time for last May’s IPW. Built at a cost of $2.4 billion, the new addition is designed to welcome more leisure travelers in style, as the city continues to diversify its offerings.

New attractions will open along the Las Vegas Strip. The destination will invest more than $5 billion, with projects like Caesars Entertainment’s LINQ and Gasevoort Las Vegas.

“MGM Resorts International has announced plans for a 20,000-seat arena as well as more than $300 million worth of renovations for several of its properties,” said Ralenkotter. “A multibillion dollar, 87-acre, Asian-theme project, Resorts World Las Vegas, is slated to open in 2016.”

The attraction will include a replica of the Great Wall of China and a panda exhibit. The Sahara will undergo rebranding and will open next year as SLS Las Vegas.

Filipinos traveling to Los Angeles and Orlando won’t have to wait long to experience the new attractions Universal Studios has added to its two theme parks on both coasts.

Harry Potter fans are in for more surprises, as Universal Studios Hollywood will have the groundbreaking for “Wizarding World of Harry Potter,” an attraction once exclusive to Universal Orlando Resort. An opening date has yet to be announced, but officials promised a “magical” experience that’s faithful to the film’s landscape.

Universal Orlando will expand its Harry Potter attraction with the addition of Diagon Alley, an extension of the Harry Potter experience. It will include shops, a restaurant, and a marquee attraction based on fictional Gringotts Bank.

Given Universal Hollywood’s well-received opening of “Transformers: The Ride-3D” last year, Universal Orlando has launched its own Transformers 3D ride in Florida.

Universal Orlando has also partnered with Loews Hotels & Resorts to open a “dual-experience” property in 2014, to feature 1,800 family suites and standard rooms at both moderate and “value-based” price points.

SeaWorld Parks & Entertainment, with 11 theme parks in the United States, the most visited of which are in Orlando, San Diego and San Antonio, is celebrating its 50th year in 2014 with a host of new attractions, including family-friendly animal shows and rides.

“SeaWorld Orlando just celebrated the grand opening of ‘Antarctica: Empire of the Penguin,’ with a huge response,” said Peter Frey, senior marketing officer of SeaWorld Parks & Entertainment, in an earlier interview with IPW Daily. “The largest expansion in SeaWorld’s history, the new realm blends animal encounters with a unique trackless ride the whole family can enjoy.”

“Only SeaWorld Orlando can fully immerse guests in the thrilling, chilling continent at the South Pole that few people will ever experience,” he added. “Guests also meet a very special penguin named Puck, and it’s through his eyes that they learn about the challenges and beauty of this remote and frozen land.”

But the new attraction also offers experiences that go beyond the simulated. Its highlight, for instance, is a colony of nearly 250 penguins. Stepping off the ride, guests find themselves among a colony of Adelie, Gentoo, king and rockhopper penguins in a 30-degree (Fahrenheit) habitat filled with wind, snow, rocks and chilly water. Brrr!