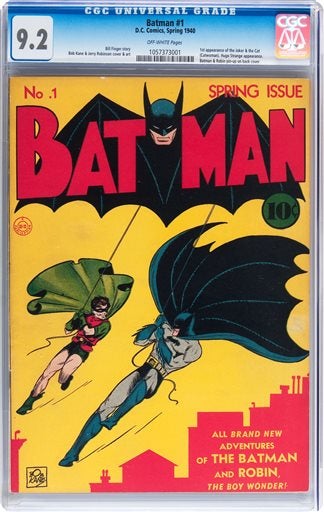 PHILADELPHIA— Heritage Auctions says the original pen and ink cover of “The Dark Knight Returns” No. 2 drawn by artist and writer Frank Miller has sold for $478,000 at auction.

A near-mint copy of “Batman” No. 1 has sold for $567,625 at the auction. The auction house said Friday that the buyers did not want their names disclosed.

Miller’s cover was the first to be sold from DC Comics’ 1986 four-issue “Dark Knight” miniseries.

The copy of “Batman” No. 1 from 1940 was auctioned on behalf of Tadano America Corp.

The record price for a comic book remains “Action Comics” No. 1, selling for $2.16 million in 2011. It featured Superman’s first appearance.