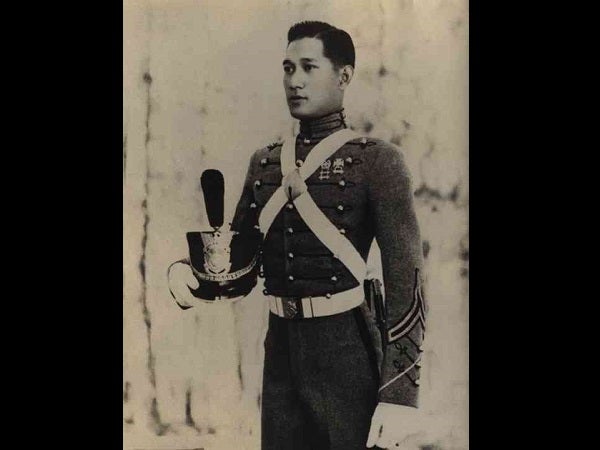 THE AUTHOR’S father as a PMA yearling in the ’40s

And that was how my father went, in his home, in his bed.

A month before this, he was rushed to the hospital with chills and a high fever caused by what turned out to be complications from renal failure. His kidneys were barely functioning, and the only life-prolonging choices left were hemodialysis every other day, or a transplant.

When told about his options, he refused them, and told his doctors to get lost. He dreaded each day he spent at the hospital, and while confined, became increasingly impatient and difficult; all he wanted was to be, in his own words, “officially discharged.”

My brother and I were made aware of the sad and grim facts and knew that without dialysis or the transplant he would not make it, but so did he.

After two weeks of monitoring his creatinine levels, he was finally discharged. We took him home and, for the first time since his hospital confinement, he smiled.

My father chose to die in the familiar comfort of his own bed, in his room. As he bravely awaited the end, he had strategized a method to face his last battle.

In the first week, back from the hospital, he ate a few spoons of oatmeal; in the second week, he drank only a high-calorie nutrition supplement; in the third week he stopped all food and drink.

His organs started shutting down one by one. Though much weakened by zero sustenance, his mind remained alert: no transfusions, no oxygen and no life-prolonging procedures.

He lay quietly in his bed, moving his eyelids or pursing his lips to acknowledge our presence. Looking at him this way, I realized that his irritability at the hospital was a rage against a kind of death he did not want.

He was mentally competent to reject medical intervention that was not curative. Besides, he did not look at death as an enemy; he looked at it as his last “posting,” something you face, no matter the place. For him, real life was doable; it was the uncertainty that spoiled it all.

He died, right after his parish priest gave him the last rites. He gathered his last ounce of strength to cross his arms and lay them on his chest in a final sign of complete submission, and seconds after, he passed on.

I remembered reading this line by Dante Alighieri in an old PMA Alumni newsletter: “E ’n la sua voluntade è nostra pace” (And in His will is our peace). Then I realized that, at 93, my father just wanted to attain a peace that conformed to Divine Law.

All throughout our lives, we had let him be a father to us in countless ways. Now, it was our turn to be dutiful children up to the end.

We followed his last wishes: He wanted to die in his bed. Check. He wanted to have his wake inside a military camp. Check. He wanted to be buried beside his parents’ graves. Check. With the help of childhood friends and playmates (now distinguished retired generals), from our happy pre-Global City Fort Bonifacio days, we were able to arrange for a beautiful military send-off that touched even the hardest hearts.

I can only imagine what his thoughts were during those last weeks. I do know that whatever going-away strategy he chose was one that needed absolute, unwavering focus and discipline.

As journeys go, his was a long and storied one. He trained to be a professional soldier at the Philippine Military Academy and belonged to the Class of ’44, a batch that was said to be “forged in fire like gold before World War II.” This class he belonged to got commissioned in the Armed Forces of the Philippines (AFP) even before their graduation. This was a group of young men, a brotherhood of brave hearts, who never had any graduation rites until their 50th anniversary; by that time, some of them had become casualties of war.

Graduation for this class was in the battlefields of Bataan, Corregidor, in the central plains of Luzon, the mountain ranges of Sierra Madre, during the Philippine Defense Campaign in 1941 until the Liberation of the Philippines in 1945.

It was a class with hard and bittersweet memories of the cadet corps, as yearlings who had their baptism of fire in World War II in 1941, in the Philippine Commonwealth Army, and as a US military force that was inducted and incorporated into the United States Army in the Far East (Usaffe).

After the war, most of them were sent to different parts of the United States for officer-training courses. They joined the ranks of their PMA upperclassmen and became the bedrock of a young republic’s Armed Forces.

Literally a handful from my father’s class of ’44 is left, most of whom are bedridden, wheelchair-bound and sickly. Only a wife of one of them came to the wake, her husband being too weak to leave their house. In her dignified presence and heartwarming stories, I saw the spirit of a brotherhood bound by courage, integrity and loyalty.

It is not only life we learn lessons from, but also death. In choosing to depart from this world the way he did, he took the darkness out of dying. While his 98-year-old father (my grandfather) chose a nice day to die when he went to sleep, after saying he was too tired to do anything else, my father, old soldier, chose to fade away and die. It was a final milestone that defined him.