Why disco doesn’t suck, after all | Inquirer Lifestyle ❮ ❯ 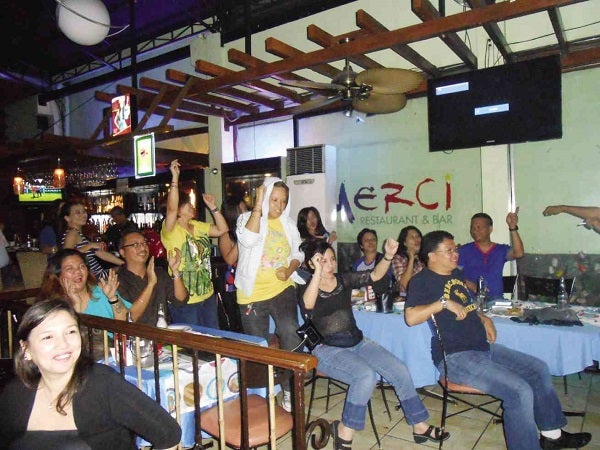 Why disco doesn’t suck, after all

But instead of blurting, “What the f… is Bruno doing?,” we broke into a smile because we liked the song’s slapping bass lines and funky guitar rhythms—in other words, old-school disco comes alive.

But what truly persuaded us to believe that, indeed, this was more than just passing fancy was when Daft Punk dropped its 2013 album, “Random Access Memories” (Sony/Ivory Music), whose first single, “Get Lucky,” was another hip-shaking disco track.

The most remarkable thing about Daft Punk—an electronic music duo—was that it hired an interesting lineup of musicians (Nile Rodgers, Nathan East, Giorgio Moroder, among others), plus an orchestra, to play live on the album which is mostly influenced by 1970s disco.

This led us to think that the music, an offshoot of soul and funk, never really died; it just sounded unfashionable to still call it disco after the likes of Madonna became a global brand in the ’80s. From then on, all music with an upbeat, restless groove was referred to as “dance” or, using the present lingo, “electronic dance music (EDM).”

In Metro Manila there are countless clubs with DJs playing all sorts of dance records. But that’s another story.

In the meantime, we’re happy to note that the nightlife in Makati and Quezon City remains vibrant with the sound of old-school disco performed live by a relatively young set of musicians.

At Martinis at Mandarin Oriental (Makati Avenue entrance) are two bands whose repertoire gets the crowd dancing. On Tuesdays, Mulatto plays classic disco hits almost non-stop on its second and third sets.

Jonathan Tamayo, one of the band’s two male vocalists, has a fine-sounding falsetto that relives the primal, sexual anxiety oozing in “Night Fever,” “More than a Woman” and “Staying Alive”—all of which are from the soundtrack of “Saturday Night Fever,” the movie that transformed disco into a phenomenal worldwide trend.

Many of the tunes Mulatto plays can be too familiar (“Rock With You,” “Get Down on It,” “Telephone,” etc.), although what makes it seem fresh and exciting is the band’s horn section composed of saxophonist Harold Llanes and trumpeter RJ Danal.

But perhaps its biggest attraction is female vocalist Anna Jomeo, who does a bubbly rendition of Black Box’s “Everybody, Everybody.” We’ve seen Anna in previous Mulatto gigs for the past several years at Strumm’s, but she now sings with more oomph at Martinis.

On Saturdays, also at Martinis, the band Mismo is the featured act with its own horn section—William “King” Ansano (sax) and Joseph Cabañero (trumpet)—that gives the music a brassy kick.

Mismo can be unpredictably amusing when it plays a set of Pinoy ballads (“’Pag Tumatagal Lalong Tumitibay”) and disco hits (VST’s “Disco Fever,” Ella del Rosario’s “Mr. Disco,” Leah Navarro’s “Ligaw Tingin”). But its covers of more VST plus Boyfriends stuff can verge on boring, because it seems like every other variety-music band in town also plays them.

But what sets Mismo apart is its lineup of three women who all sing effusively well: Kearny Baldeviso, Trisha Fernandez and Laura Austria. Kearny, also the bandleader, is a picture of elegance and confidence in her version of Viola Willis’ “Gonna Get along without You Now,” while Laura does a desperately affecting rendition of the Donna Summer hit “Heaven Knows” while playing percussion.

The band’s cover of Van McCoy’s “The Hustle” proves irresistible for the crowd to get up and dance, as male singer Jong Cuenco alternates on lead vocals and flute.

Kearny, a former member of Mulatto and a survivor of heartrending personal trials, tells Inquirer Lifestyle that she had to wait for quite sometime before she could form her own band. “Sabi ng manager ko, hintay-hintay lang ’pag nagkapera siya…’ E biglang tumama sa lotto sa US, kaya heto ako ngayon, hahaha!”

Over at a bar called Merci (83 Timog Avenue, QC), the Zoo band performs a mix of ’80s rock and vintage disco tunes every Friday. Rock and disco? Tell that to a certain bunch of La Salle boys of high school batch ’81 and they would either stare at you with disdain or laugh with sarcasm.

But if we all look back on it seriously, it’s not difficult to understand that disco was a form of rebellion from the excesses of late-’70s rock, specifically heavy metal. Disco was a natural extension of Motown and funk—from the sensual, sometimes earthy vocals to the stylized choreography.

At Merci, Zoo’s rock medley of Queen classics are authentic and moving, although its disco covers (“Staying Alive,” “You Should Be Dancing”) are a bit disconcerting because lead singer Neil Baruelo—a dyed-in-the-wool musician who has spent years performing abroad including cruise ships—breaks his voice while trying to stick to the original falsetto parts of Barry Gibb.

Otherwise he and the rest of the band, composed of Neil’s real-life brothers Jowi (guitar) and Badz (bass), and Edgar Mendoza (keyboards) and Ricky Ruiz (drums), do an excellent job with the rock ’n’ roll stuff—which ends with a spine-tingling rendition of Metallica’s “Enter Sandman” and Aerosmith’s “I Don’t Want to Miss a Thing.”

The crowd goes crazy with delight.