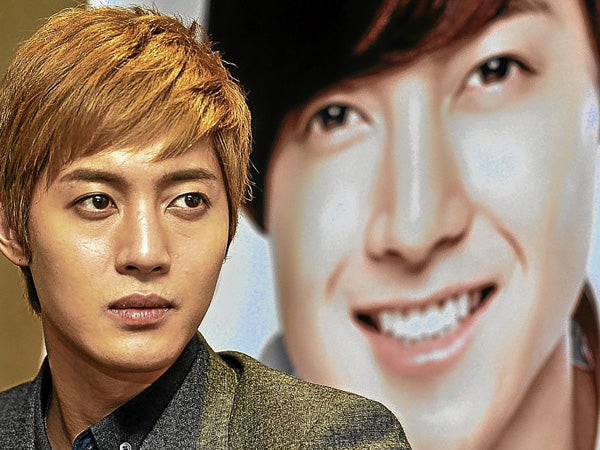 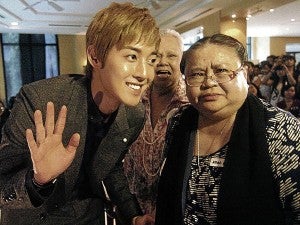 Like most young people his age, Korean pop star Kim Hyun Joong savors the chance to travel the world over as The Face Shop’s brand ambassador. But he’s also the first to admit that traveling for days on end could take its toll on his skin.

“I can’t tell you my favorite Face Shop product because I use a lot,” he said in Korean, through an interpreter. “If ever there’s one, it would be E’thym moisturizer.”

He also emphasized the importance of using sunblock and moisturizer, especially in a tropical country like the Philippines. Even men, he said, are well advised to shield their skin from the sun’s strong and harmful ultraviolet rays.

Fresh from a show the night before, Kim faced the media, including a number of bloggers and fans, Friday last week at the Rockwell Club to talk a bit about his career, including his advocacy of helping Abiertas, a temporary home for disadvantaged single mothers.

Dressed in a form-fitting dark-gray suit and sporting short strawberry blond hair, the singer-actor, who was first seen by Filipino fans two years ago in the Korean soap opera “Boys over Flowers,” looked fresh and none the worse for wear.

He started endorsing The Face Shop almost exactly a year ago. Established in 2003, the brand has made a name for itself as a high-quality cosmetics and facial-care brand that uses “natural” ingredients such as flowers, grains, fruits, mineral water and even oriental medicine.

The Face Shop is now said to be the leading natural cosmetics and skincare brand in Korea, and is represented locally by Suyen Corp., the same company behind Bench. The brand is sold in 25 stores nationwide.

“The Face Shop has its own growing following in the Philippines,” said Lim. “The presence of a Korean pop star like Kim to endorse Face Shop is always welcome. It definitely strengthens the brand.”

Both the brand’s makeup and skincare lines are doing well among Filipino women, said Lim. He attributed this to the fact that The Face Shop products are “friendly” to Asian skin. And like Filipinas, Koreans are also fond of skin whiteners.

Part of the deal he forged with The Face Shop is for Kim to fly to any of the 22 countries outside Korea where the brand is present. The Philippines happened to be the last leg of his Asian tour, which also included doing a series of shows and personal appearances.

In keeping with the dictates imposed by his handlers, Kim remained curt and a bit evasive about his answers even to seemingly harmless questions. When asked, for instance, what make-up style on girls he finds “incorrect,” his interpreter reminded journalists even before the star could answer of a supposed agreement between Kim’s camp and The Face Shop for him to avoid answering “personal” questions.

In his attempts to be evasive, he ended up mouthing a number of motherhood statements.

And if he were to choose between acting and music, it would be “like asking a child whom do you love best—mom or dad.”

But he did reveal that he loves the scent of coconut oil. Kim said he learned about it when he had a massage last year while visiting Cebu. This prompted host Grace Lee, a Manila-based Korean DJ, to ask aloud a naughty question in English who that “lucky” masseuse could be. All the while, Kim appeared—or perhaps tried to appear—clueless.

Kim’s best, most candid moments were on full display with fans Patria and Maru Ragasa, the mother-and-daughter team who won an auction of the Korean heartthrob’s heather-gray sports shorts. He gamely posed for pictures with them soon after giving each woman a kiss.

Proceeds from the auction plus donations worth P500,000 from The Face Shop Philippines went directly to women of Abiertas, one of several charities Kim supports the world over.

How the Ragasas won the bid is a story in itself. Maru, a judge and stroke survivor, was thinking of an ideal way to celebrate her mother Patria’s birthday. She ditched an initial plan to throw a party when she learned that Kim was auctioning off a number of personal items he used last year during his Philippine trip.

From a minimum bid of P10,000, Maru ended up shelling out P100,000 for charity. It was also probably her way of saying thank you to her mother, an avid Kim fan and her primary caregiver. Patria’s bedroom, said Maru, is on its way to becoming a shrine to Kim.

“I’ve been to the Philippines before, but this trip is a little more special for me because of the chance to work for our unfortunate sisters,” Kim said. “Thank you and don’t forget [to keep] the warmth in your hearts.”