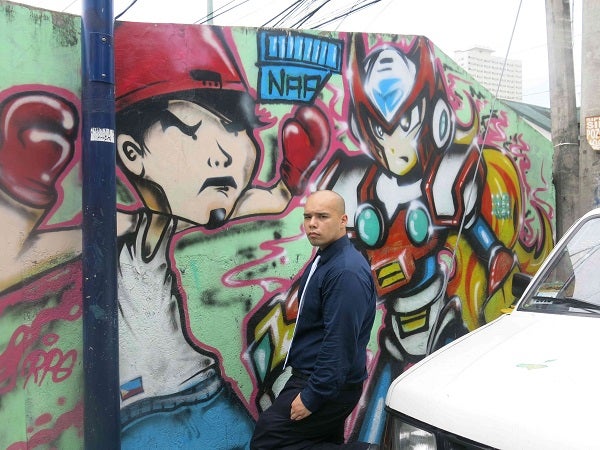 SONGALIA: “I had options and I chose to live in the motherland.” Photo by Carissa Villacorta

‘Not a real Filipino’

I’m not an easy guy to offend.

Born and raised in New Jersey, I come from a culture of casual ribbing, where teasing someone with the most vulgar, personal remark is done in jest as part of male bonding. The context—non-verbal communication and underlying camaraderie—is what keeps this kind of nonchalant tradition from escalating.

About a year and a half ago, I relocated to Bonifacio Global City (BGC) in Taguig, in part because I needed a break from the rat race that defines life as a journalist in New York City. I also felt this genuine desire to strengthen my bonds with my heritage. It’s a sad reality that Filipino-Americans are not taught much about their ancestral culture. Even Tagalog is spoken more out of novelty than necessity in the US.

While living within the plush, gated community of Serendra, I can see several barangays (villages) from my balcony. My curiosity and desire for adventure eventually led me to explore those areas, which are far removed from the sterilized, almost neutered, environs of BGC. A five-minute walk past SM Aura, over a bridge that leads to C5, brought me to Barangay Pembo.

It’s everything that BGC isn’t; it has sari-sari (small variety) stores, tricycles and even the occasional rooster. In essence, it “feels” like a more authentic Filipino experience.

Wearing cargo shorts, a striped button-down shirt with the sleeves rolled up, a Yankees hat and all-white Nike Air Force Ones, I could feel that all eyes seemed to be fastened on me as I walked by.  I brushed the attention off, figuring that maybe it was because it’s a neighborhood where everyone knew each other, and I was merely an unfamiliar face.

As I approached a sari-sari store, I figured I’d use the opportunity to practice my rudimentary Tagalog and purchase a pack of Skyflakes Tsokolate, which has become a guilty pleasure of mine.

“Magkano ba ito (how much is this)?” I asked, in an accent that gives away my Northern Jersey roots. “Anim lang (only six bucks),” said the young woman behind the counter, giggling a bit. I took a second to calculate, then remembered that anim meant six, and pulled out two coins to complete the transaction.

As I stood there mapping my route out, I could hear an orchestra of giggles coming from behind the counter. All three of the ladies behind the counter were now visibly laughing. Amused as well, I asked them in English, “What’s so funny?” The youngest, who seemed to be the most proficient in English responded, “Because you’re not a Filipino.”

There was no vulgarity, nor was my mother’s honor besmirched. Still, that simple, innocuous phrase cut me to my core. “Not a Filipino?” I digested that notion for a while as I walked along the road, dodging tricycles and cars. “Not a Filipino?” Suddenly, the stares that I encountered felt less innocent and more penetrating. Glaring. Forbidding, even.

I’ve heard statements like that before. An acquaintance recently asked if street children frequently bother me for peso bills. “Why?” I asked. “Because you’re white,” she responded. Which isn’t untrue, since my mother is Italian-American, and I have more of her facial features than my dad’s. My complexion could be described as fair, though no one would mistake me for being of Spanish descent.

Still, I find it much easier to relate to “The Sopranos” than that local teleserye, “Ina Kapatid Anak.”

Growing up as one of the shorter kids in my elementary school, I was often bullied by kids much larger than me. The slurs I heard didn’t make fun of my relatively light complexion, or New Jersey accent. They made fun of my slanted eyes, my Asian features and ethnic surname. Bullies would call me “chink,” or “Chinaman,” or even “poodle muncher.” One kid would tease me by calling me a Hawaiian which, though inaccurate, was still amusingly creative.

Still, it underlines my quagmire: I’m too white to be Filipino, and too Filipino to be white.

So, if I’m “not a Filipino,” then what is a Filipino? Is it only someone who is a native born to the Philippines? Is it someone who is fluent in Tagalog, and is able to carry on a conversation about the dramas that play on local networks?

Filipinos are a global people, with a significant presence in many countries throughout Asia, Europe and the Americas. When I look up at billboards as I ride the jeepneys along Edsa, or when I watch the television programs here, I see a lot of faces that look like mine. And it doesn’t seem to matter that very few of the Azkals are Philippine natives whenever they win international soccer matches.

The issue of cultural identity was one that I often examined as a child growing up with family members who were of European, Chinese and African-American descent. My father, who was born in Leyte but hadn’t been back until I was already grown up, never spoke much about the Philippines, except when discussing Rolando Navarette, Andy Ganigan and other Filipino boxers he appreciated in his younger years. My mother is fond of saying that I’m not one thing, but a mixture of the many influences I was surrounded by in my melting pot of a family and community.

Make no mistake about it: New York City, where I had lived most recently in America, is a great place to grow up in, as a writer. But I left the familiar, comfortable surroundings in New York for the Philippines, where nothing was guaranteed for me. I had options, and I chose to live in the motherland.

I’ve carried the Philippine flag in New York, shouting through a bullhorn as Filipino-Americans protested China’s incursions into the Spratly Islands. I never miss a Philippine Independence Day parade, have sat through P300-an-hour Tagalog lessons, frustratingly trying to get a grasp on a second language. I’ve helped build homes for typhoon victims in Navotas and specialized in bringing Filipino boxers to the international spotlight through my work with The Ring magazine.

So the next time someone brings into question the authenticity of my Filipino roots, I’ll give them the same message that the smell of freshly baked bibingka screams out to me: Bite me.