Why this 11-year-old’s figure skating is a miracle, no less | Inquirer Lifestyle ❮ ❯ 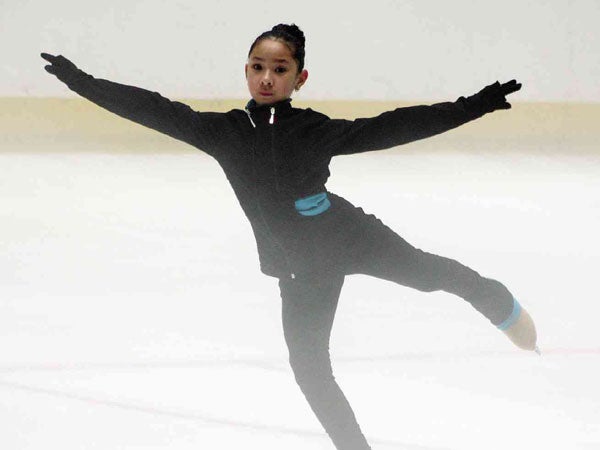 HER DREAM is to join the Olympics and represent the Philippines: “I want to be the first to do it.” PHOTO BY KIMBERLY DE LA CRUZ

Why this 11-year-old’s figure skating is a miracle, no less

It is still quite early in the day, just before lunchtime, and already dozens of kids and adults are enjoying themselves as they whiz past each other on the ice skating rink of SM Mall of Asia.

Most of them are probably into ice skating as a hobby. But the observant eye easily spots a young girl standing out from the rest as she zooms with confidence, spins like a top, and executes various moves not unlike those of a ballet dancer.

The girl is Sofia Guidote, who was five years old when she first tried ice skating at SM Southmall. Now, at 11, she’s set to compete in the Asian Open Figure Skating Trophy 2013 to be held from Aug. 8 to 11 in Bangkok.

Figure skating refers to the type of ice skates used in the sport, to distinguish it from hockey, bandy, racing and touring skates.

Every now and then we see Sofia taking a spill. She tells Inquirer Lifestyle that she’s working hard on perfecting her “double axel”—or two-and-a-half rotations in the air, with a forward jump. It’s said to be the most difficult part, the highest type of jump for her level in figure skating.

“After that I will go for the triple axel and land on my right leg,” she points out.

Aiming for the Olympics

Her dream is to join the Olympics and represent the Philippines: “I want to be the first to do it.”

Sofia may sound too ambitious for her age, but such focus is the result of a series of victories she has been scoring the past years.

A year later, in the same tournament in Beijing, she won a gold medal in the Pre-Novice category and clinched another special award for best performance.

Last year, when the competition was held in Hong Kong, she grabbed three golds.

And just last April, she got a silver in the Basic Novice A division at the International Skating Union (ISU) World Development Trophy. The ISU regulates international figure skating judging and competitions, including the Winter Olympic Games.

The wonder of it all is that Sofia—the youngest and only girl among three siblings—was born with a mysterious defect in her lower body that almost prevented her from walking.

“She was nine months when she was diagnosed with dislocated hips, meaning there was no ball and no socket,” Sofia’s mother, Kathleen, recalls.

“We were so thrilled at finally having a girl, so we were always carrying her, and sometimes the yaya and I would hear a clicking sound in her leg. We thought wala ‘yan, the boys were like that also…”

When Sofia tried to stand from her crib, the clicking sound didn’t stop with every little step she took.

Appraised of this rare condition by Sofia’s pediatrician, Kathleen and her husband Manny took their baby to three doctors, who all said they have to open her up, break the bones, reshape them, and put her legs in a cast for six weeks.

Kathleen was not keen on the procedure: “I called my niece who’s a pedia in the States. She said casting is difficult to take care of; we need a support system. Then we found a doctor at UST who asked us if Sofia had undergone MRI (magnetic resonance imaging). The doctor said that if there were no damaged ligaments, closed-reduction casting would do.”

After the MRI, Sofia’s parents were alarmed by the doctor’s findings. “The doctor said, ‘I’ve never seen anything like this. There are no ligaments. It’s like looking at a three-month old,’” Kathleen recounts.

For the next nine months, Sofia wore a cast from above the waist to her knee. “The doctor asked for prayers,” Kathleen says, “so that her hands would be guided in the process.”

Tears well up as Kathleen continues: “It’s like a little miracle. By the grace of God, both legs were saved. Now her strength is her legs!”

Manuel reveals that Sofia’s condition is now a case study at the University of Santo Tomas.

As far as ice skating is concerned, Kathleen says that the family never influenced Sofia to get into it: “It was she who decided what she wanted to do.”

Adds Manny: “The first few years, we felt fear every time she fell.”

Sofia remembers the first time a friend casually invited her to go ice skating at SM Southmall. It was a “play date” that she enjoyed. She started doing it twice a week. Things got serious and she went ice skating every day when she turned seven.

She says she got into the sport “because it’s challenging and also fun to do the programs and competition. I wanted to win, or get second or third place.”

Kathleen says that there are no cash prizes in figure skating, only medals. “But it’s the second most expensive sport in the world after equestrian,” Manny points out.

Training is expensive. “Private lessons with a Russian coach cost 120 euros an hour,” says Manny. “Training on the ice with eight others costs 16 Swiss francs for 45 minutes. And then there’s off-ice training which is $80 an hour. For us that’s really mabigat. That’s why now we’re in panic mode (laughs). We never thought it would escalate to this level.”

Manny estimates that he will spend $10,000 a month for Sofia’s training abroad.

Adds Kathleen: “If you’re really making tipid, it’s $6,000. We’re trying to figure out how to get sponsors.”

A few weeks after the interview, Sofia flew to Switzerland to train with a Russian coach. She’ll be practicing with the Swiss and Russian national figure skating team.

Sofia will compete in the Basic Novice A level in Bangkok. Last year, there were 22 competitors for that level, of which only three will receive medals.

“It will be good for her because she will be among champions,” Manny beams.