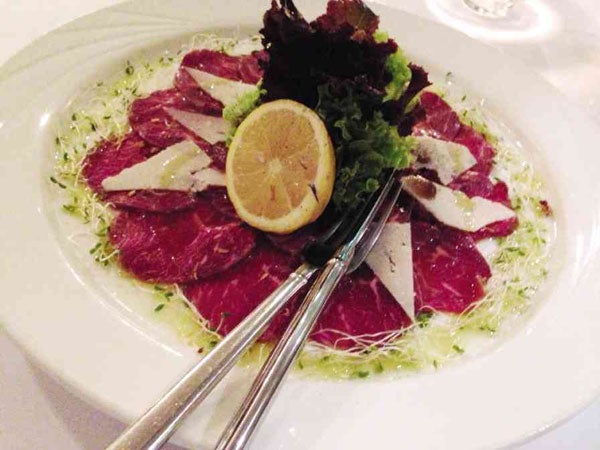 Around the time I started writing about food, the Edsa Shangri-La opened and shocked the establishment by not having a French fine-dining outlet. In fact, there was no fine dining as such, but a smart casual but rather upscale restaurant called Paparazzi.

Italian food was on the upswing then, and L’Opera went from being the only game in town to one of many major players, including ones with waiters who burst into song and tiny ones cramped into spaces barely larger than a burger stall.

Italian food was great for people who didn’t know how to cook because it was thought to be more about being good at shopping rather than being skilled in the kitchen. It was great for would-be gourmands because it trumpeted authenticity and provenance over complicated preparations.

Most of all, it was great for restaurants because a plate of pasta with a bit of sauce, or a thin-crust pizza with a few bits of meat strewn atop, could be sold for a lot of money.

Cibo, which celebrates its 15th anniversary this year, is one of the success stories from that era, though today its insistence on top-quality ingredients has driven prices up.

We fell out of love with Italian food when the economy went down and, when it came back in, we were seduced by shiny new Asian franchises and had awoken to the fact that Mario Batali is actually rather annoying.

Not great, not terrible

Caruso, on Reposo Street, feels like a restaurant that arrived about 15 years too late. It’s not great, but not terrible, which unfortunately doesn’t leave me with very much to say about it.

L’Incontro, on the same street, is still the better restaurant if you’re in an Italianate frame of mind in that part of town, but rather than being familiar and comforting it just feels world-weary and a bit sleepy.

One of the few Italian places that I’d drive to, rather than walk to the refrigerator for, is Chris Locher’s My Kitchen, but it’s a fairly long drive.

We accidentally visited an Italian restaurant recently, entirely against our will. It was raining hard, and the radius we wanted to explore away from home was getting smaller and smaller. We finally decided to visit one of my favorite Filipino restaurants, Sau del Rosario’s Villa on Yakal.

By the time we had gone up and down the street a few times to check if it had truly disappeared, swallowed by the maw of vulcanizing and tint shops, we found ourselves flooded in on both sides of the street, and so ended up at Carpaccio to wait out the rain and the drains to do their work.

Here’s a dining experience to disprove the myth that Italian food is only about the ingredients and the chef’s job is only to arrange them artistically on a plate.

Carpaccio is one of the Werdenberg restaurants, and thus has direct access to what is literally the largest and best-stocked refrigerator in the country, a huge chilled warehouse where everything good and imported to eat is flown in.

I’ve never yet had the opportunity to complain about too much carpaccio, which is usually scrappy and thin and over before one has truly begun. But these were thick, determined slabs of meat that resisted being cut, being chewed, and being enjoyed.

The rest of the meal, up until the osso buco and the requisite tiramisù, had the same dogged correctness and complete lack of flair to it, like a sonnet being read aloud, very stridently and syllabically, by a text-to-speech program on the computer.

It was not terrible so much as a missed opportunity, a beautiful restaurant with great ingredients badly in search of someone with creativity and dynamism to man the tiller.

But it’s not just Italian food I miss, but getting excited about Italian food, rather like e-mail, which we now take for granted. I’m not sure whether the Italian wave was a phase rather than a revelation, or that it was too successful and changed the landscape so thoroughly it became part of it.

One is now just as likely to get golden, perfectly crunchy friabile pizza than spongy bread dough; real parmesan cheese than sawdust in a sprinkle can; tomato ragù that’s tangy and savory rather than sweet and milky, at least in the major metropolitan areas.

Perhaps its obsolescence as a fad was built into its premise, because the one thing we loved Italian food for—its simplicity—is why it ultimately lost its fascination for us.