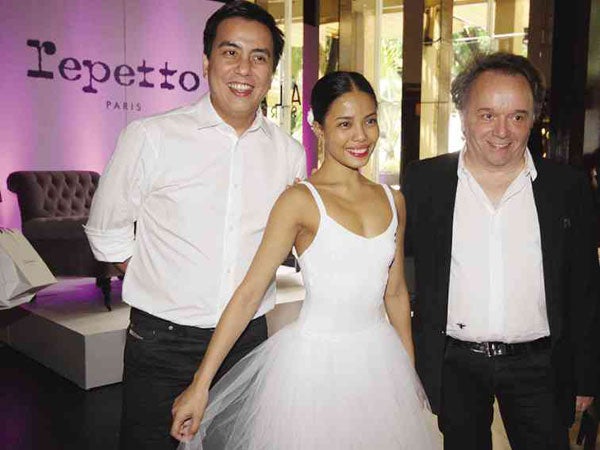 It is Repetto CEO Jean-Marc Gaucher’s first time in Manila. “I think I could live here. The weather is good, the people look very nice; I could stay. Except for the traffic,” he says. “I saw the jeepneys, I love them. They are beautiful.”

“I have no socks, they’re very soft shoes. I used to have normal shoes, but I gave them all away and now wear all Repetto,” Gaucher says.

On an ordinary man, the ensemble paired with white shoes may have looked costume-y, but Gaucher had that innate French flair that makes everything look effortlessly chic.

The same casual French elegance is a constant theme in Repetto’s line of dance-inspired shoes, bags, apparel and, recently, fragrance. Just like many French luxury brands, Repetto is rich in history and an almost cinematic backstory.

The brand was started in 1947 by Rose Repetto at the behest of her son, Roland Petit, France’s well-known dancer and choreographer who was looking for comfortable dance shoes.

Using a stitching technique called “cousu retourné” (stitch and return) typically used for gloves, this method of stitching soles inside out and then returned allowed the shoes to become supple and comfortable.

The success of Repetto’s early ballet shoes led to a collaboration with Brigitte Bardot in 1956, giving rise to the iconic ballerina flats associated with the brand.

“Brigitte Bardot was a dancer. She went to see Madame Repetto and said, ‘I have been selected to be in a movie (“And God Created Woman”); I would like a pair of ballerinas,’” recounts Gaucher.

“Madame Repetto didn’t know how to make ballerinas, she only knew how to make ballet shoes, but Brigitte Bardot wanted shoes that showed the beginning of the toes, which was sexy. Madame Repetto did this, and Bardot became an icon. There is a picture of her lying on a car with her red Repetto shoes, and they became famous everywhere. It was the beginning,” adds Gaucher.

Repetto saw a decline in the late ’80s after Madame Repetto’s death, but Gaucher brought the brand back to life when he acquired it in 1999. By repositioning Repetto as a luxury brand and doing limited-edition collaborations with designers such as Issey Miyake and Yohji Yamamoto, Gaucher built a brand now recognized worldwide for its fine craftsmanship.

Today, the brand is rapidly expanding across Asia and America, with a clientele of Hollywood A-listers and fashionistas.

In Southeast Asia, the Philippines is the first country to have an official Repetto boutique, ahead of Singapore and Indonesia. The partnership is between Repetto and Philippine distributor Suyen Corp. (of Bench fame and other notable franchises).

Repetto’s CEO is happy with the brand’s growth in the Philippines. “We already opened one store and we are opening two more. It’s going well,” he says.

Gaucher credits Repetto’s success to its muse: dance. “We are a dance brand… When a woman has known dance, she has a different walk, a different attitude, and when she wears Repetto we want to give her the attitude of a dancer,” he says.

Repetto’s line is inextricably linked to dance. The Zizis Gaucher wears, for example, were inspired by jazz.

The leather totes were designed to be slouchy and made from butter-soft leather for a dance-related reason.

“It was a dancer’s request to make a bag of soft leather so they can sleep on it while waiting during rehearsals. The bag has a big opening for dancers to put their stuff in, and they can easily open their bags to see what’s inside,” says Gaucher.

Even the shoe styles are all dance-inspired, so chances of seeing a sky-high Repetto stiletto are slim.

“The heels we choose always come from dance. The best shoes you can buy are the ones in which you feel beautiful. The shoes have to be functional and comfortable—this is our obligation,” he says.

This obligation to comfort extends to ballet, a world very dear to Gaucher (he is administrator of a ballet company in Biarritz).

“Many men dream about dancers,” Gaucher says with a wink. “But the first time I saw the feet of a dancer, they were horrible because they are suffering so much, so why can’t we do something different? Is the performance better because of suffering?”

This led Repetto to work with dancers and a university specializing in technology to produce a ballet shoe that was comfortable and reduced the shoes’ noise onstage by 66 percent.

“The first responsibility to the brand is profit, otherwise we’ll die, but after, it’s not enough to make profits. I’d like to give back something. We opened a school to teach how to manufacture luxury products. In January 2014, Hermès will join us to show people how to do luxury products.”

Rose Repetto’s “stitch and return” shoe technique, developed 66 years ago to create comfort and suppleness,  is still the cornerstone of  Repetto.

The brand is proud of the fact that the handmade shoes are exclusively done in France, in a workshop in Saint-Médard d’Excideuil, where 2,500-3,000 pairs are produced every day.

Gaucher says, “We have something unique. Once you wear a pair, you always buy again, so why should we change this?”