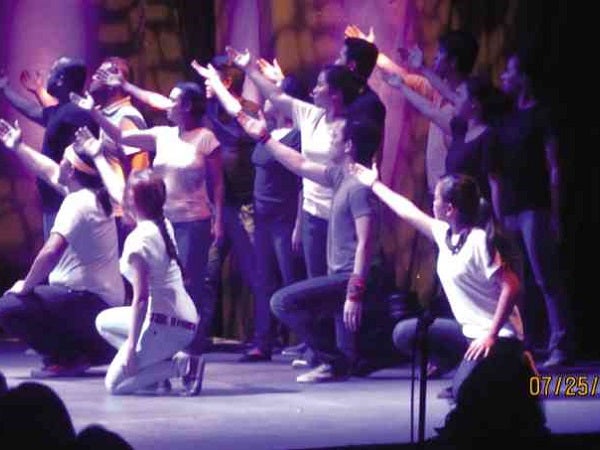 ART OR advocacy? Says director Maribel Legarda: “We will try our best to be both—for the show to be enjoyable and entertaining while being content-heavy.” Photo by Amadís Ma. Guerrero

It’s a twice-told tale. Actually a tale told many times over in the recent past: the martyrdom of former Sen. Benigno S. Aquino Jr., the rise to power of his wife, President Corazon C. Aquino, and their powerful legacy.

But this project promises to be a bit different, bringing with it a multiple point of view, the magic of musical theater and a dazzling array of talents.

The production is “Pamana” (A Father, A Mother, A Nation), a docu-musical tribute to the Aquinos produced by the Ninoy and Cory Aquino Foundation (NCAF). The music is by Ryan Cayabyab and Fr. Manoling Francisco, S.J. (of “Tangin Yaman” and other beloved hymns fame), with script by Rody Vera, stage direction by Maribel Legarda of Philippine Educational Theater Association (Peta) and musical direction by Vince de Jesus.

The cast is led by Malou de Guzman as Lola Azon, a street sweeper during the Marcos regime; her son Edgar (Jett Pangan), her granddaughter Trina (Kakki Teodoro) and her husband Turo (Bodgie Pascua).

The male and a female ensemble will have choral support from the A-listed Viva Voce, which is directed by leading operatic soprano Camille Lopez-Molina.

Video director and executive producer is Jun Reyes of NCAF.

The story unfolds through the 1980s and the early 21st century. Historical footage includes the funeral procession of Ninoy and then Cory’s, with their hundreds of thousands of mourners. Each in their own time, Lola Azon and Tina are deeply affected.

Edgar, however, remains unconvinced. He is disillusioned by the scandals and corruption of the post-Edsa I and II periods and migrates to Canada, in the hope his family will join him later.

During the open forum, a newsman asked the panel about current online efforts by Marcos loyalists to rewrite history, project the late dictator as a hero and, by implication, put down the Aquinos.

“There will always be people who will try to destroy … (distort history),” said Reyes.  “But Ninoy and Cory chose what is right.”

For Rafa Lopa of the NCAF, “what is important to us is for the next generation to really feel Ninoy and Cory, what they have achieved.”

Pangan indicated that this will not be the last show about the Aquinos, “because people tend to forget…”

Legarda said the docu-musical has several levels: “It is the story of a simple family—they take the view of Everyman. There is the chorus of 20 and the Viva Voce choir. And on a third level, we see Ninoy and Cory speaking about themselves. Their voices are captured in sound, their voices are heard. It is very sparse staging, very stylized.”

Lopa called it “a story of hope, of Filipinos finding inspiration in the heroism of Ninoy and Cory. It’s a love story with each other and with the country.”

Legarda went further: “It’s an epic story of love for each other, an act of selflessness, love for country. The couple took that leap. So the country and the community have the responsibility to do better.”

So, is the show art or advocacy?

“We will try our best to be both—for the show to be enjoyable and entertaining while being content-heavy,” said the director.