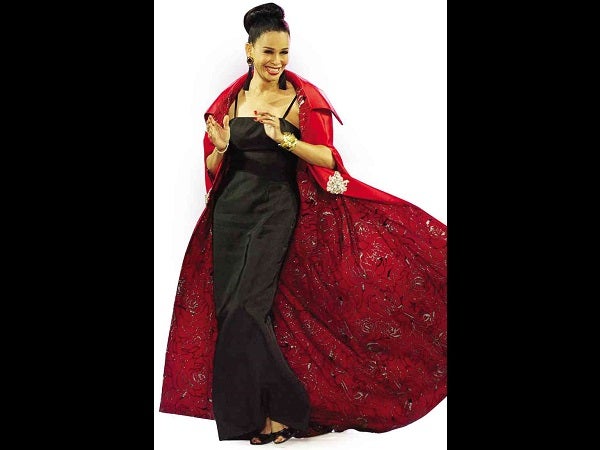 It’s been a while since people caught a glimpse of Melanie Marquez as a ramp model. And what a surprise, unannounced appearance she did recently at the finale of designer Criselda Lontok’s 30th anniversary show at Raffles-Fairmont hotel in Makati.

“I love it,” she told Inquirer Lifestyle on the phone, referring to her rare guest stint on the ramp, and also to her otherwise domestic life as wife to Randy Gleave Lawyer—incidentally a lawyer by profession and owner of a ranch in Utah where the couple live with their two children.

Melanie has been living in the US since 2000, when she married Randy, or Adam as she calls him. They travel thrice a year, usually to spend time in the Philippines.

As it turned out, she was in Manila when Criselda’s show was being planned. The production people got in touch with Melanie through another designer, Renee Salud, her “discoverer.”

“Pag sinabing anniversary, go ako,” she said, adding that she has also obliged similar requests for shows by Ben Farrales, Pitoy Moreno and other fashion icons in the past.

“I’ve never worked with Criselda,” she said, “and it was also my first time to be directed by Jackie Aquino. I just wanted to make people happy.”

Happiness is a state of mind that Melanie apparently has had in abundance in recent years. Life as a “cowgirl” riding horses and getting busy with chores in a quiet town may sometimes give her the blues, but those are just minor kinks—certainly not enough to cause her marriage to a fourth husband to go awry again.

She married her three exes, she admitted, but all of these unions were legally dissolved. She didn’t know her first marriage was a sham when she got hitched to then actor Lito Lapid, who didn’t tell her he was still married to another woman, recalled Melanie.

She first met Adam at Edsa Shangri-La in 1998. “It was a group date with Vic Vargas and Rosanna Zamora,” Melanie recounted. “I would never go on a blind date.” Rosanna was her childhood friend, so Melanie agreed to meet Adam, even if she had no idea who he was.

She didn’t fall for him easily, saying she liked him but was not interested in a new romance. But soon he courted her and persistence paid off.

“He’s intelligent, hardworking. I like older men, somebody I can learn from and depend on,” she said.

And what has she learned from Adam for the past 13 years?

“Patience,” she said. “I’m strong, independent, walang pasensya. I learned how to be submissive.”

For the first time, Melanie revealed, she discovered “what marriage is all about”—something she had almost forgotten in the years she had been a single parent.

And that meant learning to accept Adam’s apology whenever they would not see eye-to-eye. “He would always say sorry. He knows how to make cariño. Alam niya ang kiliti ko. Malambing siya,” said Melanie.

Expect to see more of her in the next few weeks on television, as she has committed to a few offers to guest on shows on ABS-CBN and GMA 7.

By the end of the month, she goes back to being a cowgirl in her husband’s Utah ranch.