From Meldy Cojuangco to Melanie Marquez –what a night | Lifestyle.INQ ❮ ❯ 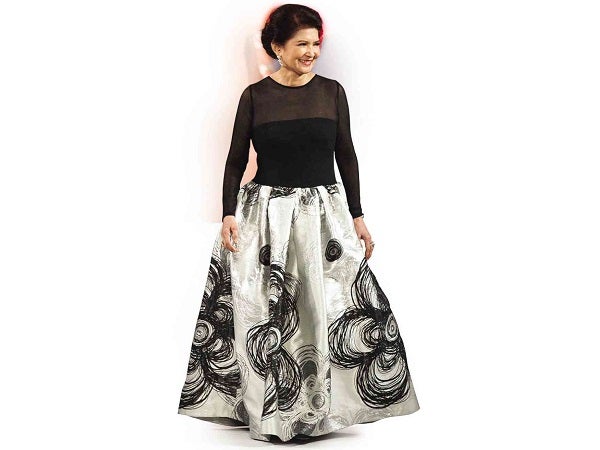 From Meldy Cojuangco to Melanie Marquez –what a night

Speaking in a clear and enunciated way, Cojuangco extolled the virtues of Lontok as a friend and a designer. After all these decades, we see how well Imelda speaks with poise and sophistication yet sweetly and clearly. By all indications, Meldy Cojuangco could be the next leading lady or “numero uno” commercial endorser. She is a consummate actor in the best possible sense, confident of her lines and projection.

Nedy Tantoco, the only other fashion icon in the video, described Lontok as part of the Rustan’s family for the past three decades. Nedy spoke of the rich history of how designer labels such as Criselda flourished in their stores, ushering fashion retail into the brand-new century.

It was Nedy’s mom, founder and fountainhead Gliceria “Glecy” Tantoco, who built the Rustan’s empire of high-end retail fashion; who mentored Lontok when she was first tasked as merchandiser for beautiful blouses in the ’80s.

Monday’s formal event was like a roll call of old guard society. The women came in full force, in long dresses, blooming in hot-house colors and bedecked in sparkling jewelry.

It was “Criselda Club” members who have been her best friends, forever supporting the label that is for mature women in plus sizes. The label has always been known for its elegant designs.

Huge florals were the core inspiration of the new collection, La Vie en Rose. All silk numbers were seasonless, with a resort feel to them, perfect for Manila’s sultry weather. Giant daisies provided a ’60s vibe; the design was the crowd favorite.

Cut away from the body in bias or trapeze forms, Lontok’s outfits were at once figure-flattering and age-appropriate.

The solo finale was 1979 Miss International Melanie Marquez, who could still pirouette like a prima ballerina, with that little-girl smile still so seductive.

Towering above the cast, she wore an opera coat over a tube and walked like the Super Model of the World she once was.

Raffles PR queen Monique Toda made sure everyone had a sip of bubbly and a taste of the most mouthwatering appetizers. Everyone was in celebration mode.

The list of dashing gentlemen was led by Ambassador Bienvenido Tantoco, with his handsome grandsons Anton and Mike Huang, and Donnie Tantoco. His granddaughters, Crickette and Dina Tantoco, led the standing ovation for the wonderful collection.

I had to agree. The evening was a coup de couture.