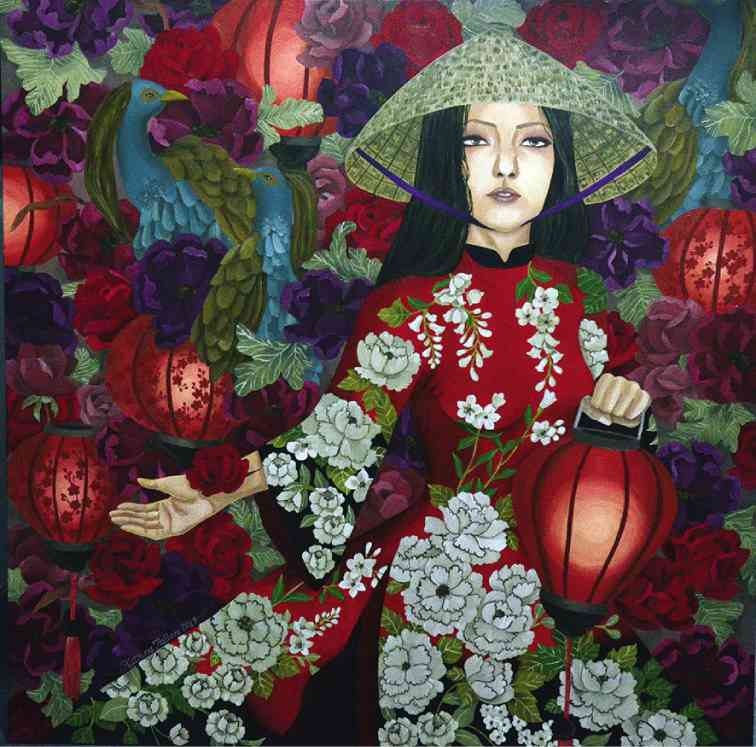 No mysterious air surrounds her, and perhaps that is what lends most to her mystique. She comes, she goes. She embarks on her travels, a few days here, a month or two there.

This wisp of a child-woman has engaged in a discovery of her Asian roots, traipsing through the nooks and crannies of Thailand and Hong Kong, to the less-traveled routes of Vietnam, Laos and Cambodia, before yielding to the irresistible pull of India and Nepal.

Each homecoming is followed by an outpouring of veiled thoughts and emotions on oil or acrylic on canvas.

Inspired by German symbologist Gustav Klimt and the dynamic renditions of Frida Kahlo, Mexico’s painter of renown, Katrina or Kat Pallon has employed a feast of colors, symbols, and enigmatic women figures in her canvases.

“Ceasing to Bleed” shows a woman in Vietnamese attire surrounded by a halo of flowers and brilliant colors, her arm outstretched, sporting a long, savage gash but blood no longer streaming from it. It was done, according to the artist, after having suffered from a deep, personal loss which she didn’t elaborate.

“After her last solo exhibit, ‘Resurgence,’” an art critic writes in the notes to her new exhibit, “artist Katrina Pallon has become the ferryman transporting her captive audience across the underworld river: In her upcoming exhibit, ‘Illuminata,’ Pallon now takes us through a grim, mystical nether-region of lanterns, cranes, skulls, and roses.”

“As a reflection of her current emotional status, her works reveal a transitory state, a tunnel that leads to the light: It is the ending night with the break of dawn visible from afar; that quickly fleeting, terribly beautiful moment when you hold your breath in anticipation.

“Executed in the artist’s trademark maximalist style, ‘Illuminata’ mythologizes both Pallon’s recent travels across Southeast Asia. Whence before Pallon’s women had been in a state of mourning, the characters in her current exhibit are now in transition—wading out of their entanglement, rising from the emptiness, slowly beginning to dissipate.”