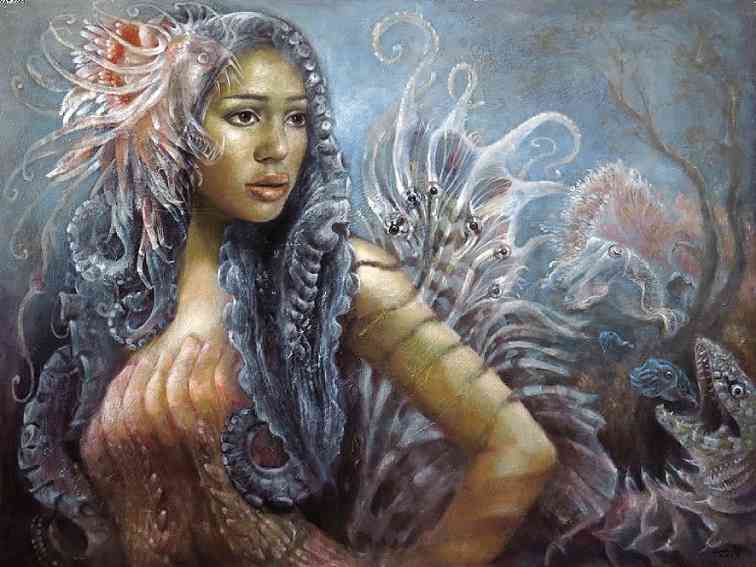 “THALASA (Goddess of the Sea)”

Galerie Artes harnesses Woman Power in the works of two artists coming from different generations, but together generating sparks and sparkle in the show, “Mist in the Realm of the Subconscious Mind.”

Despite the onerous title, crystal-clear images emerge with the insistence and tenacity of assertive presences.

To be sure, this first time tandem show of Lydia Velasco and Camille de la Rosa unleashes imaginings of the subconscious that burn with the perfervid heat of womanhood.

“We all know the face and hands of the figure, set in its marble chair, in that circle of fantastic rocks, as in some faint light under the sea… Hers is the head upon which all the ends of the world are come, and the eyelids are a little weary. It is a beauty wrought out from within upon the flesh, the deposit, little cell by cell, of strange thoughts and fantastic reveries and exquisite passions. Set if for a moment beside one of those white Greek goddesses or beautiful women of antiquity, and how would they be troubled by this beauty, into which the soul with all its maladies has passed.” Thus, the paean of the Victorian critic Walter Pater to “the most recognized painting in the world” and “an icon of the Renaissance.” She is the Mona Lisa.

By turns venerated and vulgarized, the Mona Lisa is the most appropriated image in Western art. She has been portrayed in the most irreverent manner. One recalls a Pop Art rendition of the Mona Lisa as a plump Italian woman holding a bottle of spaghetti sauce.

Appropriation is also Velasco’s approach to the Mona Lisa, and the artist has portrayed her as a Virgin Mary, her visage crowned, while her hands, in typical Velasco style, are large, expressionistically outsize. Velasco has affixed her mysterious smile as a knowing approval of the Filipino woman artist, as though to signal that she takes no offense, that she is “on” to this visual game.

The other Da Vinci masterpiece which Velasco appropriates is titled “Portrait of Cecilia Gallerani” also known as “Lady with an Ermine.” The animal is a weasel, “a slender, active carnivorous mammal” that preys on rabbits, and which turns white in winter. In Velasco’s reworked version, the weasel has been transformed into a snake, coddled by the lady’s impressively large hand, on which is a wound rendered by crucifixion. It is a richly puzzling work, complex in its implications. The Blessed Mother has always been portrayed  with a snake crushed underfoot. And yet Velasco’s lady cradles the viper lovingly. The hand wound, however, unmistakably alludes to the Crucified Christ, thereby making a comment that is too heretical to contemplate.

A prolific artist, Velasco has created a large body of work concentrated on the Filipino woman figure rendered singly or in groups. Invariably they are engaged in typical activities that often bring to mind the women of Anita Magsaysay Ho. But there the similarity ends. Velasco’s women are massively drawn, seething underneath with a sexual tension that invigorates the women of Gauguin.

An artist of impressive visual persuasions, the multifaceted Camille de la Rosa assumes a bloom of varied personas in her suite of works that configure the flower as her personification. It is indeed tantalizing to regard these paintings as De la Rosa’s self-portraits, covertly masquerading as dream episodes in an opera where the artist plays the leading lady.

Her works are intrepidly revved up with phantasmagoric costumes and headdresses, referencing a surrealistic setting on earth and under the sea. These are works that would send Lady Gaga into paroxysms of delight.

“Chloris (Goddess of Flowers)” is literally shaped by unfolding petals, agitated and awakened out of limbo, her wide eyes glistening with wonder. The painting absorbs the viewer, drawing him into the interstices of a mysterious flower.

Highly charged with her teary-eyed gaze, “Flora (Goddess of Spring)” is discerned as a creature of intense longing, not quite the expected joyous emanation of the season she represents. What resonates in visual terms is the flamboyance of emotion. If staged as a performance, she has lamented her heart out in a stupendous aria.

Grisly elegance clothes “Sohelas (Goddess of Insects),” holding court amidst a throng of claw-like appendages, loathsome in their furry resplendence. The obsession with insects is queasily fetishistic, their renditions so fastidiously painted as to inspire terror.

As though she were willed into existence by a fashion stylist, “Thalasa (Goddess of the Sea)” rules the waves while fearsome sea creatures seem to bubble up hosannas to this classical beauty. The paintings’ decorative excess generates its own appeal, fanciful and theatrical. Thalasa’s steady, lambent gaze vanquishes the sea monsters, even as she shimmers with oceanic light.

De la Rosa exalts the extreme femininity of her sex. In this regard, she is a feminist with the instinct of a humorist.