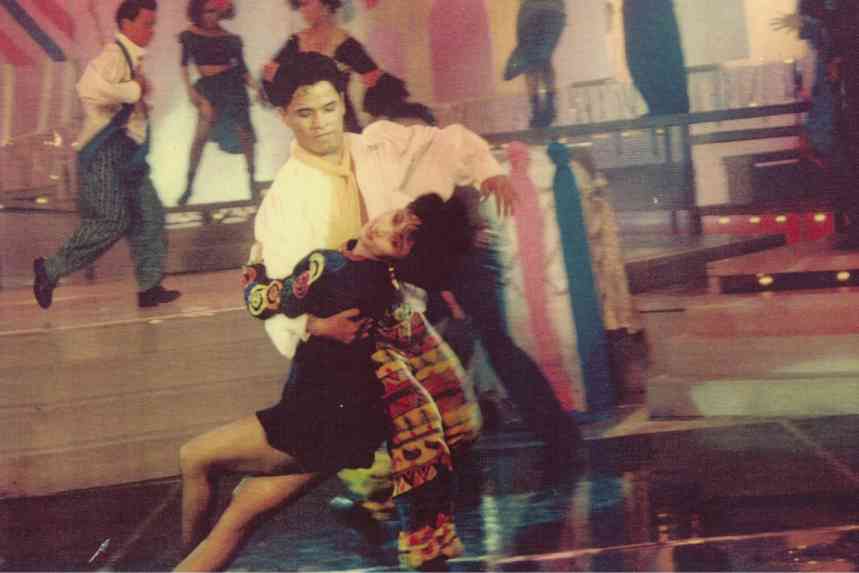 WITH Vilma Santos as her most reliable partner in the halcyon days of “Vilma!”

In recent years, dance in worship has become an increasingly popular element of church services. Depending on the denomination and the training of the performers, a dance may be a choreographed balletic piece, a fusion of contemporary styles, or free movement, integrated in the service.

Choreographer-teacher Eugene de los Santos notes that the religious-themed dance is not a diversion from a ritual, but a means to bring souls closer to God.

He says performers should have the right attitude and the right technique. “If they are not fit, they won’t be effective.”

A dancer of the defunct Dance Theater Philippines (DTP), De los Santos believes dance is drawn from the spiritual. He hopes that through dance in worship, people would realize the importance of going back to basics.

De los Santos has been performing and choreographing for churches and special religious events.

His journey began at 16 years old when he studied under Felicitas “Tita” Radaic. Although it was a late age to start classical ballet, under Radaic’s exacting tutelage, De los Santos developed precise footwork and clean lines.

With two years of rigid training under the English style, specifically the Royal Academy of Dancing syllabus, De los Santos joined DTP, the resident company of the University of the Philippines.

A turning point came when the company performed “Misa,” a collaboration with DTP, composer Ryan Cayabyab and the UP Concert Chorus.

Choreographed in 1984 by Basilio Esteban Villaruz, the dance celebrated the parts of the Mass with a sociopolitical content. The central figure was a martyr, a man in a white jacket and pants, the same attire worn by Sen. Benigno Aquino when he was assassinated.

De los Santos asked Villaruz why he created a dance version of “Misa,” which is based on the Catholic Mass, even if he was a Protestant. The choreographer had been touched by Cayabyab’s dramatic choral arrangements. The dancers interpreted the Latin words through their limbs.

“Misa” included a male solo on “Our Father,” based on Freddie Aguilar’s song “Sa Ngalan ng Ama.” De los Santos was fortunate enough to perform this in several performances.

“Misa” was presented at Manila Cathedral in 1985 with President Corazon Aquino as a special guest.

In 1995, he performed a solo for Pope John Paul II at the Quirino Grandstand as part of the World Youth Day celebration. He interpreted the Prayer of Saint Francis (“Lord, make me an instrument of Your peace”)—elevating the message into a moving experience.

As the only classically trained dancer in the ensemble, he was most trusted partner of the Star For All Seasons. He coached Santos on stretching her feet for aesthetic purposes, and taught her the classical pas de deux lifts.

With De los Santos as mentor, Vilma was able to do an overhead lift in an arabesque position and the fish dive.

(She has lately deglamorized herself to play the role of a movie bit player, perhaps much like De los Santos in his heyday on “VIP,” in her celebrated indie movie debut, Jeffrey Jeturian’s “Ekstra,” for which she won the Best Actress award in the Directors’ Showcase of the recent Cinemalaya festival. “Ekstra” will have a regular commercial run starting Aug. 14.)

While surviving in the commercial world, De los Santos felt he was “being called back to the fold.” Although praise dance is common in Protestant and Born-Again evangelical fellowships, he choreographed pieces with religious themes for the Greenbelt Chapel, a Catholic chapel, for eight years.

Introducing dance into the service challenged churchgoers to engage more their hearts and minds. De los Santos’ choice of music was diverse, from liturgical songs to even a Muslim melody that accompanied the theme of the gifts of the Holy Spirit.

De los Santos had worked with young adults with no dance training but who were enthusiastic to express their faith through movement.

He explained that dance was devotion, not a performance; it was putting one’s best before God. Although praise dance was fulfilling, he quit when the group grew too large and unwieldy to manage.

“With 36 years of dance experience, I want to encourage people to develop the gift of dance or the appreciation of it,” says the 48-year-old choreographer.

In religious services, movement and music can be more uplifting than words. Church or fellowship-goers respond better to sensory experience, he says.