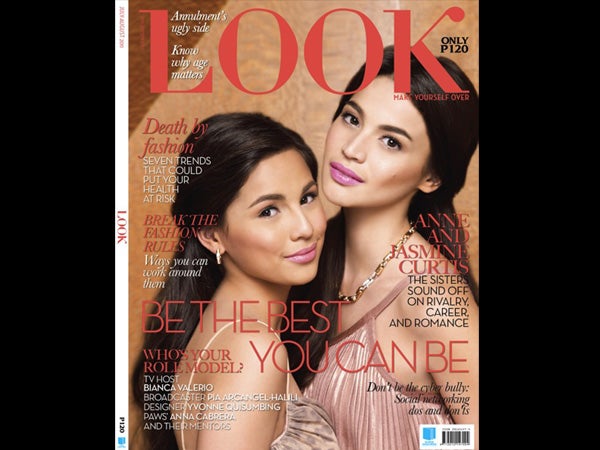 Anne and Jasmine Curtis: The sisters sound off on rivalry, career, and romance. 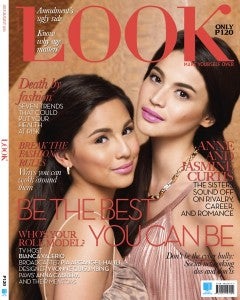 Anne is the established actress and gorgeous top endorser, and Jasmine is fast following in her footsteps. But the strong emotional bond between these two is no put-on, as they proved behind the scenes of their fabulous shoot

IF network executives were to cast Anne and Jasmine Curtis together in a soap opera, they’d have a certified hit in their hands. Not only would they benefit from the star power of two of the most beautiful sisters in local showbiz these days; they’d also have access to perhaps two of its best and brightest talents.

And in the convoluted world of the teleserye, where no tear ducts stay dry for long, the sisters’ ability to easily step into their respective characters’ shoes and cry buckets are welcome. Plus, the on-cam rapport they have as sisters who seem to genuinely care for and respect each other is priceless.

For the first time in LOOK’s history, upon the request of Betchay Vidanes, the sisters’ business manager, the shoot’s behind-the-scene preps were streamed on line with Jasmine, who arrived several hours before Anne did, as a willing and able subject.

In less than an hour, Jasmine had already drawn the attention of more than a thousand “Jasters,” the term her handlers use to describe her loyal fans, from as far as Italy and India. Not a few skipped school and work just to watch the event.  A number even threw in their comments, which the budding star tried to acknowledge.

And what about Anne? People, by now, know her caliber as an actress. With a number of industry awards tucked under her slim belt, Anne, 26, blossomed from a perky teenager, who knew “zero Tagalog,” into one of the country’s most sought-after leading ladies and product endorsers.

Anne was barely 13 and vacationing in Manila with her family from Australia when a talent scout spotted her in a fastfood joint.  With her parents’ blessings, she lost no time signing up as one of Viva’s talents. Even while in high school, Anne didn’t stop basking in the limelight.

“In between my showbiz commitments, it took me forever to finish high school,” she says with a hearty laugh. “That’s why during my senior year at Angelicum, some of my classmates were already calling me ate (big sister) because I was obviously older than them. I always told them off in jest.”

As bigger, more lucrative offers started coming her way, Anne had no choice but to put college on hold. After being drawn initially to nursing, she has now set her sights on taking up early education.

“I guess it’s the nurturing side in me,” she reasons, when asked why she’s interested in such people courses. 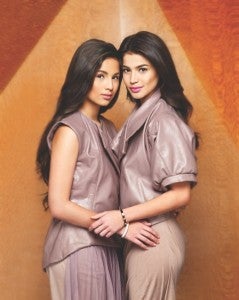 Anne is probably just being true to her real-life role. She may not relish being called ate in public, but she embodies the part in private not only to Jasmine, but also to their 12-year-old brother Thomas.

Jasmine, 17, attests to this. She looks to Anne for almost everything, including the clothes she wears for this shoot. Anne is decidedly the more polished dresser. But Jasmine, who dresses more for comfort, is learning fast.

When she’s in Manila, Jasmine still lives with Anne. They still share the same bed and swap stories of how their respective days were, until one or both of them fall asleep from sheer exhaustion.

“There are times when we hardly see each other because of conflicting schedules,” says Anne. “But I make it a point to call or message her every so often.”

Still, big sister can’t help but weigh in on her kid sister’s choices. While Anne was being dolled up, for instance, she still managed to look over her shoulder to see what outfit Jasmine was going to wear for the next frame.

“Are you safe?” she asks, to which Jasmine nods.

Those within the sisters’ inner circle knew where Anne was coming from. Having experienced a wardrobe malfunction on TV, Anne, like a concerned mother hen, just wanted to make sure that Jasmine was spared the trouble.

“Yes, I do feel responsible for her whenever she’s here,” says Anne. “More so since my parents are not around.”

Their mom has opted to stay in Melbourne to look after Thomas, while their dad is based most of the time in Pampanga.

The fact that there’s a nine-year age gap between them allows little room for sibling rivalry, says Anne. She may be older, but she proved to be more of the joker, teasing Jasmine at every opportunity during this interview by either mimicking her or making faces as she answered questions.

Jasmine can only smile and protest meekly, “allow me to finish.” But she can play naughty, too. At one point, she balls a piece of facial tissue and throws it at Anne. 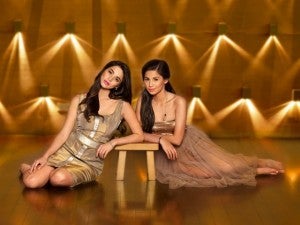 But unlike Anne when she was just starting, says Shelley Aleta, her former road manager, Jasmine is more streetsmart and can be left to fend for herself during interviews. Aleta now works with Jasmine.

“Anne was so young and came from a totally different world,” she says. “Jasmine was much older when she entered showbiz. She had a clearer idea of what she was getting into.”

That may sound like an eternity ago, but it was only last December when ABC 5 signed her up in the network’s bid to develop fresh talents. The offer, Jasmine admits, was too good to refuse.

Alas, you can kiss your wish of seeing the two in one TV show goodbye (at least, for the meantime), as both sisters work exclusively for different channels. But Anne, who’s tied to ABS-CBN 2, is open to the possibility of them starring in a TV ad together.

Apart from the presumably handsome package Jasmine is getting from Channel 5, the network is willing to work around her schedule. The crew even flew to Australia, where Jasmine spends most of her time, to shoot some of her scenes there.

Jasmine finished elementary in the Philippines, which explains her ability to speak Tagalog like a jeepney driver, before moving to Australia for high school.

She has more than a year to go, but makes it a point to fly to Manila during extended breaks to attend to her budding showbiz career. Among the first things Anne warned the sleep-addicted Jasmine about are the long, crazy hours.

“High school students there get two-week breaks after two to three months in school,” Aleta explains. “You’d be amazed at Jasmine, because she flies all by herself to Manila and back without a chaperone.” 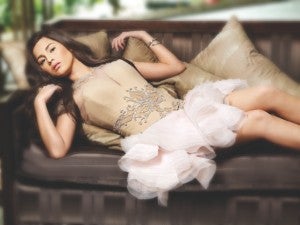 Anne’s, who’s obviously brimming with pride at her sister’s early feats, reacts with a mixture of mock envy and sarcasm, “Taray mo, girl.”

“She’s paved the way for my career,” says Jasmine, who, as a little girl, used to visit Anne on the set before ending up sleeping in her ate’s bed. “She’s given me an amazing start. Sometimes people watch me because they know I’m her sister. To me, that’s such a privilege.”

Trying to make light of her sister’s generous description of her, a self-effacing Anne can only manage to make faces and say “achoooo.”

Not only do Anne’s fans follow Jasmine, they’ve also defended her from nasty attacks in cyberspace. Following Anne’s lead, for instance, they gave a guy on Facebook a dose of his own medicine after he made lurid remarks about Jasmine.

Between the two, Jasmine, who, like her big sister, got her pan-Asian good looks from their Australian father and Filipina mother, is more of an unknown entity as far as acting goes.  That is, until she reveals how vulnerable and easily pliable her emotions are.

Less than 10 minutes into this interview, for instance, Jasmine’s mood changed from bright and cheery to sad, almost to the point of breaking down. For a moment there, even Anne was taken aback by her sister’s reaction to our seemingly benign question: what do you admire most about your ate?

“Well, I’m not going to make her head swell, but, you know, of course, I admire everything about my sister,” says Jasmine of Anne.

“What do you mean?” asks an incredulous Anne. And before she can say another word, Jasmine begins to sob. “Why are you crying, baby? Naiiyak na tuloy ako. Ano ba ’yan?”

“I don’t know,” Jasmine manages to shoot back, trying to hold back her tears. “Wala, she’s so much…I can only dream to achieve everything she’s done.”

The emotional build-up, it turns out, happened much earlier when Anne expressed nothing but praises for Jasmine’s acting when she visited her on the set of “Ang Utol Kong Hoodlum,” a teleserye, which also stars JC de Vera, set to premiere this September.

“She did a crying scene,” says Anne. “I found it funny, but in hindsight, she’s cute. She’s really good. At nakaiyak agad with tears! I was so proud of her.”

Jasmine, after regaining her bearings, admits as much. “Yes, it’s easy for me to cry,” she says. “In fact, all my scenes so far in Hoodlum required me to cry. But I have no power yet to control it. I often end up feeling drained.”

It seems being a crybaby runs in the family. When their mom threw a presentation ball, Australia’s equivalent of a debut, for Jasmine in Melbourne recently, Anne and their dad flew in from Manila and made a surprise appearance.

While the host shared Jasmine’s wishes to be “as selfless as her mother and as intelligent as her father,” Anne stole a glance at their old man and saw him crying. Before long, all of them at the table, she says, were shedding “tears of joy.”

When it comes to matters of the heart, Anne, who’s currently dating Erwan Heussaff, (PLS CHECK SP) claims to be one of the last persons to know about Jasmine’s affairs.

Anne even goes as far as to admit that she sometimes “steals” Jasmine’s cell phone to find clues about her sister’s activities. Jasmine can only make feeble protests about her right to privacy.

“I just want to know,” Anne reasons. “Of course, I’ve been there, done that. I won’t get mad if I find out that she’s keeping certain things from me. Siguro tampo. When we were in Australia recently, I asked her if she’s dating anyone. Sabi niya, no, so okay. But I know I can’t protect her all the time. She has to find out certain things about life herself.”