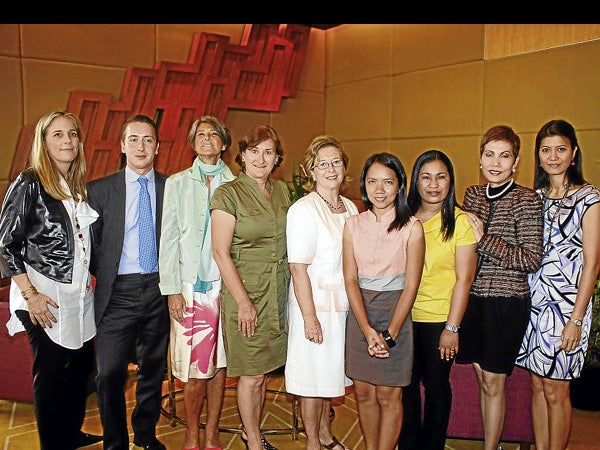 Diplomatic spouses to walk the runway for charity 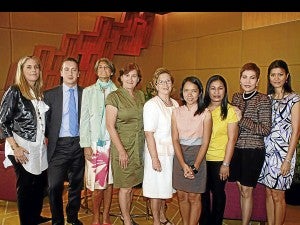 DIPLOMATIC SPOUSES may seem like a rarified group, attending social functions, entertaining VIPs, taking up painting or dancing, playing mahjong, visiting the gold collection at Ayala Museum or hearing lectures on advocacies such as Gina Lopez’s Pasig River cleanup. Ultimately, it is social service that gives meaning to their posting.

“Charity is the focus,” said Susanne Cotton, wife of New Zealand Ambassador Andrew Matheson. Next week, the ambassadors’ spouses are taking charge of the runway for a fundraising event. They’ll be modeling clothes from event presenter Rustan’s in “The Cruise Collection,” May 24 at Diamond Hotel. Childhope Asia Philippines, an NGO devoted to the welfare of street children, is the beneficiary.

The event will be participated in by 18 diplomatic wives and their “token,” Kostas, husband of Greek Ambassador Polyxeni Stefanidou. They will be wearing the summer collections from Sinequanone, Façconable, Tadashi Shoji and Laundry. 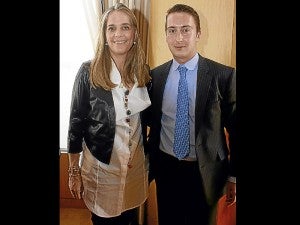 The show will be directed by Jackie Aquino and the makeup will be done by Rustan’s brands such as Nars and Laura Mercier.

The fashion show was initiated by Eleonora de Strobel-Hannikainen, the Finnish ambassador’s wife and cousin of the Italian ambassador. She recalls that many years ago when her husband was posted in Denmark, she was inspired by a retailer who ran an haute couture boutique. When the diplomatic wives modeled the clothes, the event was a crowd drawer and generated income for their charity.

Madame Strobel-Hannikeinen said the event is about “normal clothes for normal women.” Through her son Leif-Erik, Rustan’s personal shopper and frontliner, the ambassadors’ spouses were able to establish a partnership with Rustan’s.

The younger Hannikeinen, Erik to friends, explained that the spouses will sport two looks—day-to-night dressing and formal wear.

“We’ve got all sizes to cover all fields,” he said. Normally seen in dark business suits or barong, the ambassadors will be wearing off-hour clothes such as sports shirts, nautical attire and light-color summer linens by the British label Hackett and the French brand Façconable. 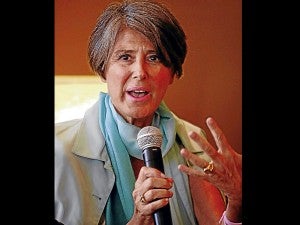 Erik has been the best “ambassador” to this event. After graduating from Oxford, he worked for Freshminds, a consultancy group famous for strategic marketing. While posted in the Middle East, he did liaison between the Palestinian authorities and the EU diplomatic corps. His foray into fashion retail presented itself when he came to the Philippines.

Asked if the models will get to keep the clothes, he replied with a smile, “There is a strong incentive for them to purchase it.”

Also present at the press conference were Madame Silvana Fornari, one of the moving forces of the show, and Gracita Tolentino-Siebert, wife of the Swiss Ambassador.

Madame Tolentino-Siebert left the Philippines 31 years ago. She lived in New York for 15 years working for the United Nations Development Program where she met her future husband. She has been to seven postings and speaks German and French.

On two occasions, she had modeled for similar fundraising fashion shows organized by the ambassadors’ spouses in Bangkok and London. She expressed her gladness in coming home, enjoying the big-heartedness of the Filipinos, and that her two children would be immersed in Filipino culture. 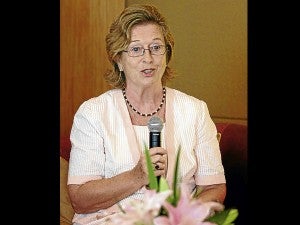 Madame Cotton spearheads the ambassadors’ spouses’ altruistic activities. The group has been supporting Childhope. Since she came here in 2008, she has encountered the Aetas of Mount Pinatubo, visited the depressed areas in Tondo, Cerebral Palsy Institute, Philippine General Hospital, Little Sisters of the Assumption mission apostolate in Malibay, Pasay, and Marilag hills and Tahanan Sta. Luisa, as well as shelters for young abused girls.

She said living in a developing country like the Philippines opened her mind and heart particularly when she was exposed to the harsh realities of poverty and exploitation. She hopes the diplomatic spouses can “help alleviate some problems even if it’s just a drop in the bucket.”

She pointed out that the biggest fundraiser comes from the annual International Bazaar wherein embassies import goods from their countries just for this event. Last year, it raised P3 million, of which the proceeds were given to 11 charities. 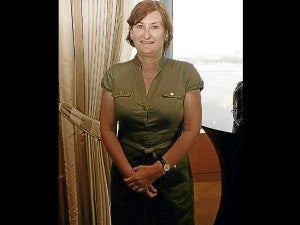 Although the “Cruise Collection” is of a lesser magnitude, it’s a more fun and glamorous way to espouse a cause.