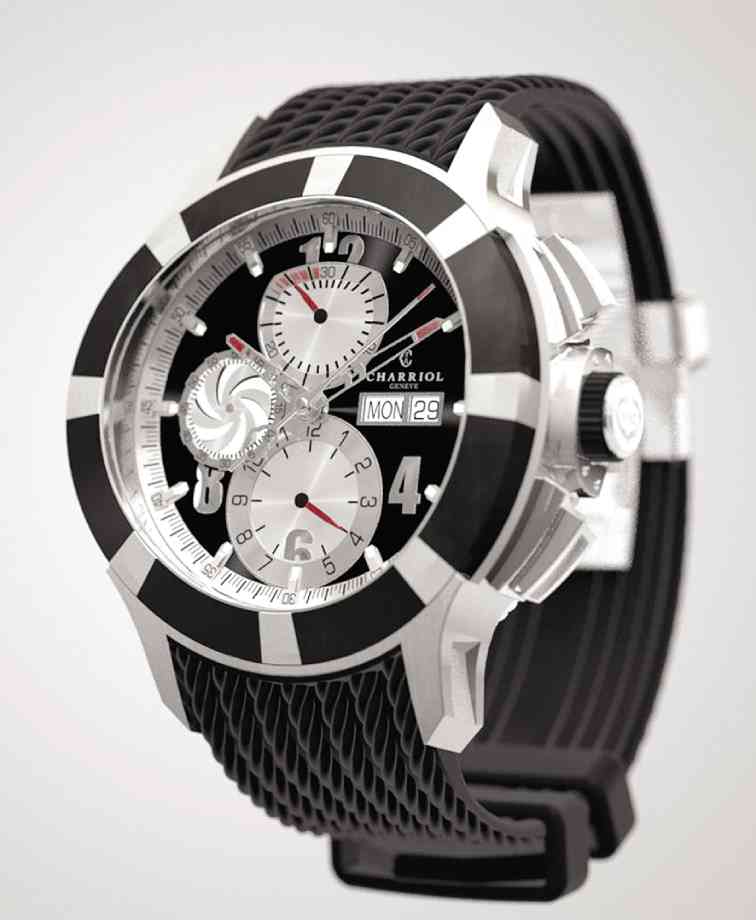 At the annual gathering of the world’s eminent watch and jewelry brands in Basel, Switzerland, in April, Geneva-based luxury house Charriol unveiled several limited-edition watches, along with its 2013 range, to mark its 30th anniversary.

The 2013 Columbus collection is the third generation of the line that was first created in 1988, five years after Charriol was founded, said Antoine Lecomte, who launched the 2013 watch and jewelry collections recently in Manila. Lecomte is Charriol’s area manager for Asia-Pacific, who has been responsible for the Philippine market since 2007.

“This year, we’re relaunching Columbus with a total new look, with a big size for men at 46 mm, and 36 mm for the ladies,” Lecomte said. The new Columbus Grande Date GMT will have only 300 pieces made, while the Columbus Power Reserve will have only 30 pieces. A third model will have only three.

There’s also the Columbus Lady Automatic, sporting a stainless-steel case with a black crocodile leather strap, and Columbus Lady Precious, with 169 diamonds set in a wave-like pattern on a mother-of-pearl dial. The wave is a nod to Columbus’ ocean voyage.

The watch category comprises 40 percent of Charriol’s global business, according to Lecomte, who also underscored the changes the brand is undertaking to mark its 30-year milestone. The brand has commenced with its 18-month plan to renovate all existing stores, though the new boutique that just opened at Bonifacio High Street Central in Taguig still sports the old look.

“Charriol is going to change totally with the new store concept, although we’re keeping the DNA of the brand—the cable motif, the logo, the color,” he said. “We expect our stores to be fully renovated by early 2015.”

Charriol is bullish about growing its business in the Philippines, where it’s enjoying the loyal patronage of Filipinos all the way to Mindanao, via its local partner, Stores Specialists, Inc. In fact, when Zenaida Tantoco, SSI president, attended BaselWorld in April, Lecomte said, “she spent most of her time at our booth.”

At present, Charriol has 16 boutiques across the country, with a couple more scheduled to open this year, including one in General Santos City by yearend.

“We’ve been in Cebu for some time, and we have also opened in Davao and Cagayan de Oro,” said Lecomte. “In Cebu, we have a lot of customers coming from Mindanao, so we decided this time to go to them.”

Like his boss, Charriol founder and chair Philippe Charriol, Lecomte is a frequent Philippine visitor, who has gone from diving in Palawan to “chatting with the tarsier in Bohol.”

“We are doing so well here,” he said. “We just opened in Robinsons Magnolia. It has now reached the top 10 of our stores here. It’s surprising because it’s a residential area and a new mall at that.”

At the recent post-Basel event held at the Peninsula Manila, Lecomte and company also unveiled the other watch collections via a new two-minute movie campaign and a fashion show. There were the St.-Tropez, Celtica and Ael watch collections, as well as the Forever Young, Paisley, Tango, Double Eight, Square & Circle and Tiger jewelry collections.

Even with these new collections, Charriol keeps going back and updating its signature cable motif, which appears on the bracelets of the watches. The Ael, which means “angel” in Celt, is suggested as the perfect first Charriol watch for young women, with a stainless-steel case and cable encircling the case, and five white or black cable bracelets.

For the 30th anniversary, Charriol also created St.-Tropez Plum, a women’s watch sporting the house signature color of plum on its case and mother-of-pearl dial, with stainless steel and

The 30-mm St.-Tropez also comes in four other themes that are a nod to the French holiday town. The Sun style sports a sun motif at 12 o’clock; the Seashells variant has seashell patterns etched on the dial. The St.-Tropez Love has the word “love” etched on the dial, but is only visible away from the light, while a floral motif is etched on the mother-of-pearl dial for the Flowers variant.

As for the jewelry, Charriol is sending out cuffs, bangles, rings and bracelets that are reinterpretations of its classic twisted cable styles, done in steel with yellow or rose-gold PVD for the Forever Young range. The star is a thick, 69-mm cuff with a crisscross pattern encasing stacked cables.

The Tango range was inspired by creative director Coralie Charriol’s Argentina jaunt, with entwined silver-thread motifs that are reminiscent of the passionate dance.

Coralie Charriol also designed new styles for what the company calls the “timeless elements”—Double Eight, Paisley, Square & Circle, and Tiger—some with diamonds, in either white, yellow or rose gold color, in either stainless steel or gold.

Charriol is an independent, fully family-owned company, a rarity in this age where luxury houses are owned by conglomerates. The founder still actively runs it.

“This makes us special,” said Lecomte, who has been with Charriol for seven years. “We have to finance all our projects, which big groups don’t have to do. That’s a handicap. But at the same time, it also makes us very conscious of our every move. We never do anything unless we’re sure it will pay off because we don’t rely on investors. We’re a Swiss company with a lot of French people in the management. We’re very flexible. We’re allowed to do things that other brands aren’t allowed to.”  Cheche Moral