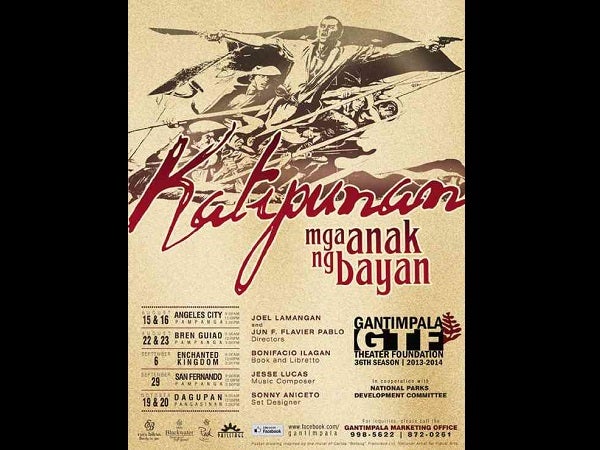 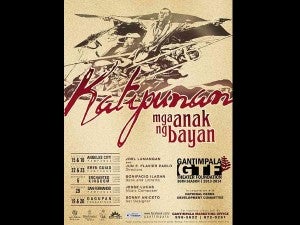 The musical theater production acquaints modern viewers with the short life and turbulent times of Bonifacio and his wife, Gregoria “Oryang” de Jesus. It seeks to illustrate the evolution of the mass-based revolutionary organization, the role of women in the struggle and the internal conflicts that weakened it.

Lamangan says, “Katipunan is my comeback to Gantimpala Theater. It was the first play I did when I joined Bulwagang Gantimpala in the ‘70s, when the late Tony Espejo was still establishing it at the CCP. This is full circle for me.”

“We’re making it as relevant and timely as it was back then, in terms of music and movement,” adds Lamangan. “This is all sung-through. The material is fast and tiring, yes, but we have a cast of young people who are doing it very well.”

The script is by by Bonifacio Ilagan, music by RJ Jimenez, lyrics by Jose Jeffrey Camañag, with set design by Sonny Aniceto. Production and stage manager is Cicey Alejo.

Metro Manila shows are being scheduled for November and December.

For tickets, block-buying and sponsorships, call the Gantimpala Marketing Office at 9985622 or 8720261. Visit www.facebook.com/gantimpala. Follow on twitter @gantimpala_tf.