This beer is not for guzzling down | Lifestyle.INQ ❮ ❯ 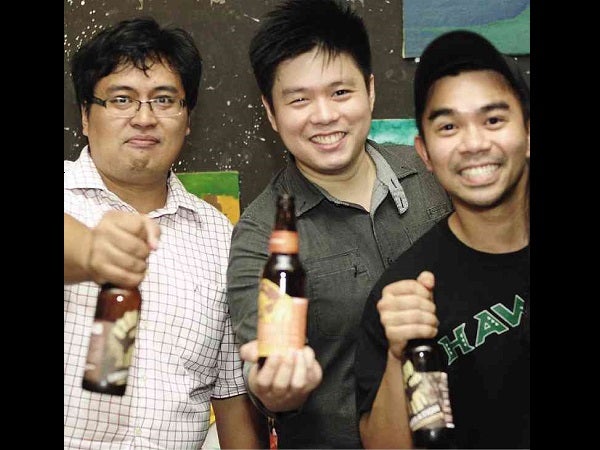 This beer is not for guzzling down

There’s beer that you just chug without thought or care. Then, there’s craft beer.

Craft beers are special brews produced in microbreweries. Quality and flavor are of utmost importance to makers of these beers; each concoction must be new and interesting.

Much like wine, a bottle of craft beer is meant to be drunk slowly, deliberately, to completely savor each sip.

In the Philippines, the craft-beer scene is still young, but highly enthusiastic. Most brewers are hobbyists, but thanks to the likes of Aldous Bernardo, Marvin Moreno and Chip Vega, the drinking public can now enjoy more of these special brews.

Moreno describes Summer Sessions as an “intro beer.” “It’s for those who haven’t been exposed to craft beer. It’s light, but flavorful.”

Adds Vega: “Between the two, we’re expecting Summer Sessions to appeal to ‘light’ drinkers who don’t want to be assaulted with flavors.”

Summer Sessions, he pointed out, goes well with an afternoon get-together with friends. Drinking it will “make one feel relaxed, like during the summer.”

Liberation Pale Ale is Craftpoint’s stronger-flavored beer, so named because it “liberates the drinker from his usual notion of the taste of good beer,” says Vega.

“Until now, when people talk about beer and strength, they think of alcohol content. That’s not always the case. It’s about the complexity of flavors.”

So, what is good beer?

“Good beer is easy to drink, but keeps you interested even if you’re on your third pint,” says Moreno.

The three guys thought of setting up Craftpoint in August last year. Vega met Bernardo and Moreno, who have been brewing their own beers for over two years, through a small community of craft-beer enthusiasts.

“I really wanted to put up my own bar,” says Moreno. “So I thought, what would make my bar different? Craft beer.”

From that idea, the three decided to concentrate on making the beer first.

Bernardo, who has a background in biology, is the group’s expert on yeast cultivation. They brew the beers in Moreno’s garage; it takes roughly two weeks to brew. Craftpoint can make around two to three cases a month.

Vega is in charge of sales and marketing.

They plan to look for more partner establishments in different parts of Metro Manila, such as Makati, Quezon City, Ortigas, Alabang.

Vega, who is from Los Baños, also wants to sell, together with their brews, locally made sausages and cheeses from his hometown.

“We want to educate people on how to properly enjoy beer,” says Moreno. “We want to give them the full experience.”