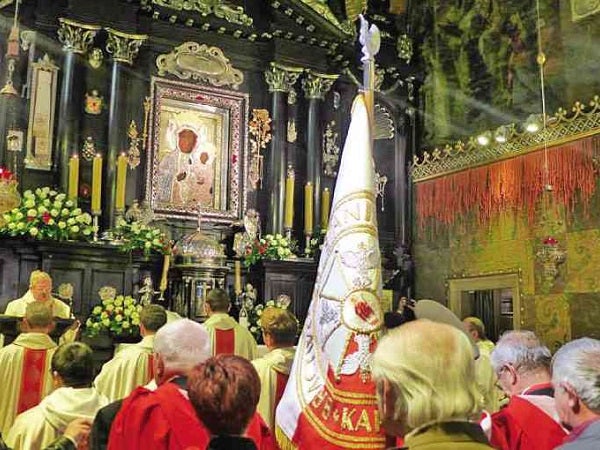 IT WAS Holy Trinity Sunday and Mother’s Day in Poland.

Three nuns and a Black Madonna in Czestochowa

Suddenly, all eyes are on Poland.

After a week of pulsating activity in Rio de Janeiro, Brazil, Pope Francis made the much-awaited announcement in Copacabana beach during the culminating Mass of World Youth Day 2013. The site of the next World Youth Day in 2016 is Krakow, Poland—the homeland of the soon-to-be-canonized Pope John Paul II.

Poland is known for its picturesque and historical sites—Krakow, Warsaw, Wadowice, even Auschwitz. There is a growing deluge of pilgrims wanting to know more about the Catholic Church’s newest saint, Karol Wotyla, and how he lived before he became the most traveled and much-loved Pope.

There is also a hunger to learn more about his devotions, including his fervent reverence to the Black Madonna of Czestochowa, Poland, in a place called Jasna Gora (“Bright Hill”) Monastery.

Over 90 percent of Poles are Catholic and hand in hand with their faith is their devotion to the Black Madonna—a religious and patriotic symbol for Poles. And Karol Wotyla was as Polish as you could get.

On a recent trip to Poland, I saw several signs of his devotion to the Black Madonna of Czestochowa. This special affinity even spurred him to donate to the monastery the bullet-holed sash he wore in 1981 when he was shot by an assailant. He believes he was saved from a would-be assassin’s bullet on May 13, through the intervention of the Black Madonna.

What really draws the interest of Filipino pilgrims to Czestochowa, apart from it being Pope John Paul II’s favorite pilgrim destination, is the marked presence of their kabayan. We were fortunate that our Journeys of Faith group decided to book us in a Franciscan convent just along the street that leads to the Jasna Gora monastery where we could find the sanctuary of the Black Madonna. It was here where we met the Luz-Vi-Min nuns of Czestochowa.

In a nondescript convent house in a quiet street in Czestochowa, three nuns from the Congregation of the Franciscan Sisters of the Sacred Heart do parochial and missionary work, help in schools and attend to the sick. They even house occasional pilgrims.

Fondly called Luz-Vi-Min by visiting pilgrims, Sr. Florinda Carnay  (from Antipolo, Rizal), Sr. Joyce Ereje (Negros Occidental), and Sr. Melita Canizares (General Santos) have been living and practicing their ministry in Poland for the last 10 years. This was after the former Mother General Giovanna Zippo of their congregation was invited by the Archbishop of Czestochowa Stanislao Nowak to open a new community.

The Franciscan nuns are thrilled whenever pilgrims visit Czestochowa. For homesick pilgrims, the nuns prepare Poland-ized Filipino cuisine like “Kiel-si-log” (Kielbasa, sinangag and itlog) and dishes that taste almost like adobo and other Filipino favorites. They even cater to uniquely Pinoy needs such as having the essential tabo in their bathrooms.

During the Masses we attended, it was heartwarming to sing Filipino hymns in their simple chapel.

Best of all, the nuns share interesting and little known trivia surrounding the devotion to the Black Madonna of Czestochowa. Sister Joyce insisted on bringing us to St. Barbara Church, one kilometer south of the Jasna Gora Monastery. Here she showed us the font from where waters, believed to be miraculous, spring.

The Black Madonna, painted by St. Luke the Evangelist, had been vandalized. Her face still bears four slash marks inflicted by a band of robbers who invaded the chapel and stole the picture.

After the picture was retrieved, it was washed in a spring. This body of water continues to bubble away right behind St. Barbara Church.

Today, pilgrims attribute several miracles to the spring water, especially maladies of vision that have been cured. We were fortunate to get bottles of this miraculous water.

Sister Florinda reveals that the Black Madonna of Czestochowa was crowned as “Queen and Protector of Poland” on April 1, 1656. In August, especially on the Feast of the Assumption, the Polish faithful descend to Czestochowa, mostly on foot, to venerate the revered painting of the Black Madonna.

“The practice has become so popular that it has been picked up by the faithful from other nations, Filipinos included. Why not, we, too, have our Black Madonna of Antipolo, and several thousands also make the pilgrimage on foot as well,” Sister Melita observes.

In August last year, it was estimated that more than 100,000 pilgrims visited the shrine. No wonder, Czestochowa is regarded as the “holiest place in Poland.”

The nuns are grateful for the opportunity to interact with the Filipino pilgrims that Journeys of Faith brings to their doorstep. Because they are able to visit the Philippines only every four years, these pilgrims have become their way of connecting to their roots.

Prominent Filipinos have enjoyed their warm hospitality. “We have had celebrities like Boots Anson Roa, the Herald of the Gospel brothers, several cardinals and bishops, even ambassadors in our convent. Each person brings a piece of the homeland to us and we are grateful for their company,” says Sister Melita.

Anson Roa thoroughly enjoyed her experience in Eastern Europe, especially the trip to Czestochowa and her stay with the Franciscan nuns. “They were like a breath of fresh air in our Eastern Europe tour. After Auschwitz and the Holocaust Museum, it was delightful to share lunch with copilgrims from Journeys of Faith, including my daughter Chiqui, in the company of joyful Filipino nuns, and their Filipino chaplain,” she recalls.

“Of course, adobo, rice, gulay and other Pinoy dishes and desserts on the table were a welcome sight! Chiqui and other more adventurous pilgrims even climbed the cherry trees in the scenic orchard at the back of the convent and feasted on the produce.”

The apostolate of the Luz-Vi-Min Franciscan nuns includes caring for the youth, including girls who have been morally wronged or those who find themselves in dangerous circumstances. Sometimes the nuns are transformed into part-time “caregivers” to kids who need some caring when their moms can’t do it. Sister Joyce introduced us to 2-year-old Timothy, a Polish left to their care while the mother goes to work.

Sister Joyce led us to the Jasna Gora Monastery where we found the Black Madonna in a small chapel, coroneted and bejeweled because it was the Feast of the Holy Trinity and Poland’s Mother’s Day.

We noticed the proliferation of rosaries, religious items, crutches and other offerings that the healed left on the arches and the walls. It was difficult not to be moved by these faith offerings.

This October, the Franciscan nuns will await eagerly the next batch of pilgrims joining Journeys of Faith that will visit the Black Madonna of Czestochowa.

The Luz-Vi-Min nuns share the global joy of the forthcoming canonization of Pope John Paul II. “The Poles are starting to organize their trip to Rome for the canonization. We hope that many Filipinos will join them,” says Sister Joyce.

Sister Florinda reminds Filipino pilgrims, “Keep your faith burning all the time, be constant in prayer to God and to the Virgin Mary, and trust in the Lord.”

With faith like this, small wonder that there is a Filipino in every corner of the world. As Anson-Roa says, “staying in the Franciscan convent with the Luz-Vi-Min sisters was like experiencing a little of the Philippines in huge, historic Poland.”

Journeys of Faith will have more pilgrimages to the Holy Land, Eastern Europe and Marian lands this October. It has a trip to the Holy Land, including one that features a Christmas concert with Isay Alvarez and Robert Seña in Bethlehem this December. Tel. No. 9290144, 9290155, 4260601 or e-mail [email protected]