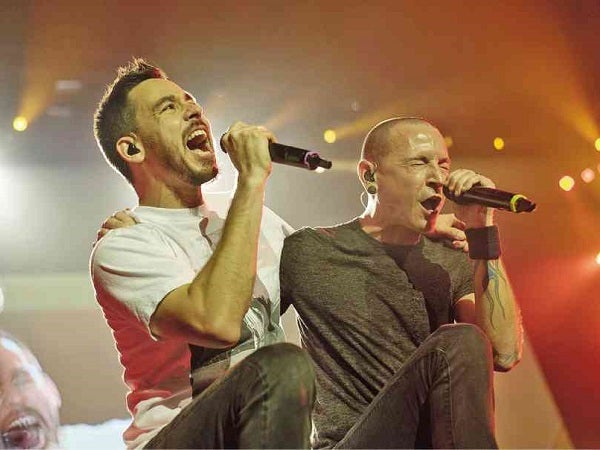 AFTER nine years, Linkin Park finally returns to rock Manila’s socks off. And on a Tuesday night, no less. PHOTO COURTESY OF SCALA EVENTS

A weeknight romp with Linkin Park

IN THE END…LINKIN PARK MATTERS   Linkin Park rocked the Arena of SM Mall of Asia on Aug. 13 as part of its “Living Things” world tour. After almost a decade since its first concert in the country, thousands of faithful fans gathered for the Grammy-winning American rock band. Video by Ryan Leagogo/INQUIRER.net

Who’s up for some serious headbanging on a Tuesday night? A lot of people, apparently.

Fresh from its weekend stint in Japan’s annual Summer Sonic Festival, Linkin Park stopped by Manila last Aug. 13 as part of its “Living Things” world tour. Even if the concert fell on a weeknight, thousands of fans showed up at the SM Mall of Asia Arena to watch the Grammy-winning American band rock this city hard for the second time after nearly a decade.

The fans were not disappointed.

The opening salvo, “A Place for My Head” and “Papercut” from 2000’s “Hybrid Theory,” was followed by a mix of charttoppers—from fan favorites “Somewhere I Belong” and “Breaking the Habit” from the 2003 sophomore album “Meteora” to the soaring “Waiting for the End” from 2010’s “A Thousand Suns.”

New singles “Burn It Down,” “Castle of Glass,” “Lost in the Echo” and “Lies Greed Misery” from “Living Things” held their own against the earlier hits, representing the glorious hybrid of screamo/rap-rock and sleek synth vibes that currently define Linkin Park’s sound.

Midset, the band gave the fans a welcome breather with a sweeping, three-song medley that became the emotional highlight of the night. A hush fell on the crowd as the arena went pitch-black, save for a couple of spotlights on Bennington and Shinoda.

The duo set the melancholy mood with the piano ballad “Leave Out all the Rest,” with Bourdon’s bass drum thumps slowly building the tempo for “Shadow of the Day,” then finally hitting the crescendo as the rest of the members came back for the anthemic “Iridescent.”

“Do you feel cold and lost in desperation? You build up hope, but failure’s all you’ve known / Remember all the sadness and frustration, and let it go, let it go,” the crowd sang earnestly with the band while holding up its lighted cell phones in a reverential manner. The arena looked like a canopy of twinkling stars.

The band then switched back to the more aggressive tracks, wrapping up with the indispensable “In the End” and the frenzied “Bleed It Out” from 2007’s “Minutes to Midnight.”

Before the encore, fans passed around printouts that read, “Come back soon.” Seeing them, the band members could only grin.

As if to make up for their brief stay, Shinoda and Bennington jumped into the VIP and Gold Standing areas to give the fans as much facetime.

The band obliged with two more “Meteora” tracks and capped an exhilarating set with the track that started it all. The familiar riffs to “One Step Closer” led to the concert’s cathartic climax, with fans old and new happily screaming and moshing along to the song.

Noticeably absent from the setlist were the Grammy winners “Crawling” and “The Catalyst,” and those who were hoping to hear “A Light That Never Comes,” the band’s new collab with Steve Aoki that had just made its onstage debut last Saturday, were largely disappointed.

But then it’s all the more reason for the band to come back.

It was a solid, seamless set, with just the right amount of rowdiness to get our blood flowing on a weeknight.

“I’m still pumped from our show last night in Manila!” Bennington tweeted the next afternoon.

It might have taken the band nine long years to come back, and one can imagine that the wait had been even more agonizing for fans who had missed the first concert.

But in the end, judging from the mosaic of giddy faces leaving the arena that night, Linkin Park’s second show was definitely worth every peso, and well worth the wait.