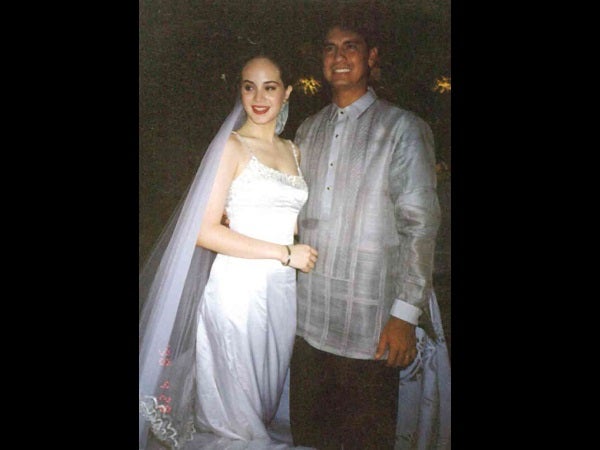 Who would have thought that fairytale-inspired wedding gowns are also fashioned on “truth, trust and mutual respect” between bride and designer?

The recent “Filipino Bridal Heritage” exhibit staged by Inquirer Lifestyle and LOOK magazine at Radisson Blu Cebu showed that while their aesthetics and approaches may differ, designers agree on one thing: the need to be honest to clients. And honesty includes saying no when a particular look or silhouette won’t work for the bride.

Sponsored by Champion Infinity, the exhibit on the foyer of the Santa Maria Ballroom was part of the Lifestyle/Samsung 2013 Face-Off Bridal show of Manila and Cebu designers last July 20.

Ortiz did Torres’ spaghetti-strap gown with a semi-scoop neckline and serpentine skirt. After the wedding of Richard Gomez and Lucy Torres seen on nationwide TV, many brides in the country copied the spaghetti-strap bridal sheath. It became an iconic design.

Ortiz makes it a point to ask the concerns of every bride who comes to him. Although he welcomes inputs from the bride, he evaluates these requests to make sure that they’re “feasible.”

“I’m always amenable to meeting halfway,” says Ortiz. “I find ways to infuse my own sensibilities. At the end of the day, a bridal gown is a compromised collaboration between designer and bride.”

But there were no such compromises when he did Torres’ gown almost 15 years ago. Except for choosing periwinkle as color motif for her entourage, she entrusted almost everything to Ortiz. He didn’t disappoint with his pure duchess satin number, with a semi-fit bodice embellished with glass beads and Swarovski crystals.

“I wanted the look of a modern fairytale princess who was about to marry her prince charming,” says Ortiz. “I wanted to create a simple and minimalist wedding gown that was elegant enough to flatter Lucy’s face and figure.”

For a touch of drama, he made Torres wear a tiara and a 10-meter-long Spanish veil. Thanks to the high-profile wedding, Ortiz believes that his creation set the trend then for classic and elegant wedding gowns.

Gayatin makes it a point to involve the bride in the entire process. After all, she says, it’s the bride’s big day, not the designer’s.

“Every bride I’ve worked with already has an idea of how she wants to look on her wedding day, so I try as much as possible to accommodate her wishes,” she says. “But I think it’s also my job to be honest and truthful for her to look her best. If a bride’s dream silhouettewon’t work for her figure, I will tell her so.”

For Christina Garcia, Gayatin did a strapless, mermaid-cut gown embellished with hand-made Dior roses and ostrich feathers. In duchess satin and silk organdy, it had a pleated bodice.

“My inspiration was the bride herself,” says Gayatin. “I wanted to enhance her wasp waist, so I cut the silhouette close to the body.”

Fellow Cebu designer Philip Rodriguez displayed the wedding gown he did for then model Fiona Evangelista. It has a closed-neck, long-sleeved top in vanilla-colored Chantilly lace and champagne-colored silk taffeta skirt. Its highlight is a side drape held by a bow in the front and back. He cinched the waist with a wrap sash held by a vintage brooch.

“At that time, it was the fashion to wear a strapless top,” says Rodriguez. “We wanted to create something away from that silhouette. We wanted something that was luxe, understated, feminine and timeless, yet evocative of Old World romance without looking dated.”

A big concern for Maggie Go was her gown’s fit. She chose among three wedding gowns, says her sister Rina Go. She went for the tried-and-tested expertise of Auggie Cordero.

“Maggie even ordered a Pronovias gown with juliette sleeves made of chiffon from New York, but she was so unhappy with the fit and construction,” Rina adds. “She ended up wearing an Auggie, and she was happy.”

Maggie, who was then into various sports, had a tiny waist and a trim, toned body. More than the gown’s design and embellishments, she was conscious about the fabric and the fit.

Cordero did a shell top with a scoop neckline and an A-line skirt with a bustle. Since he knew how particular the bride was about the material, he opted for finest quality duchess satin.

“Maggie went only twice for fittings and told Auggie, ‘you know what to do,’” recalls Rina.

Jun Escario got a different directive when he sat down with Joyce Tan, who wanted a “one-of-a-kind” bridal gown made of handcrafted materials.

“She didn’t want anything that could be easily copied or mass produced,” says Escario. “In short, she wanted individuality.”

He ended up using fully embroidered materials. To complement the bride’s lean physique, he opted for a classic serpentine silhouette. Its base was accentuated by web-like embroidery, while embroidered sparrows and chains of daisies adorned the top.

“It wasn’t a matter of totally giving in to her demands,” he says. “As an artist, I truly appreciate a bride who demonstrates her strong sense of individuality. In this case, all I had to do was streamline her requirements.”

It also helps if both parties know each other well. Rhett Eala has been making Isabel Plaza’s dresses since she was a teener. When she came to him, Eala knew more or less her preferences and what would work for her.

Since he envisioned Plaza as a modern bride, Eala steered her away from a romantic peg she wanted. Instead, they both decided on something more simple and timeless. After the first fitting, the bride gave the designer a free hand, and this inspired him “to surprise her” even more.

“I finally produced a strapless gazar with a mermaid silhouette and a very long train,” says Eala. “We cut out three kinds of French and Swiss lace and re-embroidered them all over the dress. To give the look more sparkle, we sprinkled the top of the lace with sequined appliqués.”

Apart from making a beautiful dress for the bride, a designer also has to make her feel good and beautiful on her big day. Drawing from his knowledge of fabrics and construction, Eala goes as far as teaching the bride how to walk and sit in a particular dress.

Santiago did a wedding gown fit for a bride “who exudes confidence” like shoe designer Rosanna Ocampo. It was made mainly of silk organza. Although it was a structured gown, he was able to make it look fluid by using lace and signature applique details, says Santiago. He and Ocampo hit it off early on.

“The inspiration was the pleating technique from my Aviary collection,” he says. “It’s fabric-after-fabric on top of the other. Rosanna saw the show, and told me ‘I want that kind of gown for my wedding.’”

Stylish Amina Aranaz opted for a strapless serpentine number made of duchess satin by Lloren. She wore the gown with a capelet in church, and with a bolero at the reception.

“The theme was Hollywood glamour,” says Lloren. “Amina, who, to this day, is still one of my most beautiful brides, was my inspiration. She wanted something very classic that would show off her nice figure. And since she had an aunt who’s a nun, she requested the cover-ups, especially for the church.”

As long as the bride’s requests are feasible and don’t veer away from Lloren’s aesthetics, the designer would be more than happy to do her dress.