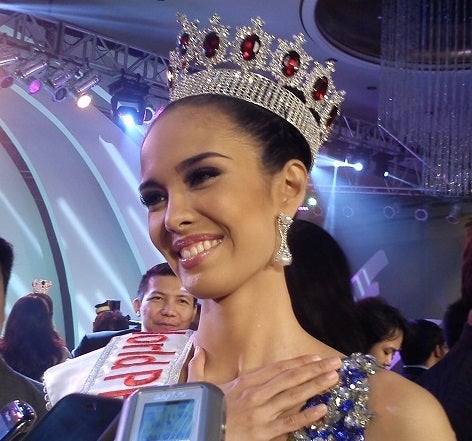 MANILA, Philippines—Heavy favorite Megan Lynne Young form Olongapo City bested 24 other aspirants in the 2013 Miss World Philippines pageant Sunday night at the Solaire Resort and Casino in Pasay City and took home the coveted title, P1 million worth of management contract from the pageant organizer, plus gifts and services from the contest’s sponsors.

Young, 23, is a local television personality who first gained prominence as an “avenger” in the GMA 7 reality talent search “Starstruck.” She later moved to ABS-CBN where she scored hosting gigs and other acting projects.

The 18-year-old Lubina, also the reigning Miss Bikini Philippines set to represent the country in the Miss Bikini International competition later this year, was also proclaimed Best in Swimwear and Miss Photogenic.

Zahra Bianca Saldua from Las Piñas City, a Muslim woman, was crowned Second Princess and got P100,000. She was the lone candidate to parade in a one-piece swimwear and did not take off her sarong in the swimwear competition. She was also proclaimed Miss Friendship and Miss Pantene.

Nueva Ecija’s Bianca Paz, who placed fourth in the pageant’s maiden edition in 2011, landed in the same spot this year and was proclaimed Third Princess. She took home P75,000, along with the distinction of being Miss Redoxfat and Best in Long Gown, the same award she received on her first shot at the title.

Rounding up the Top 5 is Omarie Linn Osuna, 20, from Olongapo City.

Young will try to bag for the Philippines its first victory in the 63rd Miss World pageant in Indonesia on Sept. 28.