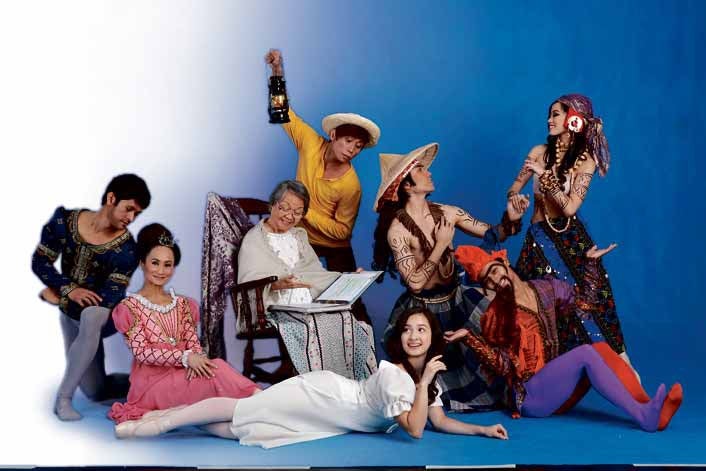 Lisa Macuja-Elizalde was in a fair at her children’s school when she came across a series of “Lola Basyang” books on sale. Leafing through the pages, she was enthralled by images of enchanted lands, bewitched sisters and mythical creatures. She thought how wonderful it would be if these stories could be told in dance.

Not long after, in 2008, “Tatlong Kuwento ni Lola Basyang,” staged by Ballet Manila (BM) had its world premiere. And it became an instant hit.

As word spread about the family-oriented show based on stories from the beloved storyteller of Philippine literature, additional performances had to be scheduled throughout that holiday season.

In succeeding years, the production has enjoyed multiple repeats, and has already been watched by an estimated 100,000 viewers.

From the start, Macuja-Elizalde knew that the Lola Basyang stories had enormous potential as ballet pieces.

“What we’ve long wanted to do was make all-original, all-Filipino shows,” says the BM artistic director. “Ballets for the whole family, but most especially for kids. I sort of wanted to get a Filipino all-year-round ‘Nutcracker’ kind of appeal. And I did!”

Osias Barroso, BM co-artistic director, says they knew they had a show that would have huge mass appeal. “The success of ‘Lola Basyang,’ in my opinion, wasn’t really a surprise because of the Filipino flavor. Our audience was able to easily relate to the three stories kasi Pinoy na Pinoy—the characters, the mood, the sets, the music.”

The new trilogy hews closely to what the BM team did with the first adaptation.

“We wanted the stories to have variety but always have action in it, since it’s still a dance production,” Macuja-Elizalde says. “So we had romance for the first story; action/adventure/fantasy for the second; and horror/comedy for the third.”

Veteran actress Luz Fernandez returns as the storyteller in the titular role; while Missy Macuja Elizalde is Ate Missy, the young girl who helps Lola Basyang thread the three stories.

Though BM is well-known for its adherence to classical ballet, Macuja-Elizalde believes the company should keep presenting new material.

“It’s important to always have something new to present to your audiences, to keep them interested, to keep the performances updated, and to keep the interest and passion of your dancers,” she says. “When you perform the classics, your ballet technique and artistry will develop and get stronger. But, you grow so much as a company when you tackle original works that are choreographed by your company, and the company expands its audience reach as well.”

She says the popularity of BM productions culled from Filipino reading fare, such as “Lola Basyang” and “Alamat: Si Sibol at si Gunaw” (based on Ed Maranan’s children’s book), ultimately helps win new followers of ballet.

“Repeat buyers are our best kind of clients,” says Macuja-Elizalde. “The audience that grows with you as a performer and as a company is the best kind. Some tell me that watching ballet in Star City has become their annual family Christmas treat, and that they tend to keep on lining up to watch the shows multiple times in the day. That is so heartwarming to hear.”

Barroso believes that in the “Lola Basyang” productions they have found the local counterpart of the Christmas classic “The Nutcracker.” “‘Lola Basyang’ is timeless. I truly believe that if the first trilogy or the second one is restaged a decade from now, it will still be a hit!”

Meanwhile, 2013 also marks the third and final year of Macuja-Elizalde’s “Swan Song” series in which she dances her last full-length productions of selected ballets. This year, the series concludes with “La Bayadere” and “The Nutcracker.”