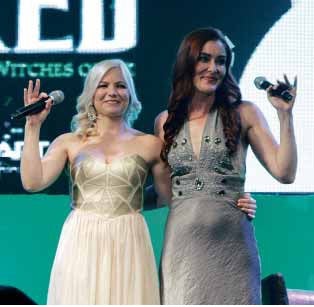 SUZIE Mathers and Jemma Rixwave at the audience after their duet. PHOTOS BY LESTER G. BABIERA

The witches of Oz are set to enchant Manila as the international touring production of the musical “Wicked” goes on its Philippine run starting Jan. 22 next year at the Cultural Center of the Philippines Main Theater.

“Wicked” tells the story of the emerald-skinned witch named Elphaba, who tries to rise above the norm and the superficial with the help of her newfound friend Glinda, who’s a conformist and her complete opposite.

Following its successful staging of “Phantom of the Opera” in Manila and due to insistent demand online, Lunchbox Theatrical Productions, with Concertus Manila, will bring “Wicked” to the Philippines.

Cundall says he is not scaling down the musical for the Philippine audience and will stage it the way it was done on Broadway and at West End.

“What I will give the [Philippine] audience is an amazing experience in the theater,” he says. “It’s not being reduced in any way. The audience will love it.”

With music and lyrics by Stephen Schwartz and book by Winnie Holzman, “Wicked” is based on the 1995 Gregory Maguire novel “Wicked: The Life and Times of the Wicked Witch of the West.”

Since opening on Broadway in 2003, it has reaped 50 major awards, including a Grammy and three Tony Awards.

Jemma Rix (who plays Elphaba) and Suzie Mathers (who portrays Glinda) were in town last week to promote the musical and performed some songs from the show during the press conference.

In an interview with Inquirer Lifestyle, Rix and Mathers said that although they had performed their roles over 100 times, they still prepared for it like it’s their first show.

For Rix, who has done over 800 Broadway shows, her most amazing part in the musical is getting to fly as she sings “Defying Gravity.”

“Flying is musically amazing,” Rix said. “But it’s different when you’re standing [and singing.] You can stand in your room and sing as much as you want, but when you get onstage and you add all the elements like smoke and flying, it becomes tricky. It took time.”

She said that her first time to play Elphaba was so overwhelming that she cried.

“Most of us [cast members] are fans of ‘Wicked,’ so for us to be actually doing it, it’s overwhelming and emotional because we get to live our dreams,” said Rix. “We feel really, really lucky.”

To prepare and to get her vocal cords ready, Mathers does a 45-minute physical warm-up before each show.

“I run light, because even though I have done 320 shows, the excitement of the audience gets me nervous,” Mathers said. “I enter the show in a bubble, so I’m there before the show and I like to get there at the last minute so that I don’t get nervous.”

Rix recalled that once, during the show, her dress got caught in the little trapdoor; as she walked offstage, she fell on the floor.

Mathers said her most embarrassing moment was when she landed off the stage. But she stood up as if nothing happened.

“I’ve fallen over a lot,” she said. “The worst that was really noticeable was when I tripped, fell and kinda rolled down the stage and landed almost in the orchestra pit.”

Cundall said “Wicked” would run for 3-4 weeks, depending on the demand.