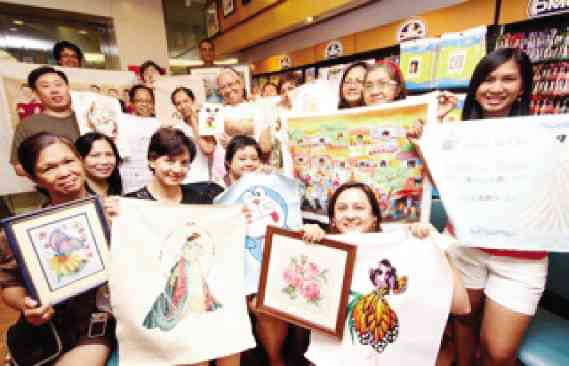 Cross-stitching is not just for old maids anymore

She spends hours hunched over a piece of cloth, her thin, bony hands sewing with precision through its tiny patterned holes. Her strained eyes, squinting and blinking, remain focused. And this she does—on and off, between work and play—for the next two to three years, pouring her heart over one single work of staggering detail.

Henrietta Refe, 44, a government employee, has been cross-stitching since 1986. Now referred to as a “stitchpert” by her peers, Refe is also doing commissioned works on the side. Right now she’s working on a 40” x 25” family portrait—a project that will take her about two years to finish—for just P20,000.

Another “stitchpert,” Rene Millare, 48, recreates the works of artist Manny Baldemor. His cross-stitch works of the artist’s “Good Harvest” (20” x 25”) and “Seasons of Hope” even bears Baldemor’s signature, boosting their market values. Cross-stitch works of Fernando Amorsolo’s paintings also get a certificate from the Amorsolo Foundation.

Welcome to the 21st century cross-stitch club, where enthusiasts not only assemble once a month to trade tricks and tips for the same passion, but also to promote an art once perceived to be an old maid’s hobby.

Called the Proud Pinoy Stitchers, the club was founded in 2011 when DMC Philippines asked Ayet Tipton, then a newbie to stitching, to formally organize the group.

“I started cross-stitching two years ago, after ‘Ondoy’ took away all my scrapbook projects. I needed a new hobby. Then I saw a display in the DMC store. I was intrigued, so I bought materials,” Tipton said.

Now with nearly 80 active members, the club meets once a month at the DMC store of SM Megamall. It’s a potluck merienda where members bring their projects, trade techniques and materials, and generally just have a good time.

In the club, members become friends with the unlikeliest people from different walks of life. There’s an eight-year-old learning how to stitch, a grandfather teaching techniques, or someone coping with a disease who finds stitching very therapeutic.

“We just bonded for the sheer love of the hobby. In my social circle, for example, nobody stitches. Nobody understands. Anybody who sees me says, ‘Pang-matandang dalaga yan,’ or ‘Stop doing that.’ Then I met these people. Finally, there are people I can share my passion with,” she said.

Its affiliation with DMC Philippines has also given the club opportunities to promote the craft further. They are able to join contests, suggest patterns and even tour their works around the country.

(They wrapped up a fundraiser to benefit children with terminal diseases at the Philippine General Hospital early this year.)

The club is busy working on projects for an upcoming contest by DMC Philippines. Top winners, to be announced in October, will win cash prizes, while the top 20 will get a chance to have their works exhibited in key cities in the country. It’s a big thing, said Tipton, since DMC Philippines holds contests only every other year.

Tet Elomina, 56, is among those excited about the contest. Diagnosed with lupus in 2008, Elomina turned to stitching in hopes that it might help bring back a sense of normalcy to her life. Losing her ability to write longhand, such that she could no longer pick up small objects such as pens, was just one of the effects of the disease.

Deciding to cross-stitch was a leap of faith. Since then, she’s recreated artworks by Baldemor and Amorsolo—and even had them signed, with the help of DMC Philippines.

The club also has a Facebook page. Membership is open to any Filipino who loves to stitch.