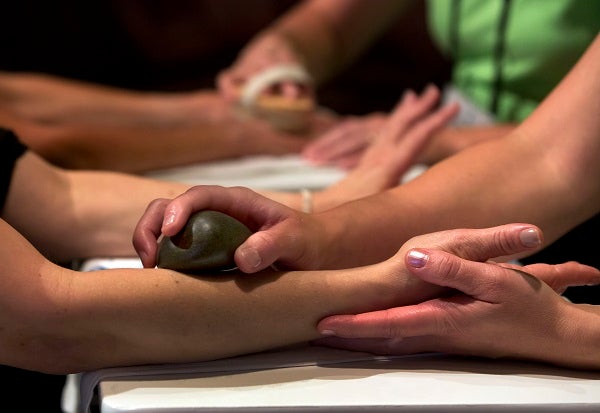 Farm to facial, guys welcome and other spa trends

NEW YORK — The farm-to-table movement has become farm to facial for some in the spa industry, with more locations offering fresh herbs and flowers from their own gardens for treatments.

And guys are being treated to pampering tweaked just for them as the number of men turning up at spas increases, according to a new survey by PricewaterhouseCoopers for the International Spa Association.

Overall, the industry has made gains in revenue, visits and locations, according to the survey, released at the spa group’s Aug. 16 trade show.

A look at what’s new and interesting in the spa industry:

Spas have long made use of local ingredients. Now, some are clipping and crushing Mother Nature’s booty right from the ground.

The Omni Mount Washington Resort in New Hampshire’s White Mountains allows guests to stroll the grounds and choose their own plants as part of the full body, 75-minute “Herbal Garden Treatment” for $175. “As you’re walking through the garden your therapist is talking about the herbs and what the benefits are so you can really customize it to your needs,” said Jaime MacKillop, spa supervisor at that Omni Hotels & Resorts location in Bretton Woods.

Aspira Spa at The Osthoff Resort in Elkhart Lake, Wis., has about two acres under cultivation, said the general manager, Lola Roeh. The latest treatment offering, for $390, is 150-minute “Trilogy of Linden” using honey and blossoms from the indigenous trees for facials, a body mask and a massage. “For centuries, linden has been used for calming and relaxation,” she said.

Travaasa Austin in Texas has a working farm from which to pluck spa ingredients.

The spa association has tracked male guests for about 10 years, said Lynne McNees, the group’s president. Their ranks had been steady, between 30 and 33 percent, but rose last year to 47 percent, according to the latest survey.

“A lot of that has to do with spas being much more open and catering to men, changing the services menu a little bit, changing the fragrance that they’re using of essential oils, changing what magazines are in the men’s relaxation areas,” McNees said. “Spas have become much more men-friendly.”

Travaasa Austin has a separate men’s spa treatment menu and a ruggedly decorated, wood-paneled treatment room exclusively for the guys. There’s a 50-minute “Gentleman’s Clarifying Facial” for $125 using sandalwood, lemon and bitter orange to exfoliate and boost the spirits. Travaasa’s “What Ales You” package for men, at two hours and $265, includes an energy boosting, 80-minute massage followed by peppermint foot care and an organic Texas ale — for drinking — at the end.

In Hawaii, Four Seasons Resort Maui at Wailea offers the “Alpha Male,” a 50-minute facial for $175 with green tea and green algae options.

Pleasing purple, in treatment ingredients and as a background color to calm the mind, remains hugely popular, but citrus and a hit of sweet are also turning up this season.

Massage Envy, a membership-based spa in about 900 locations, including high-end strip malls, offers “Sugar Foot Therapy” as a popular $10 add-on to massages. CG Funk, a company vice president, extolled the hydrating properties of sugar for hardworking feet. “We look at feet as probably the most abused and stressed-out part of the human body,” she said.

Foot scrubs with matching finishing butters include pink grapefruit, mango and tangerine, and lemon and sage.

“The lemons are cold so they absorb all of the bad energy that you have stuck in your body, so you can revitalize,” she said.

The full experience lasts 80 minutes and costs $198 in U.S. dollars and includes a tea pairing and use of rain sticks and finger cymbals to enhance rain forest relaxation.

Along with flora and fresh produce for spa treatments and culinary experiences at resorts are farm encounters with animal friends.

Keith Moon, the head cowboy and agriculture overseer at Travaasa Austin, and his staff teach chicken-keeping at the coop that supplies the resort’s restaurant with eggs.

There’s also a two-hour horse encounter free with a spa day pass. Moon and his cowboy team use horses to help guests learn more about themselves.

“You don’t ride the horse. It’s about how your interactions with the animal can tell you about your nonverbal communication and body language,” he said. “The horse picks up on your intentions. If you’re nervous and frustrated he’s going to mirror that.”

Sound highfalutin? Hop on one of the resort’s Fender Blenders instead. It’s a stationary bicycle that powers a juicer attached at the handlebars. Pick your own ingredients and have at it.

The International Spa Association’s survey of 1,000 destination and day spas in the U.S. showed a 4.7 percent increase in revenue last year at $14 billion.”