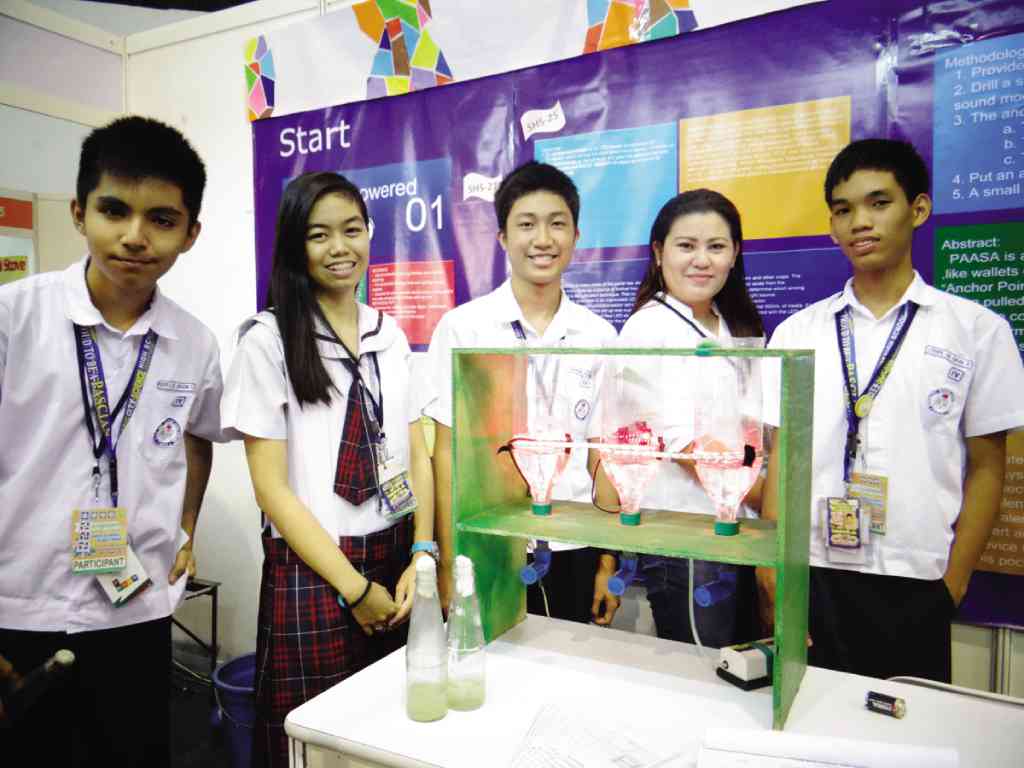 I’ve always dreamed of entering an inventor’s competition and proudly sharing my knowledge in science and technology.

That dream finally became reality when my group was invited to the Regional Invention Contest and Exhibits (RICE), a contest sponsored by the Department of Science and Technology (DOST). The theme of this bi-annual contest was “Inventions and Innovations for a Smarter Philippines.”

I was part of a five-member group that conducted extensive researches on the utilization of cinnamomum zeylanicum, cocamidopropyl betaine and sodium bicarbonate as potential alternatives in organic toothpaste.

This was our investigative project as juniors, which landed in the Top 10 entries of our batchmates.

My groupmates were quite surprised when our project made it to the Top 5. It meant that we had a chance to go to the RICE. We sent our manuscript to DOST and waited for the reply.

On July 30, my groupmates (or should I call them, the Awesome IP-Vengers), with our chemistry teacher,  Gloria-Cristobal Naypes, and four other investigative project groups, headed to

the Technological Institute of the Philippines (TIP) in Cubao, Quezon City.

We set up our exhibit in the most creative way—conceptualizing our booth to look organic and childlike, so people would find it cute and colorful, and thus be drawn to it.

The next day, we gathered at the TIP Anniversary Hall for the event’s opening. Clad in our high school uniforms, we watched a video about DOST-sponsored inventors and the growth of science and technology in the country.

After the video, Dr. Teresita Fortuna, regional director of DOST, gave the opening remarks. The RICE is DOST’s way of encouraging scientists in the country’s 16 regions to pursue their passion, she said. “If you have a passion for knowledge, then rest assured that DOST will support you.”

“We shouldn’t be too dependent on the technology of other countries,” he said. “We should promote Philippine ingenuity and innovations.”

His last words had a great impact: “The innovation process is hard, and sometimes you’re unsure if it will work. But with dedication, you will succeed.”

For three days, Andrea Ong, Lexine Martinez, Dana Sy, Patricia Rivera and I took turns manning our booth, which was visited by students from TIP and other schools, scientists and entrepreneurs. We responded to their challenging questions about our organic toothpaste called DiCINNfect.

The interaction improved my conversational Filipino and developed my confidence in entrepreneurship.

I went around the venue and discovered many inventions that could benefit society—for instance, a project of professor Ma. Patricia Azanza, Ph.D, and Ma. Elisa Obile about developing dried rice bran that would extend its shelf life to eight months, much longer than ordinary rice bran. This won second runner-up in the Likha Awards.

Ramon Magsaysay National High School created a sensor which can detect alcohol, butane, carbon monoxide, LPG and hydrogen. The alert would then be transmitted to your mobile phone so you’ll know if there’s a gas leakage at home. This project was third runner-up in the Sibol Awards.

The group from Mapua University did a research on a color sensor that contains an aqueous solution of sodium sulfide and glycerol that approximates lead concentration. It won first runner-up in the Likha Awards.

Students from Polytechnic University of the Philippines invented an automatic Meat Griller Analyzer which specializes in grilling rare, medium-well and well-done steaks.

The invention of Rolland Rallos from the Philippine Nuclear Research Institute—the Standalone, Sensor-based, Automated Fertigation System—aims to save water through the efficient “drip” method and to reduce electricity cost as well.

Rose Maria Marfori-Cirera, an inventor since childhood, created Amazing Mate which features versatile, lightweight and multifunctional pillow bags that could be opened and used as  nighttime safety protector.

My groupmate, Andrea, was initially anxious about joining the event. “I was worried about how our exhibit would turn out,” she said. “Thankfully, our individual efforts came together. At the end of the day, this experience has truly been a blessing.”

Lexine said, “DOST-RICE was a really great experience. It made me believe in [the value] of our research. A dentist even came to our booth, very much impressed by our product. It also made me realize [how innovations and inventions] can make a huge difference in society. I also improved my speaking skills, and it gave me more confidence in myself.”

Added Patricia: “Seeing all the inventions made by professionals and fellow students made me realize just how innovative and resourceful people can be. Also, I noticed a universal theme: making the world ‘greener’ and our surroundings safer. To me, it was more than just a competition. As a whole, the chance to represent our school and our product was a victory in itself.”