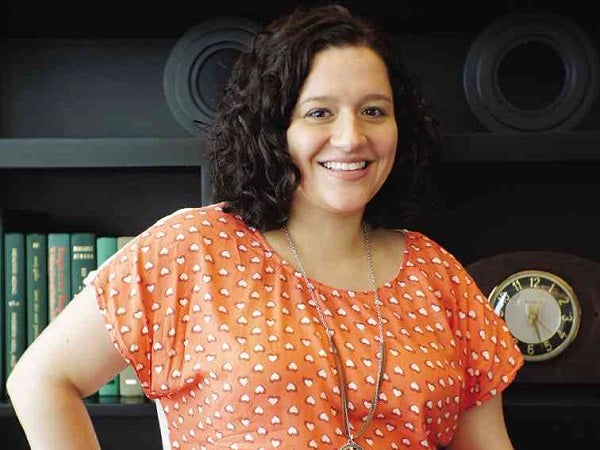 Kiera Cass’ “The Selection” is a series of books set in the near future.

In the first book, a group of girls from different caste systems are selected to participate in a contest where the handsome Prince gets to choose his princess. Yes, the dystopian trilogy seems to be similar to “The Bachelor,” although men would probably argue that this scenario is more utopian than dystopian.

Cass agrees that her trilogy is not dystopian, but for different reasons. “I don’t think that I write dystopian books; I just write books that happen to be set in the future. I set out to write love stories,” says Cass.

The South Carolina-born Cass was flown in by National Book Store to meet her fans in Manila and Cebu. The trip is a first, both for Cass and her fans. “It’s my first time anywhere. I’ve been to the Bahamas, that’s really it, I’ve never been anywhere. I don’t like flying either and it took serious flying to get here. But how could I not come? To be given the invitation, to have anybody care that much, yes I’ll come. It’s been really cool.”

Though she prefers to write love stories, her career was not inspired by love but by tragedy. “Writing was something I kind of stumbled into. My husband Callaway and I lived in Blacksburg, which is where Virginia Tech is. In 2007, a gunman opened fire on campus, killed 32 people and then himself. At the time Callaway was working on campus. My best friend lived on campus, we went to a campus-based church, all our friends were students. It was a bad day. I ended up losing people that I knew—no one really close—but even so it was traumatizing,” recounts Cass.

“It was too big … I just didn’t handle it well. Six months after, I saw a therapist and she was really helpful, but I still wasn’t myself. Around the time the anniversary happened, I told myself I couldn’t deal with these issues anymore; I think I’m going to give them to a character and see what she does, so I just gave all of my worries and confusion to a person on a page and I wrote and let her deal with things.

“It gave me a lot of clarity. It helped calm me down and I ended up never finishing it, because I woke up from a nap with the idea that became ‘The Siren,’ and then when I got into the habit of writing, lots of little voices came. There are notebooks at home with other girls, other stories waiting to be told. It was therapy, it was something for me. People ask if what fans say shape the books. It doesn’t, because I write my books for me, it’s a personal thing I do for myself,” she adds.

Writing stories saved Kiera. “I’m a spiritual person. I believe in God, I believe in grace, I believe that things can come to you. I think that writing saved me; I don’t know where I would have been, I was in such a dark hole. I couldn’t think, I couldn’t smile. I stopped laughing. You’ve been in my presence, I’m giddy, this is what I was and I stopped being that for a year. It just dragged me out of that,” says Cass.

These days, Kiera focuses on happy events, like being a homemaker and author. Though she says her special skills are limited to dancing and singing, her ability to juggle motherhood (she’s a mom to a 3-year-old son and baby daughter) and her writing is a skill in itself. “It was right out of college when Callaway proposed. I worked in a bookstore, did that part-time so I could stay home, keep house. I  worked as a substitute teacher. I worked at Ben and Jerry’s until I was published.

“The goal was always to stay at home and be a mommy. I’m really lucky that the job I do is flexible. It’s hard to have a career and be a mommy but it’s so great, it’s worth it. Being a homemaker is important to me; I take my role as wife seriously. I want Callaway to have a comforting, clean place to come home to. I want my children to feel this is a safe place. It’s difficult but it’s worth it. I’m fortunate. All the stress, they’re stress from great things, so I can’t complain,” says Cass.

When not juggling dishes, diapers and plot lines, Cass can be found tweeting or “fangirling” on Tumblr.  A lot of “Selection” readers post fan art and she uses Tumblr to collect these. That, and her One Direction obsession.

“Those are my obsessions, books and boy bands,” says Cass with a laugh. “I do like my One Direction, my Harry,” she adds, pointing to a Harry Styles bracelet on her wrist. “If you follow me on Twitter, there’s at least one tweet a day where I’m talking about them. It’s a problem. I’ve got the poster up my office, I’m gonna go see the movie, I’m really excited,” she enthuses.

So, would she join “The Selection” if Harry Styles were the prince? “Oh, yes! If I wasn’t married and was not like 10 years older than him, yes I would totally join,” she says.

“The Selection” and “The Elite” are available at National Book Store. Follow @nbsalert for updates.