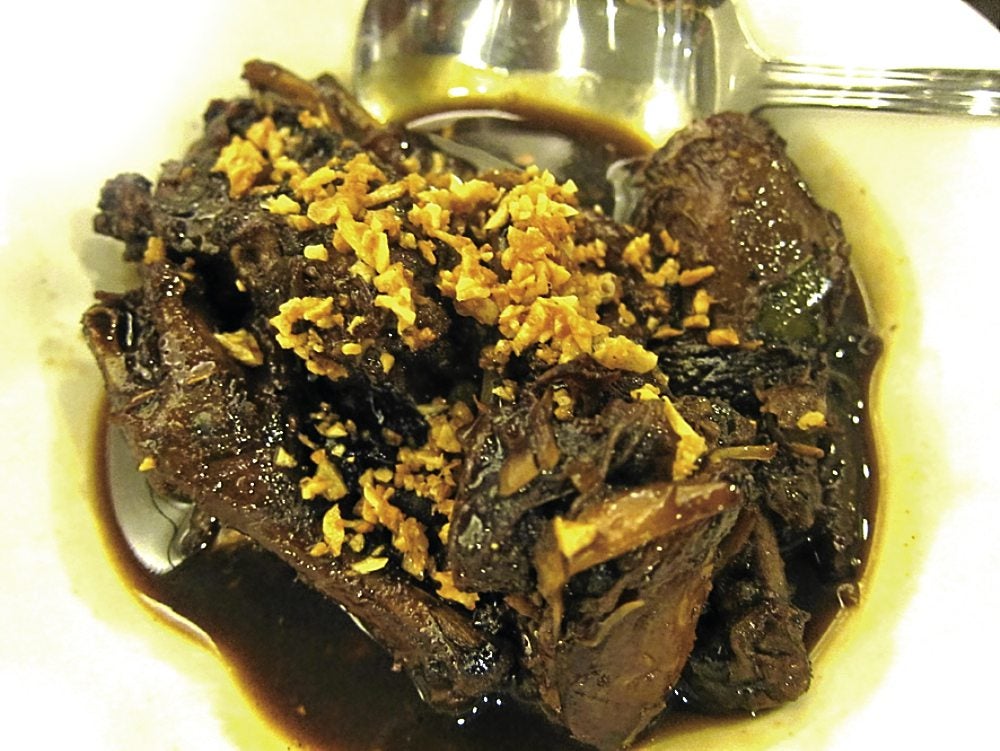 We fell in love with their pochero, once described in this column as something that could be “easily mistaken for kare-kare, because it uses melt-in-your-mouth beef instead of the usual chicken.” We got addicted to their chicharon bulaklak which comes with their signature suka (vinegar) with kamias. They became that homey little restaurant on Shaw Boulevard where you can go even in your slippers and shorts just to get your fix of Filipino home cooking. No sign warning “bawal ang nakasando dito” (no sandos allowed) out front, no fear of bumping into socialite friends as they just might come in pambahay (house) clothes themselves.

Now they have opened a second branch which has the same homey feel of the first, complete with chef/restaurateur Tanke Tankeko at most times greeting guests as they enter the door. The interiors continue to evoke the feel of a modest Filipino home, just as in the original restaurant. Colored panes on wood serve as “windows”; wood carvings break the monotony of the ceiling; drawings by Yuri Timg and Trisha Uy reflecting Filipino culture make the walls come alive, and a wooden bannister leads to a second floor that is ideal for dinner for groups of six to eight.

Usually when a restaurant expands, the second one pales in comparison to the first. But this version of 1521 is one that is bigger and better. And that includes the menu. Tanke, whose real name we continue to guess to this day – Purification? Conchita? Rosario? – has outdone herself once again.

The star of the new 1521: the Binayabasan na Baka. An ode to sinigang sa bayabas (guava sour stew), this soup is rich from the flavors of the beef and bone marrow that comes with it. And by bone marrow I don’t mean a slither of “utak” or marrow but a giant portion of it. Let me put it this way: If this utak were a person’s, it would be Einstein’s.* Then for more texture in the broth, Tanke purees the guava and mashes gabi to mix with the stock of beef and ligament. Whole guavas are also included in the bowl for those who truly desire a bayabas fix.

The show doesn’t end with the bayabas though. It can’t because the menu itself, as it is written, is full of comedy. Once a copywriter, you can see that Tanke had a blast wording the menu: Starters are Mga Bukang Bibig; sandwiches are “panini-desals”; rice uses a play on “come and get it” and reads “kanin—get it!”; fresh salads are “ensaladang pampaseksi.”

If you are not a bayabas fan and don’t mind blood, have the Oy! Oy! Batchoy! It has pork, liver and blood. It may sound a little gory but it is everything but. This batchoy comes alive in your mouth. If you care not for soup, have the catfish salad: a Pampangeño take on the Thai version. Called the Kamusta-Cat, this salad lies on a Thai-inspired sauce (complete with cilantro) but uses the classic Pampangeño pairing of mustasa (mustard) leaves and buro (fermented rice with shrimp). It is refreshing yet salty and crunchy all at the same time. Very Thai yet also quite Pinay. Not in the mood for soup or salad, just need a munch? Have the Bad Banana Chips. They’re banana chips but with a spicy powder on them – bad in a very good way!

The cooking here is very Filipino in the sense that flavors are rich. Don’t expect muted tones; with Tanke it’s all loud and banging. The Adobo Massacre has deep flavors caused not only by the soy sauce but by the liver and balun-balunan incorporated in the dish. In fact, the name was derived from the use of almost all parts of the “massacred” chicken – including the adidas (chicken feet). The signature fried chicken is first bathed adobo-style, then fried, then topped with garlic. Hence it is called the Bawang na Manok (a play on bawal na gamot or illegal drugs – meaning it’s so good you have to have it).

Other flavors are upstaged by the earlier mentioned loud ones but appealing nonetheless. The calamari, for example, is quite the staple in Filipino grilleries but here there is no need to dip it in mayo or aoili or toyo with calamansi. Like me (in my dreams), it is beautiful even without make-up – bwahahaha!!!!!! Seriously.

Bottomline: This is a place for easy breezy good times. Make sure you bring good company so the food isn’t wasted! Servings are presented family style – for sharing. Because good food, like good times, are best when shared. •

* For some reason, Filipinos call the marrow “utak” although the direct translation of “utak” is “brain.”