He has daughters named Anakin and Antigone, and a premium collection of horror toys | Inquirer Lifestyle ❮ ❯ 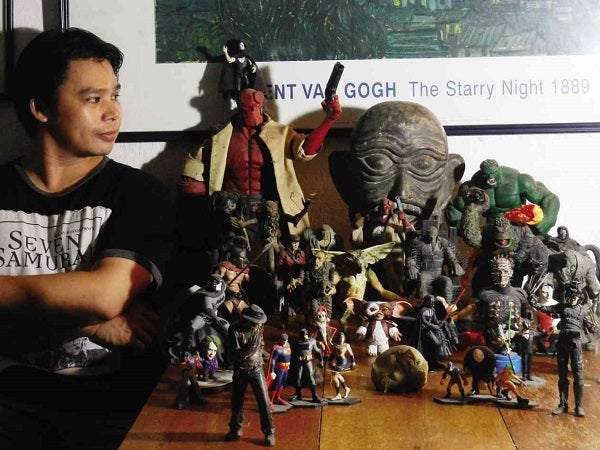 He has daughters named Anakin and Antigone, and a premium collection of horror toys

Growing up in a family of scientists, Ohm David was nicknamed the measurement unit of electrical resistance. “I was already in kindergarten when I realized I had another name, a ‘real’ name,” he says, laughing.

The nickname may have proven predictive for his profession as resident technical director (TD) of Dulaang Unibersidad ng Pilipinas. As the job designation suggests, he handles the non-design components of the lighting, sound and set requirements for productions.

Aside from hands-on skills, a technical director also needs organizational, administrative and planning skills. “Technical directors plan a production’s technical schedule: When sets are constructed, lights are hung and focused, when sound equipment is tested,” he says. “We work with directors, production managers and stage managers to determine the needs of a production. We help decide what materials to use, canvassing price of materials, etc.

“From rehearsals to actual shows, we have to ensure the safety of the stage, actors, the staff and the audience. The TD makes sure that everything will go as planned and the TD also troubleshoots problems.”

David’s work is slightly different from professional setups since he works for a school-based group: “Here at DUP, the TD works with the theater majors to construct sets, from carpentry to painting, and make props, from sourcing to fabricating. For costumes, we learn how to take measurements, repair and launder.”

And he is also a faculty member of the university’s Speech Communication and Theater Arts department (the department handling DUP). He handles all theater practicum classes and teaches stagecraft.

When teaching, he always makes sure to stress “the theater history component that is connected to each technical topic. It’s important to do historical research on the background of the play, to know what the play is about, when it was written, why it was written, for whom it was written, etc.”

The strange and macabre

Aside from his “scientific” environment while growing up, David was also exposed to comic books: “I grew up reading the comic books of my brother. I actually learned how to read because of comic books. Comics were my dictionaries when I was young.”

He was drawn to series such as Marvel’s “Strange Tales” and DC’s “House of Mystery”—comic books with tales and short stories reminiscent of the “Twilight Zone” TV series.

“This was also the time I was so into horror movies, classic and cult fan favorite horror movies,” he says. “I started reading Anne Rice novels and watching old horror movies like ‘Nosferatu.’ I don’t know why, but I like scary stuff. I love to challenge my imagination and also see the reaction of other people to the things I do and like.”

The strange, sci-fi, macabre milieu of these works inspired him to start collecting character figurines in high school, specifically those from the horror genre.

“I’m not choosy when it comes to materials or size. I don’t buy just any toy I see, even if I like the character. What’s important to me is craftsmanship. My collection is not that big pero piling pili. Sometimes it takes me years to save up and buy something, if I really like it,” he says.

His daughters Anakin and Antigone are unfazed by the collection and they play with the toys with him. “They’re both named from tragic figures in literature and the movies,” David says, smiling.

David had been acting since he was a child. “I usually got big roles onstage for school programs and productions. I joined speech contests and art competitions. In high school I acted in plays that I staged and designed,” he recalls. He’d also once designed the lights for a friend’s production using incandescent bulbs and flashlights.

His love for acting, reading, drawing, and imagining all fused together upon taking up Theater Arts at UP. He started out as an actor and eventually did props design, set design and lighting design, all of which molded him towards becoming a technical director.

“Having started out as an actor and a props head helps me in designing. It helps me figure out the geography of the set. I walk through it imagining myself as a character in the play,” he says.

From the mid to late 2000s, David was the resident technical director, set, and lighting designer for Altera Pars Theater Company in Athens, Greece. There he designed numerous plays including Eve Ensler’s “Necessary Targets,” which ran for an entire year in Athens and toured Central Greece.

‘The Duchess of Malfi’

Banaue Miclat, Liza Diño, and Adriana Agcaoili alternate as the titular duchess who marries below her status, inciting the anger of her brothers, which results in schemes and murder.

David enjoys working with different theater professionals. “Working with them opens my heart to vast images and new worlds, probabilities and impossibilities.”