Write a musical play, get a chance to win P1M | Lifestyle.INQ ❮ ❯ 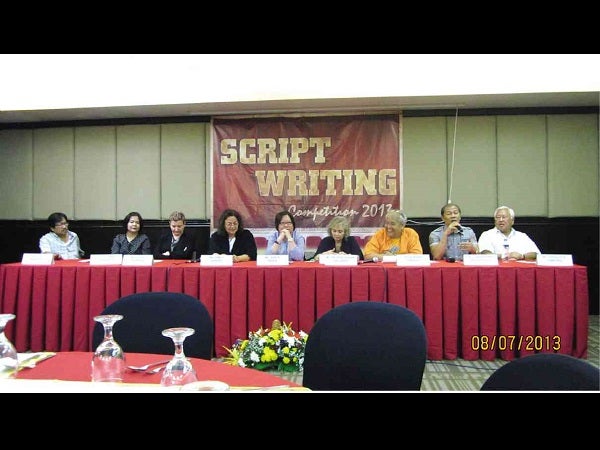 Write a musical play, get a chance to win P1M

Calling all Filipino playwrights here and abroad. Write a musical play and if it’s good or great, you stand a fighting chance to win one million Filipino bucks.

There’s a caveat, though. You have to write it in English.

In English?! Gasp. Hey dudes, haven’t you heard that language is tied up with a people’s soul? That means Tagalog (or Cebuano, Ilocano, etc,) if you’re Pinoy. Playwrighting in English went out with the late lamented National Artist Nick Joaquin, and so forth.

But, one by one, panelists in a press conference stood up to explain that what was needed was a musical play that could be exported abroad—to New York no doubt, London, Singapore, and wherever Churchill’s “all-conquering” language is spoken. And so the medium had to be English.

But we are getting ahead of our story.

The groundbreaking project, supported by the Ignacio B. Gimenez Foundation Inc. (tel 02-628-0000), was launched recently. The contest is ongoing and the deadline for submission of entries is noontime of March 31, 2014. There will be three winners, with the second placer receiving P500,000 and the third prize winner P300,000.

The libretto (script) should be for a musical play of about 90 minutes, suitable for staging, on any subject and must be written entirely in English.

The entry must have a maximum of 25 characters, with the CD recording of the songs incorporated into the story. And the playwright must be 18 or older, amateur or professional, published or unpublished. (Check out www.ignaciobgimenezfoundationinc.com.)

Something that can travel

Abrera observed that “the writing of music in English is hard to translate (into Tagalog). (We want) something that can travel. English can give it the best chance for a world audience. English can accommodate parts of our culture that need to be accommodated.”

Legaspi cited a “need to inform the world that Filipino talent is great, so English will have to do. That’s a challenge they (the writers) will have to take.”

She added: “The most difficult thing to find is the writer, the one who starts everything. So it’s a wonderful opportunity, and this is the very first time [for a competition like this].”

Topacio, who is from the citadel of Filipino that is the Philippine Educational Theater Association (Peta), noted that “When we go abroad it (the play) has to be in English. Foreigners say the lyrics in Filipino are beautiful but what do these mean?”

Martinez made a pitch for the Filipino musical, and opined that “Nakakasawa na ang Broadway musical (the Broadway musical is becoming tiresome).” That from one of the founders of Repertory Philippines.

Rodis said: “Judging will be very objective and will have high standards. Hopefully, in a year we will produce this masterpiece that everybody can enjoy. We have conquered all the creative platforms, so it’s time to get into this (playwrighting).”

“Sulat na! (Write!),” was Abrera’s exhortation. “You have eight months, almost the same time for making a baby!”