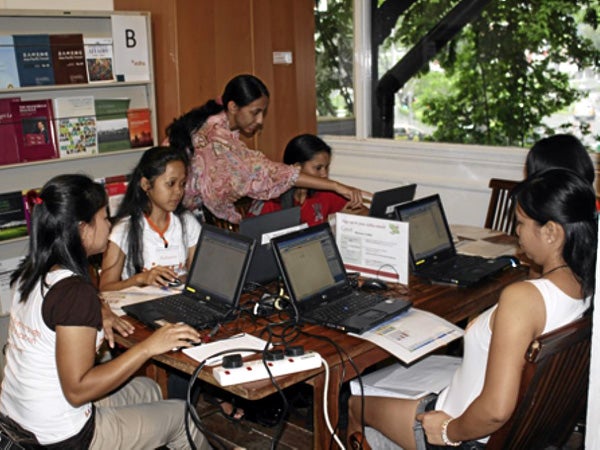 Becoming computer savvy with Excel with the help of volunteers

SINGAPORE – That Sunday, despite a downpour, I walked into Orchard Road with a bounce to my step. I had found Aidha, a non-government organization (NGO) that has enabled expats, volunteers and migrants to help fellow migrants reach for their dreams.  I was filled with hope for a better life for OFWs in this tiny nation where an estimated 80,000 domestic workers slave away their life.

The plight of the Filipino domestic helper abroad has haunted me since I was 17.  Heading home from my Junior year in Perth, Australia, I had an overnight stopover in Singapore. At the airport, a Filipina asked me, “Matagal ka na dito? Mabait ba yung employer mo (Have you been here long? Are your employers good to you)?”  It was about that time when the Flor Contemplacion case was foremost in the minds of Filipinos and Singaporeans alike.

When I returned to Singapore some four years ago, I again had to face the plethora of Filipino maids crowding this city state.  Despite deliberately avoiding Lucky Plaza on Sundays, I realized that their stories had managed to find me. The nanny of “Louis” and “Vuitton,” two adorable Maltese pups residing in my condominium, would lament how the two pets got better treatment than she did.

Later, while on a plane during an assignment in Hong Kong,  I found myself sitting next to Pin Pin, a domestic helper who forthwith pulled out photos of the Chinese girl she was caring for. But she also showed me photos of the house she was building in Zambales.

My heart aches for the hundreds of Filipinos sitting on the concrete on Sundays in the heart of Central in Hong Kong. Seeing this, my Polish neighbor once asked me, “What’s the word in Tagalog for this thing? There must be one because so many Filipinos do it.” He meant the act of sitting on the floor, sharing food and playing cards. “Picnic!” I answered him.

It’s sad how we often turn a blind eye to the plight of the Filipino domestic helper while we laud OFWs as modern day heroes. Thanks to their remittances, billions of dollars are pumped regularly into our economy.  Remittance companies, telecoms, airlines, and airfreight businesses are shored up by their patronage.  Indeed, they are the modern day heroes sacrificing much for a better life for their families.  Filled with selflessness, many of these women work hard and remit home almost all their pay, except for a few dollars for bus or MRT fare to get to church on Sundays.

But has anyone considered their needs?  At the end of their stint abroad, are these domestic helpers able to secure a better life for themselves?

I found the group through my friend Isabel, who had been prodding me to help out. Buried in my own drama and concerns, I had always turned a deaf ear to her pleas until a few weeks ago when I caught her on Yahoo Messenger. Isabel, a writer working in an ad agency, has been volunteering with Aidha, offering mentoring classes on Sundays.

When I asked what she was doing that afternoon we were chatting, she replied, “Reading a handwritten [business] plan from a maid who has given jobs to 15 men in her hometown.”

That’s astounding! This domestic helper got her return on investment in one year, Isabel told me.  The maid not only managed to improve her life and that of her family, but has also provided income for her townmates.

Intrigued by the group, I headed to Aidha’s office just off Orchard Road. Despite the heavy downpour, the black and white colonial house shone bright with brilliant smiles. The rooms were set up for classes, with domestic helpers provided a computer each and expats teaching them the basics of Excel.  In a smaller room, the Financial Compass club was having a session, with students huddled around their mentor. One by one, they presented their bank statement, part of an exercise to get them into the habit of saving money in the bank.

Veronica Gamez warmly welcomed me and explained what Aidha is all about: a micro-business school teaching financial education and providing management and entrepreneurship training to the hopeful poor.

In the first module, students learn computer skills, leadership, and financial skills. The second module teaches them practical business and entrepreneurship skills, including creating a business plan.  Veronica, a former Finance executive at Credit Suisse, explained that each class runs for 1½ hours, starting at 10 a.m., 1:45 p.m. and 3:30 p.m.

Veronica explained that because they shell out money, the students take their education at Aidha seriously.  Since they’ve invested good money in it, they pour more effort and attention into the program.

Learning money management is perhaps one of the most practical skills domestic helpers learn from Aidha, said Veronica. She has observed that many students have a common misconception about savings. They often think that their remittances home can already be considered as savings.  But Aidha teaches these women to save on top of the money they send to their families.  In nine months, most students are able to successfully save SGD1,000 (P35,000) by setting aside  an average of SGD240 a month, which is  more than 50 percent of their monthly salary.

After hearing one too many stories of Filipinas working abroad only to find out later that their husbands or partners back in the Philippines had drunk and gambled away their hard-earned remittances, I felt heartened that under this new model, the women are taught to save and invest in a better future for themselves.

During that Aidha session, I noticed how the women were nicely dressed and carried themselves with a professional demeanor. This may have been a result of their public speaking class.  Though many of these women do not expect to be giving public speeches, they’ve been trained to communicate clearly and carry themselves well.

Previously, many of the students were too shy or frightened to get up and speak publicly.

My friend Isabel, who teaches the Leadership Skills class where public speaking is included, said she is touched by the effort that the women put into their homework.  They have to overcome their fear of public speaking and prepare a speech.   Isabel also teaches them to present themselves nicely. One student even stitched her own dress for her turn at the microphone. Emphasizing the importance of good communication skills, Isabel explained to them that they often get only a few minutes in a day to talk to their foreign bosses. If they can express themselves better, articulate their needs, and even negotiate, they are assured of better work conditions in their current jobs in Singapore.

While the students stayed focused on their classes, all around me were Aidha volunteers. These are graduates from the program who religiously return every Sunday to help in running the program. Their presence also provides students with great role models and inspiring success stories.

Marilyn Magbuo is one such volunteer who only moved to Singapore in 2009, after a four-year stint in Dubai.  Her Dutch employer encouraged her to study at Aidha. She started in January 2010 and graduated last June.  Thanks to Aidha, she has managed to open an Internet café in Dalig town, close to Balayan, Batangas.  She is also paying for a 200-sqm property in Batangas.  Her employers, she said, are supporting her education at Aidha now. Someday, she added, she hopes to open a bakery back in her hometown in Batangas.

Veronica then introduced me to 37-year-old Janelyn Pascua, who graduated in 2009. “You do have a farm, right? I’ve seen your photos on Facebook,” Veronica said matter-of-factly.  This prompted Janelyn to tell me proudly about her one-hectare farm in Cabugao, a town in Ilocos Sur that is planted with mango and mahogany trees, rice, corn and peanuts. It provides extra income for Janelyn, as well as those who work for her.

While 80 percent of the students at Aidha are Filipinos, there are also students from Indonesia, Sri Lanka, Myanmar, India and China.  Equally diverse is the full time team of expats at this NGO.  They come from the US, Germany, Netherlands, the Philippines, and Mexico.  The mentors are volunteers who generously share a portion of their Sundays with Aidha.  Instead of staying in bed or having a long lazy brunch, the volunteers offer their day-off towards the development of these women. It is empowering to see migrants helping fellow migrants achieve a better life.

Aidha, Veronica pointed out, means the “path we follow to reach our dreams.” Aidha’s dream is to grow other similar support communities for migrants around the world.  A Mexican, Veronica feels a strong desire to help the 12 million Mexicans who have migrated to the US.

In the past, I usually avoided Orchard Road  like the plague on Sundays, mainly because of the crowd.  But today, it’s different.  I’ve found hope. I’ve found Aidha. •

For more golden delicious moments in food and travel, follow the author  on [email protected], read Maida’s blog, www.themaidastouch.blogspot.com or email her at [email protected]  Maida Pineda is also the author of “Six Degrees of Expatriation: Uncovering Lives of Expats in Singapore” and “Do’s and Don’ts in the Philippines.”  Maida has a Master of Arts in Gastronomy from Le Cordon Bleu and the University of Adelaide.