The way we were | Inquirer Lifestyle ❮ ❯ 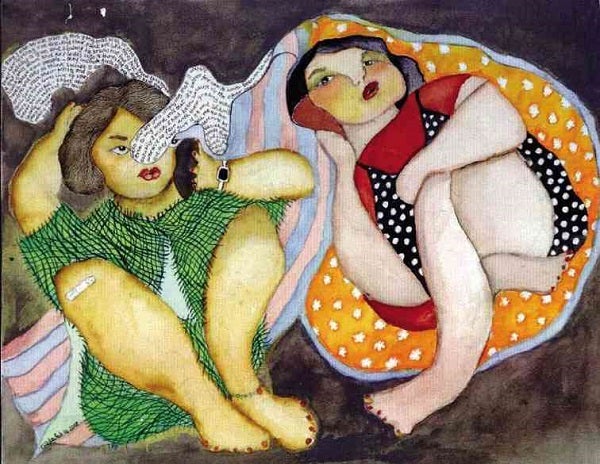 “THE WAY They Are” ART BY GCF

The way we were

While I was foraging on the highest of my bookshelves, a Jurassic yearbook fell on my lap. In it we were Fourth Grade, all holding diplomas. There were several graduations then—primary or Fourth Grade, elementary or Sixth Grade, and Fourth Year High School.

St. Theresa’s College was a convent school for girls run by Belgian nuns, though the primary grades were coed. We had only about six or so boys per class, nurtured through kindergarten.

As far as we original alumnae were concerned, the only real Santa Teresa was the one located at 202 San Marcelino St., Malate. Not the low, democratic “branch” on D. Tuazon, Quezon City. STC used to be an ornate white structure that looked like an elegant wedding cake. The top floor was surrounded all over by ornate white precast railings. They had cutouts, like fat, exaggerated cross stitches.

The Adamson University to whom the wedding cake was sold used to be a small school across us, next to San Marcelino Church. Nothing remains as it was. I had not passed by that street for a long, long time. If you want to break your heart, visit a neighborhood you once knew as a child. I eagerly looked for our familiar old building which, for a while, remained intact and just had “Adamson” tacked on it. Gone now were the signature white balustrades. It was a new, modern facade. All that remained of the old structure was one miserable row of cross stitches, embedded gracelessly under the Adamson sign. They looked like false teeth.

Of the faces I saw in our yearbook picture of Grade IV, I could identify most of the girls, and Renato Ira, who lives down our street, identified most of the boys. Here they are:

There’s something sentimental about old age. All of those classmates must now be more or less my age—82 to 85. They are lola and lolo, or crusty old bachelors and spinsters, widows and widowers, or nuns and priests. They may be healthy or infirm, and some of them may be dead.

St. Theresa’s, San Marcelino, had a big playground surrounded on three sides by classrooms. The corridors were polished cement on which you could skate to your heart’s content. Each of these three sides had two steps down to the playground. Kids were always sitting on those steps playing jackstones or Pick-up-Sticks or drawing.

On the playground you could play piko, kick-da-can (or baseball if it was P.E.). In the middle was a Maypole that had hanging ropes with loops at the ends that you could hang on to, run and lift up. On the other part was a set of swings.

There were two big acacia trees near the “bridge.” They were encircled by cement seats. Yayas often sat there since the trees were near the slides and the seesaws where the kindergartners played and headed for the drinking fountains.

“Under the bridge” was shady and ideal for playing patintero before the 2 o’clock bell. An open-air prohibited area on the second floor led to the high school classrooms and the clausura or sleeping quarters of the nuns. If you were daring, you could clamber up the partition and peep into the clausura to see if the madres were really kalbo (something that always sent us girls into paroxysms of laughter).

STC had two candy stores. The small one carried sweets costing less than 5 centavos, such as Oracca hard candies, Butterballs, Señorita Lemon Drops, caramel squares, Kisses, coconut candies, titina, dikyam and a cheap candy with a bonus carcomania that you could wet to transfer its design on your arm.

The recess bell—five or six enthusiastic clangs—came from a big bronze bell hanging from a tree. A reliable student bell ringer pulled the rope attached to its tongue. Three clangs heralded the beginning of classes, and lining up. “One” meant silence. The next “one” meant “pass” or “enter classrooms.”  That bell ruled us all.

How could you not admire the Belgian nuns? Almost just teenagers, they came from a cold, cold country to found a school in a hot, hot land. Their wimples were tight, their black veils with starched corners looked like Batman capes.

Underneath their white habits we discovered two more layers of thick black underwear. On their breasts hung a crucifix. A wooden rosary, two feet long, dangled from their waists. They had ruddy Caucasian faces. They smiled, they itched, they prayed with outstretched arms, they got homesick, they died.

But they knew their onions and faced every class prepared. They flawlessly transmitted the English they had just learned (with some quirks in pronunciation) and we, the Theresians, knew grammar well. They reared us like fine European misses. They taught us the French curtsy to the Belgian Queen. Our books had lots of fir trees and squirrels and snow. I had no idea I was Filipino.

Every month we had a day of reckoning, the Proclamation of Grades in the Assembly Hall. We formed a semicircle under a towering plaster statue of St. Theresa of Avila where our grades were “proclaimed” for all to hear. It was heaven for those with good grades, while those who did not melted in their boots.

I don’t know if anybody ever had such a memorable education since. And a more child-friendly playground to cherish than ours.