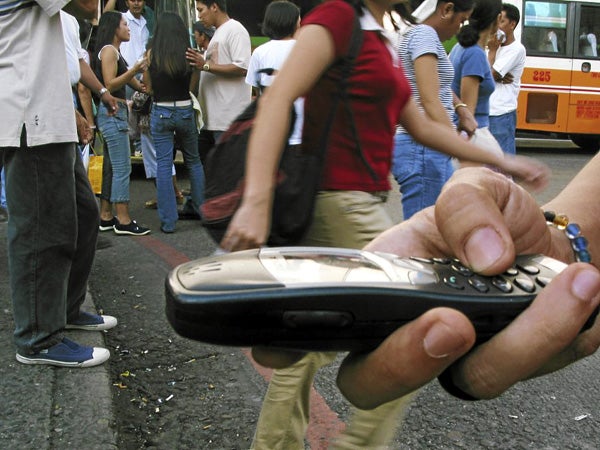 Inday and her cellphone

There was a time when ownership of a cellphone by any member of the family disqualified a student from getting a University of the Philippines scholarship or subsidy.  Cellphones were just too expensive.

Then a market emerged for used and GSM (galing sa magnanakaw) phones, making mobile phones more accessible. Of course their quality was iffy at best, and the phones often broke down within a few weeks after purchase.  The same thing happened with “Chinaphones,” cheap but low quality cellphones from Chinese manufacturers. True, brand name phones like Nokia and Samsung are also made in China, but their quality control is  more consistent, thanks to the manufacturers’  multinational partners.

Now that big name manufacturers have also brought down their prices, with phones as cheap as P1,000 and with a stronger guarantee of durability, the market is now wide open for low-income Filipinos, including domestic helpers – maids, houseboys, drivers. This has transformed the lives of these workers… as well as their employers.

We Filipinos are generally a congenial lot, but the domestic helpers’ need for social networks is usually quite strong since they often come from rural settings where people interact all day, in the streets and in each other’s homes.

I was reminded of this congeniality just recently when looking for a household helper for my parents.  A young girl from a remote barangay in Samar applied –and lasted a day.  She said she was very happy with the rather high salary offered, the working conditions, and her prospective employers.  But there was one big drawback: “masyadong tahimik,” the house was too quiet.

Given this need for social contact contrasted with their being sequestered in homes, it’s not surprising that domestic helpers will find ways to remain in touch with the outside world.  Every chance they get they’re out in the street talking with other helpers (and often, spilling family secrets).  The occasional day off is sacred as it gives them a chance to get together with the barkada or with relatives, and these reunions can be quite raucous.

Then of course there are the “special needs”:  single ones needing a special someone, and the married ones, often with their spouses hundreds of miles away, still needing special companions.

We often hear about household helpers being “wild” and “flirtatious” (I’m using the English euphemisms for stronger Filipino words), but how would we behave if we were in their shoes, being away from home and family for months on end, sometimes even years?

Enter the cellphone and you have many new worlds being opened up.  To meet new people, domestic helpers used to have to wait till their day off and hope that they’ll meet someone through friends.  These days, cellphones allow friends to become go-betweens for new friends, or more serious relationships.

Maintaining contact is so much easier now.  It used to be that household helpers had to wait for “Sir” or “Ma’am” to be out of the house so they could make phone calls. With their own phones, they can now call friends or family in their home province at all times.

Dr. Sol Dalisay, a colleague in the anthropology department at UP Diliman, has been working on a project that looks at this aspect of social networking among domestic helpers. She found them quite knowledgeable about the ins and outs of cellphone use: from plugging into cheap phone plans (e.g. Sun to Sun, “unli”  or unlimited calls and texts) to constantly changing SIM cards to avail themselves of the free loads that come with each new card, and so on.

What’s happened is that even without access to the Internet’s Facebook and other social media sites, domestic helpers have been able to create fairly vast networks of friends, who help them make new friends.  There are even “clans” now involving several dozen people who meet up through random dialing over cellphones and who will arrange for their “eyeball meetings” or face-to-face encounters.

But cellphones do more than just facilitate communication. They’re also repositories for memories, with photographs and “love texts” stored away, together with phone numbers of numerous contacts.  Even cheaper phones now have cameras and MP3 players. Meanwhile, some of the more sophisticated domestic workers have learned to use 3G phones to do Facebook, so yes, they’ve entered the computer age too.

The cellphone world replicates the real world. The women get to ask their boyfriends to pass them load, but it’s rarer for men to ask their girlfriends to do the same. Sadly, the cellphones have also amplified the deception of the real world.  Some domestic workers admit to having more than one boyfriend, and may go to the extent of keeping two SIM cards.  But I wouldn’t be surprised to know that they learned the technique from the men, since drivers are notorious for doing this.

Dr. Dalisay also found that upper-class employers tend to be stricter with the use of cellphones, sometimes even forbidding their use during working hours.

Middle-class employers are more practical, sometimes even buying a cellphone for their helpers, which then allow them to speak up about the use of the phones, or even give advice about the risks from meeting clans, or having cellphone suitors.

There was a time when employers would complain about household helpers tying up the phone lines whenever “Sir” and “Ma’am” were out of the house.

These days, the problem is you can’t find Inday because she’s in the toilet or some corner of the garden, happily chattering away with the world on her cellphone.