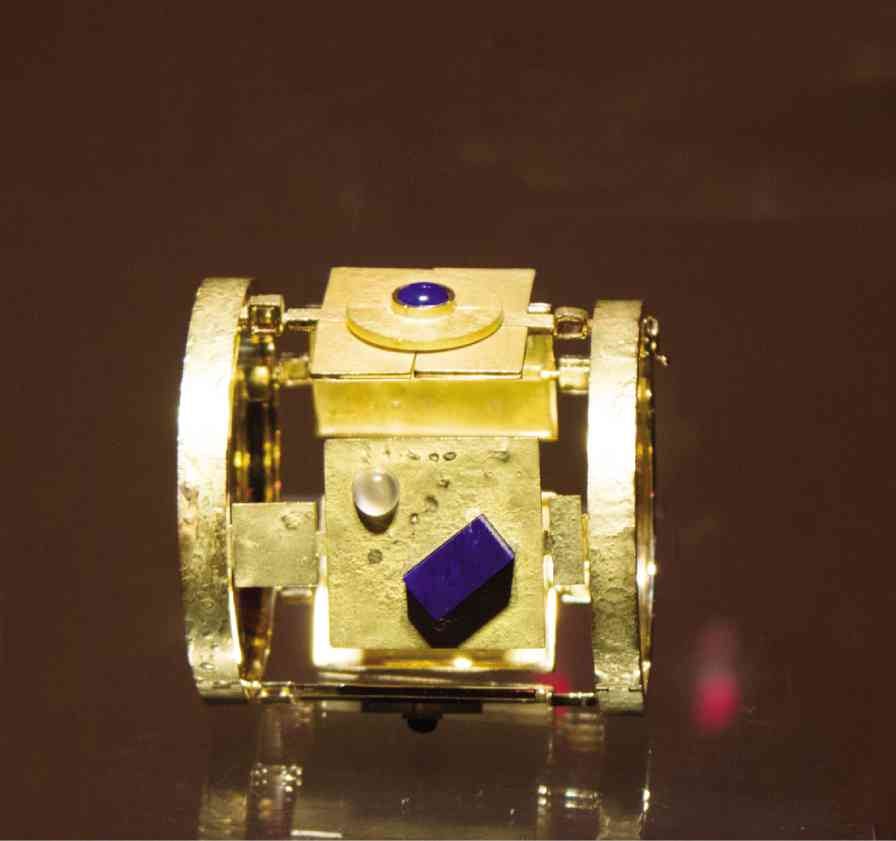 The recent opening of the “ArtWearAble” exhibit at Yuchengco Museum proved that man was no longer “just a subject but a canvas for contemporary artists.”

“With art jewelry, one can freely explore the seamless unity of functionality and embellishment, of storytelling and shock appeal, of revival and retrieval, and of design and aesthetics,” said Castrillo, who started his brilliant design career as a jewelry designer of Estrellas del Norte.

As in his glass sculptures, Orlina shows equal facility in designing jewelry, many of them inspired by famous personalities such as his “Diana” neckpiece, containing a Swarovski pink crystal set in silver with blue sapphire and leather-cord chain; and “Maria y Orosa” ring, made from hand-cut azure-blue crystal set in silver with pink sapphire, dark-blue sapphire, yellow sapphire, green tsavorite, garnet and purple sapphire.

Pilapil’s work is inspired by nature, as can be seen in her various jewelry designs with botanical shapes. She said her Ikebana (Japanese art of flower arrangement) lessons with her mother-in-law inspired her to seek design concepts and ideas in plants.

“I consider jewelry sculpture in miniature,” she said. “And I like the idea of giving permanence to the beauty that roots, leaves, flowers, and even vegetables possess.”

Brumann’s works are characterized by stark minimalism. This gives his designs a classical appeal.

“Jewelry is not a fashion fad,” he said. “Pieces should be created to last a lifetime, if possible. These collaborations keep alive what I think is the most important element in the making of jewelry—the quest for new ideas.”

Aside from her jewelry designs, Syjuco also takes pride in her custom-made handbags which consist of intricate gears and cogwheels for their locking mechanism.

Pilapil sought the physical environment as inspiration in her ornaments. Her works are inspired by the movements of water, forces of nature, and even the origin of the cosmos.

One of her works, “Ocean Bubble,” is a pair of 18-karat gold earrings made distinct by its spiral shape, akin to a whirlpool.

New’s designs can be described as an amalgam of his experiences in film, photography, fashion and theater. He mounts installations of human figures wearing his designs to give his jewelry a more “situational” perspective. He generally describes his style as “constantly in flux.”

“My works are a continuing process, and three years from now they would be totally different,” said New. “I am not of the persuasion that art remains static, but rather will change in the various phases of my life.”

The works of Luz are characterized by their simple geometric figures and the utilization of a blue-and-gold color scheme. The minimalism is an allusion to the modernist values of order, elegance and competence.

Castrillo’s inspiration was the human body itself, as he continually finds new and creative ways to wear jewelry. Since he considers his jewelry as sculptures, he coins his works as “body sculptures.”

“I explore the expression of a serious sculptural form in body adornment,” said Castrillo. “When jewelry is expressed in a serious manner, when it does not conform to any fashion trends, my sculptured art jewelry goes beyond fashion. They are miniatures of my monuments and vice versa.”

Castrillo added that designing jewelry should be a form of expression.

“Artwearable will be on display at Yuchengco Museum, RCBC Plaza, Makati, until Sept. 7.