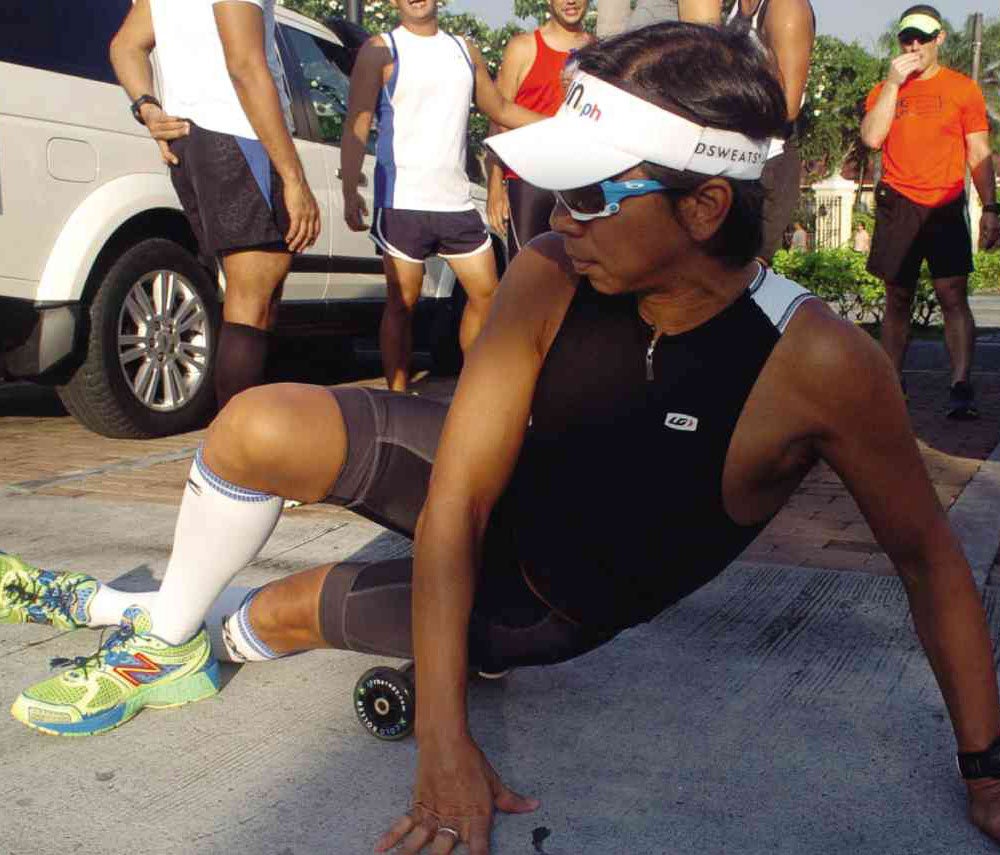 Kim Atienza is munching on roast beef sandwich with vegetable salad while talking about his healthy lifestyle.

“Maganda cut nito, lean beef,” he says. “But you know what’s leaner than beef? Pork. The white meat of the pork ha. Just don’t eat the fat and the skin.”

We are at Edsa Shangri-La Hotel, where Kim had just given interviews in connection with the launch of his endorsement of Omron digital blood pressure monitors. It’s one of the products that Kim has agreed to promote in connection with his health-driven celebrity image.

The way he rattles off the properties of good and bad food sounds exactly like his encyclopedic knowledge of animals and other stuff that he dispenses on his TV shows on ABS-CBN.

But the information he culls about food is of special concern.

“I come from a family of diabetics,” he says, “although I still don’t have it. But I know that at one point, it may come. It’s a matter of delaying it or not. Both my lolo and lola from both sides of the family died of complications from diabetes. So, although I’m not diabetic, far from it, I eat like a diabetic.”

He says he first became conscious of what he eats after suffering a stroke three years ago—in which he temporarily lost his memory and cognition. He also underwent surgery to fix a hole in his heart.

His food regimen, he says, is equivalent to “the third level of the South Beach Diet.” That means he consumes food which has low glycemic index, or which doesn’t raise his blood sugar level.

Everything is complemented by a rigorous exercise program. He’s into triathlon, which involves swimming, biking and running. He competes in various marathon and triathlon events, most recently in the Cobra Ironman in Cebu.

The stroke, he says, was the reason he got into triathlon. “I don’t do it to avoid [having another] stroke, but the stroke was a catalyst for me to get into the triathlon lifestyle.”

He clearly remembers the day the stroke happened. For a moment, he recalls, he thought he ate something poisonous or was drugged.

It was 8 a.m., he had just gotten out of the shower and was about to dress up for work as one of the cohosts of ABS-CBN’s “Showtime.”

As he looked into the mirror, he felt disoriented. “My tendency was to run around,” he recounts. “I was running around my room naked for about five minutes.”

He says he still had the presence of mind to run outside so people can help him. “When I saw my maids,” he relates, “I tried to scream their names, only to realize I couldn’t speak. I knew what to say, pero walang lumalabas. Sabi ko, matindi ‘to, may problema ko. (I tried to speak but nothing came out. This was serious, I thought.)

He then put on his pants and ran out to the street. His driver rushed him to the Philippine General Hospital. His wife Felicia made arrangements for him to be transferred to Makati Medical Center within two hours, allowing doctors, he says, to “disperse” the stroke.

Fortunately, he points out, the stroke hit the left frontal lobe of his brain, which affects only language and memory temporarily.

“After three days, I gained about 70 percent back. I was given an exercise requirement, to do 30 minutes of brisk walking. Within three months I was 100 percent okay. Because I was still young, my blood circulation is still healthy,” he says.

Had the stroke hit the right side of his brain, Kim would have been paralyzed.

He says he got into triathlon while brisk walking around Manila Polo Club where his wife is a member. He saw a group of runners, admiring their graceful movements.

“I wanted to learn how to run like that. At that time hindi ako makalakad nang mabilis due to the medicines I was taking, para akong babagsak. Tsaka utal pa ko (At that time, I still couldn’t walk fast because I was still on medicines. And my speech was still slurred),” he recalls.

He wanted to join the running group led by Ige Lopez, but initially, he says, Ige didn’t want to take him in due to his condition.

“But eventually he said yes. The slow walk became a fast walk, the slow run became a fast run, then I started joining races. About a year after my stroke, I joined my first full marathon, 42 km in Bordeaux, France. I did it again last year. I’ve done a few triathlons here last year,” he says.

He’s training for his first full Ironman in Australia this December.

Doing triathlon, he admits, produces a natural high. “It’s better than any drug. You feel it during the run, and a few hours after the run. You feel good about life. You’re happy. All your serotonin levels are up there. This is what the chemicals in drugs try to induce.”

A typical day for Kim goes like this, which involves frequent eating in small portions:

Upon waking up at 5 a.m., he eats peanut butter sandwich on whole wheat bread and a piece of fruit, and drinks black coffee before running or biking.

“I have to do three sports at least three times a week; swimming, four times a week,” he says. “Peanut butter is not fattening and gives quick energy; I take black coffee for the kick. Then I run, 10 to 15 km in Dasma (Makati City) because my wife’s dad lives there.”

He takes his second breakfast at Starbucks near Santuario de San Antonio in Forbes Park with his running group. “I have corned beef pan de sal and iced tea, again for the kick because I have another workout.”

Then he swims at Manila Polo Club, after which his third breakfast consists of muesli and a cup of latte “for the kick for ‘Showtime.’ I don’t put sugar in my drinks, even my iced tea,” he stresses.

He has five minutes to take a quick lunch during the first commercial break in “Showtime”: “Half a cup of brown rice, a little ulam that they have there, konti lang, pampalasa. Bago matapos ang ‘Showtime,’ on the third gap, that’s around 2 p.m., gutom na ko nun. I eat a piece of fruit.”

Then he goes home to his  condo to sleep. “When I wake up gutom na ko nyan. One peanut butter sandwich again or corn,” he says.

And then off he goes to read the weather forecast on “TV Patrol.”

When he goes home to Malate, he usually has dinner with Felicia: “I have a big bowl of salad, marami, kahit mag one to sawa ka sa salad okay lang, lalo ‘pag green leafy. My wife is able to buy Japanese dressing,  ‘yung shoyu dressing with sesame, ang sarap. She buys it at Robinsons Supermarket.”

For protein, he sometimes eats steak: “The best cut is tenderloin, it has the lowest fat content. Or I also eat fish.”

He says that his blood pressure is 110/70, mainly because of all the training in triathlon: “The more athletic you are, the lower it gets, almost on the verge of low blood, but that’s normal for an athlete.”