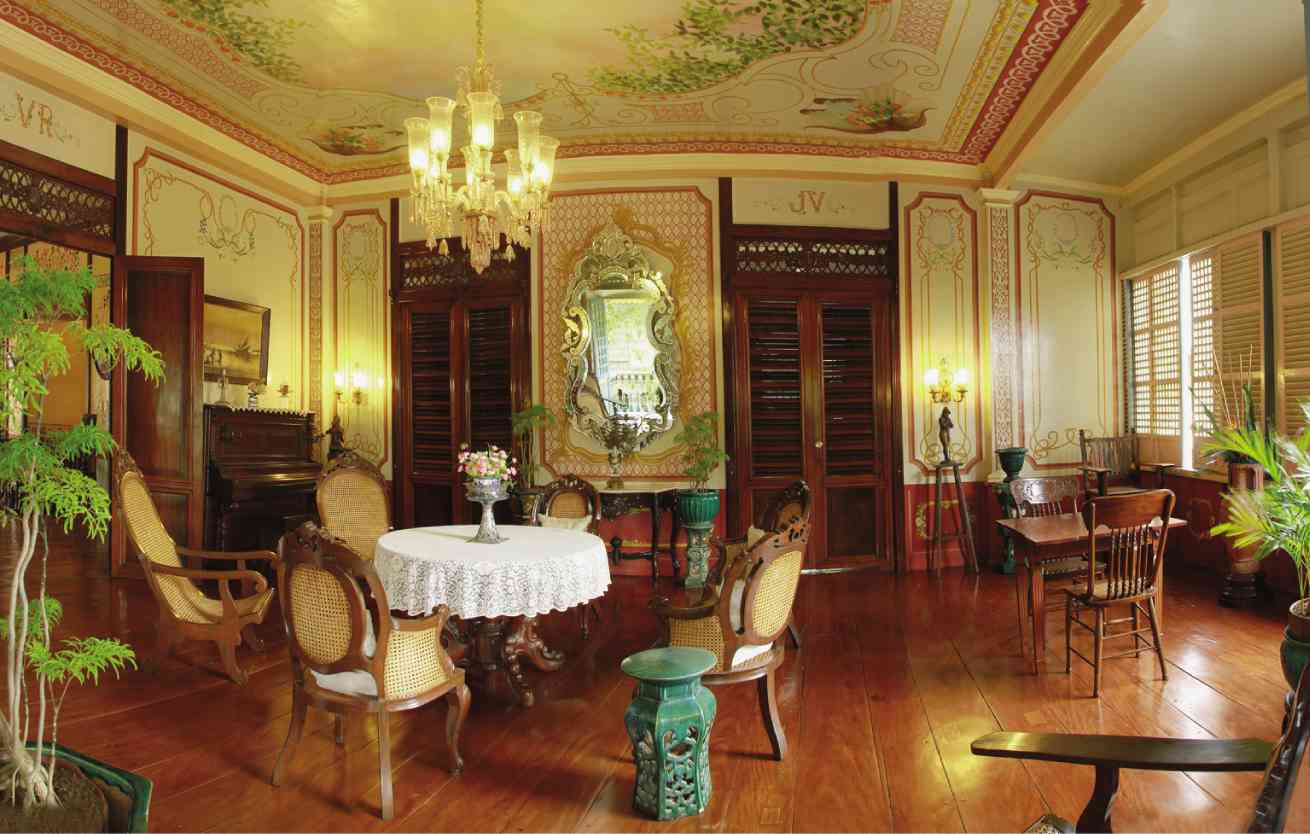 IN THE living room of Wedding Gift House, the curlicues on the wall are inspired by the baptistry in a Pakil Church. It has ‘Louis XV’ furniture, the sillion (armchair with curved back), American chairs and chandelier from India.

In the early 1870s, the wedding of Don Eulalio Villavicencio and his niece Gliceria Marella was likened to the merger of two big corporations. Both hailed from Taal’s wealthiest families, with businesses in shipping and sugar.

In the 19th century, Batangas sugar was considered one of the best in the country. At the end of the milling season, boats came loaded with money in sacks.

People would bring the sacks to the house and lay them out on a mat. It would take them two weeks to count the money and roll them up. Whoever came to the house was asked to help out.

“The rich didn’t have to work,” says Martin Tinio, co-author of the coffee-table book “Philippine Ancestral Houses.” “There were fiestas every month in every town. The well-to-do attended nine-day novenas, went to picnics, danced, rested. That was the life of the haciendero.”

Don Eulalio’s family lived in a house that was built in the 1850s.

For his young bride, he built a house next door which was connected to his parents’ house by a bridgeway. Built in 1872, the new house was called Casa Regalo de Boda or the Wedding Gift House—which has now been restored by Tinio.

The Villavicencios are mentioned in history books for having helped finance the Philippine Revolution. Don Eulalio even went to Hong Kong to give José Rizal P18,000 for his propaganda literature.

He came back with banned publications and was later charged with sedition. He fell ill at Fort Santiago where he was imprisoned.

A famous account says the Spaniards offered to release Don Eulalio in exchange for information about the Katipunan. His wife, Doña Gliceria, it is said, refused, saying that she carried his surname and didn’t want to betray him and his cause.

After two years, Don Eulalio was released. But his condition worsened since he had contracted tuberculosis. He died at home after three months.

His death motivated Doña Gliceria to support the Katipunan. Not only did she give monetary aid, she also used the older

Villavicencio house as meeting place of Andres Bonifacio and Gen. Miguel Malvar. She donated a ship which transported soldiers, armament and food between Batangas and Manila.

During the proclamation of Philippine Independence on June 12, 1898, Gen. Emilio Aguinaldo bestowed on her the title “Matriarch of the Revolutionary Forces.”

The Wedding Gift House, says Tinio, “is the only house I know which is composed of five lots—one garden for one house, and another garden for the other house. These houses were linked by a bridge. The garden had a fountain with giant clamshells.”

Tinio notes that in that era in the Philippines, the Wedding Gift House was the only one with window grills on the second floor that had a bloated silhouette called “rehas na buntis.”  The balconies were also shaped like a squash.

A sign of wealth was the variety of colors and patterns. The facade stood out for its yellow ochre and indigo tones. When one looked at the stenciled patterns dominating the interiors, one could only imagine the enormous amount of paint used. But that didn’t matter to the wealthy owners.

The ground floor, or entresuelo, featured patterned tiles from Spain. When the house was renovated six years ago, the tiles were reproduced by Mariwasa.

The tindalo staircase led to the caida or antesala, the transition space to the living room. It was called caida, which meant “to drop,” because when women climbed the stairs, they had to hold up their skirts and dropped them only upon reaching the caida.

In renovating the house, Tinio derived the curlicues and floral patterns for the stenciled walls from a pattern book published in the 1870s. In some parts of the house, the patterns were inspired by an old church and convent.

The caida now has Art Nouveau furniture with carved faces by sculptor and decorator Emilio Alvero. It is also decked with sillas Americanas, or American chairs.

At the turn of the 20th century, these chairs were assembled in the same way the Ikea chair is put together today. The sillas Americanas were considered the Monobloc chairs of their time, given their ubiquitous presence, says Tinio.

For the comedor, or formal dining room, Tinio had the narra chairs drawn from the turn-of-the-20th-century designs of sculptor Isabelo Tampinco. “The carvings of cashews, bananas and guavas on the crests were appropriate for this room,” he says.

In the old days, mirrors were imported from Vienna, which held the monopoly of the glass industry.

These big homes had a dispensa, or pantry. “If you were rich, you didn’t shop. When the shipment arrived, you would get the first choice before the goods were displayed in the shops. There was a selection of wines, chorizos, turrones, walnuts, jamon. These foods were locked up in the dispensa,” says Tinio.

When the Wedding Gift House was renovated into a bed-and-breakfast place, the dispensa was turned into a bathroom.

The Casa Villavicencio is just as interesting with its own status-symbol possessions. It is furnished with the tumba-tumba, the Philippine rocking chair, which is bigger than its American predecessor.

A capilla, or long bench, is a staple item in the caida. A Waterford chandelier with its lead crystals still dominate the living room.

Cutwork transoms with capiz and gold leaf adorn the bedrooms.

A trapdoor in the comedor once led to the basement where the Katipuneros held their secret meetings.

For their sense of nostalgia, history and interesting vintage interiors, Casa Villavicencio and the Wedding Gift House have become, understandably, top tourist draws in Taal, itself a well-preserved heritage town.