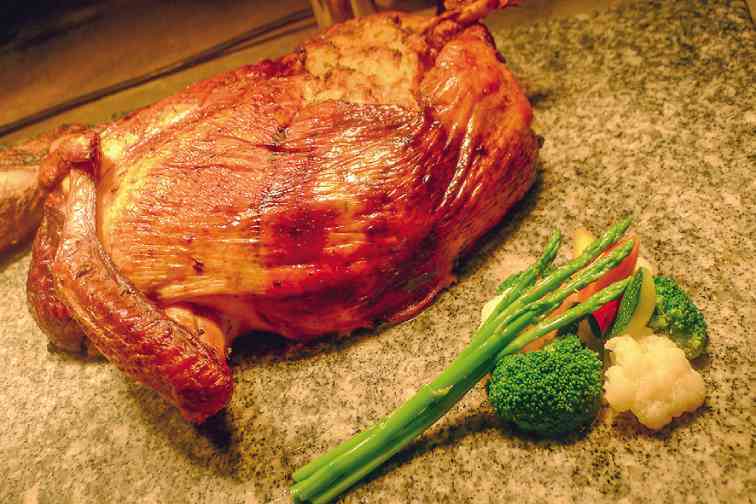 The huge turnout at the opening of Diamond Hotel’s first US Food and Wine festival last week was notable, given how the metro had just weathered a storm that had dumped record amounts of rain in four days. It was also the first time the sun came out, if only for a few short but glorious minutes.

That afternoon, after the ribbon-cutting and traditional picture-taking, guests were treated to the culinary expertise of Hong Kong-based chef Christopher Gallaga, owner of the Fat Angelo’s chain that serves Italian-American fare, family-style.

The chef prepared a menu cycle heavy with meat, including steaks, hams and an actual “turducken.”

The humongous golden-brown dish is the result of stuffing a chicken into a duck that is then stuffed into a butterball turkey.

Gallaga said it takes almost two days of preparation before they can even begin cooking. The turkey is brined overnight (soaked in a brining fluid) to ensure that it does not become dry and tasteless. The skin of both the chicken and the duck is removed because it only becomes soft and squishy.

Isn’t it difficult to peel off the skin of uncooked poultry? How is it done?

All three birds are then deboned and butterflied before they are baked at the same time.

Once finished, the turducken, which now looks like a slightly flattened turkey with a savory stuffing of day-old bread, minced onion and herbs, is allowed to rest so the flavors are enhanced.

“It’s like your adobo,” Gallaga said, referring to the Filipino stew of pork or chicken flavored with vinegar, soy sauce and whole peppercorns. “It actually tastes better after a day or two because the flavors are allowed to meld. It becomes moist and more flavorful.”

He also likened turducken to paté de foie gras (goose liver paté) because one has to wait a few days for the flavors to meld before spreading some on a cracker.

Today is the last day of the food promotion, but Gallaga shared a few tips for those who have plans of heading to the hotel’s Corniche restaurant for lunch or dinner.

“They have to try the Virginia Ham which is salt-cured ham similar to Parma ham. To tone down the saltiness, we wash off the salt and press a thin crust of sugar over it,” he said.

The ham is then sliced very thinly so you get a good proportion of seasoned ham, fat, and a rim of crusty sugar.

It’s obvious the chef is a meat lover because, aside from the turducken and Virginia ham, he suggested that diners try his slow-cooked pot roast, which, like the turducken, took 48 hours to whip up.

His last tip was not to forego dessert, in particular his orange and grapefruit sherbet. After a meat-centric meal, it’s the perfect palate cleanser: clean, cold and tangy.