Granddaddy of Bonifacio plays to be restaged this September | Inquirer Lifestyle 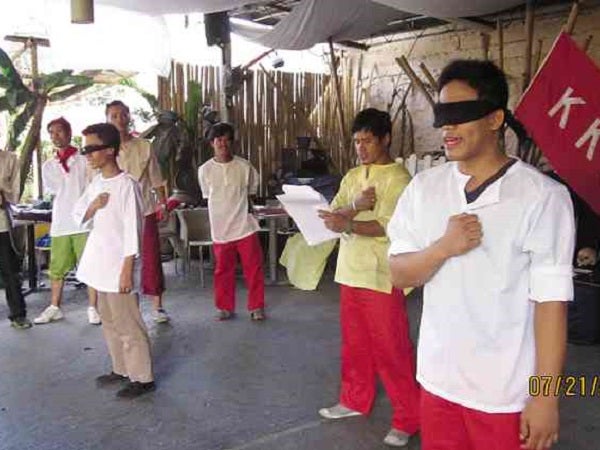 Scene from the play, where neophytes pledge their loyalty to the secret society. PHOTO BY AMADÍS MA. GUERRERO

Granddaddy of Bonifacio plays to be restaged this September

The granddaddy of all plays on Andres Bonifacio, whether musical or straight, is composer Jerry A. Dadap’s “Andres Bonifacio: Ang Dakilang Anak-Pawis,” with Dionisio R. Salazar, a Palanca Award-winning playwright, and leading poet Rogelio G. Mangahas, as librettists.

Bankrolled by the Puyats, the musical play was first presented at the Cultural Center of the Philippines (CCP) in 1979, and the critics immediately acclaimed it as a major work. The late, great baritone Elmo Makil played Bonifacio, with mezzo Jay Valencia-Glorioso as his wife Gregoria de Jesus.

Actor Tommy Abuel was the Narrator, with Tony Espejo directing a cast of 200.

Since then, through the years, “Andres Bonifacio: Ang Dakilang Anak-Pawis” has been staged from time to time, but never with the grand treatment it deserves. This year is Bonifacio’s 150th birth anniversary and the musical play will be restaged—but due to budget constraints, only the first part, corresponding to the first three acts of the five-act play.

Thus, Dadap’s Andres Bonifacio Concert Choir (ABCC) will present this part again (it did so earlier this year at the Philamlife Theater) on Sept. 28 at St. Cecilia’s Hall, St. Scholastica’s College-Manila, to be assisted by the Manila Symphony Orchestra (MSO) under the baton of Arturo Molina. (Tel. 0922-8114475)

Rizal did not appear in the original production, but in this slightly revised version, the composer has him (played by bass Erick Borlaza) singing “La Deportacion,” a lovely and melancholy aria Rizal himself penned. Even Josephine Bracken has a walk-on-role, with Rizal during his exile in Dapitan introducing her (“mi esposa, Josefina”) to the visiting Pio Valenzuela (tenor William Serrano).

The first act shows Bonifacio (tenor Jeffrey Perida) with his siblings, going about preparing walking canes and fans which they sell for a living, singing and dancing. Then comes the news Rizal has been arrested, and every one becomes apprehensive. Bonifacio forms the KKK at the Tondo residence of Deodato Arellano (tenor A. Ma. Guerrero).

Act II focuses on the love life of the Supremo as he courts Oryang (soprano Bettina Dadap) to the disapproval of her father, Nicolas de Jesus (tenor Joey Tuzon). But he is eventually won over, and the couple are married, first in Binondo church and then according to KKK rites.

The love duet here, “Ikaw Lang,” is achingly beautiful, and one wonders why it is not a concert staple.

Bonifacio and his followers flee to Pugadlawin, tear their cedulas and amid cries of “Mabuhay!” prepare for battle against the Spaniards.

It is August, the fatal month.

In 1979, political detainee Mangahas had just been released. He couldn’t find work at first, so being chosen co-librettist was a kind of Godsend. And the musical play “expressed my sentiments for freedom and democracy that our society badly needed during the dictatorship.”

He found Dadap “a highly gifted artist and a staunch nationalist,” while Espejo was “soft-spoken, progressive and talented.”

About the ensemble, Mangahas raved: “Members of the whole cast were gifted and also exuded extraordinary enthusiasm and love of country during the entire rehearsals and actual performance. What a rare opportunity to be working with them!”