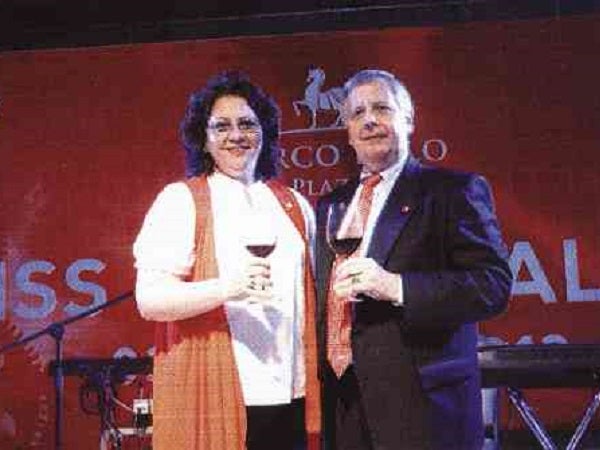 Michel and Amparito Lhuillier gathered an intimate group of friends and relations for dinner at La Maison Rose to celebrate their 49th wedding anniversary. Present were Michel’s sisters Angie L. Mathieu, with son David Paulson, and Marguerite Lhuillier, recently arrived from Las Vegas and planning a trip to Europe.

Mariquita Yeung came with the largest bouquet of pink roses ever. Completing the group were Rosebud Sala, Teresin Mendezona, Carmen Campbell and Honey Loop. As you may well imagine, it was an epicurean occasion of the first water.

Fine Lhuillier Brut champagne was served along with the appetizers—pâté de foie gras, bite-size hamburgers, scallops, and shrimp mousse. The crispy bread and creamery butter were from Paris.

A squash soup with croutons and walnuts was followed by an avocado/shrimp salad. Guests could choose their entrées. The steaks were juicy, the mahinlo fish, too, and the duck comfit was to rave about. Health buffs swore by the tofu dish, rated tops.

Dessert was either Crème Brûlée a la Vanille or Chocolate Coulant. This was the time for everyone to applaud the impeccable service, personified by restaurant manager Honeylet Thevenin and the chef, Adrien Guerrey.

A week later, Michael and Amparito left for a vacation in California and to spend time with daughter Monique and Tom Bugbee and their family. They are expected back in Cebu by the first week of September.

Keep Sept. 23 in mind, Amparito has told friends. That’s the day to open Casa Amparito, a new restaurant at the old location of Pino in the Lahug area. Cuisine will be international, with accent on Filipino and Spanish specialties. Marina Codina is in charge.

The National Day of Switzerland was the highlight of the seventh annual Swiss food festival at the Marco Polo Plaza Hotel. It was a rainy night but that did not dampen the celebration, made even more cozy at the covered court in the hotel’s sprawling complex.

The hotel’s general manager, Hans Hauri, was not around, hospitalized with a minor complaint. Doing the honors were resident manager Julie Najar and Lara Constantino, director for sales and marketing.

Food and beverage director Stephan Wieprich set up quite an impressive array on the buffet. The aroma of melting Raclette pervaded. There was a plethora of sausages, cheeses and legs of ham cured to perfection. And piles of chocolates, most of them concocted by the Marco Polo chefs, along with varied pastries.

On hand from the Swiss embassy was Juerg Casserini, representing the ambassador, and announcing this was his last official duty before his retirement. He had come with his lovely wife, Hilde Casserini, who sat beside Vivina Yrastorza at the presidential table.

Another diplomatic event at the Marco Polo was the reception to celebrate the National Day of Belgium. Hosting were Belgian Ambassador and Mme. Christian Meerschman, and Belgium’s honorary consul in Cebu, Enrique Benedicto, and his charming wife Helena.

The occasion was doubly significant as this year’s National Day of Belgium was marked by the accession of a new monarch, King Philippe II, upon the abdication of his father, King Albert II, who is 80 years old.

Belgium is overjoyed by the fact that Philippe’s wife, Queen Mathilde, is the first Belgian woman to become the country’s queen since the Saxe-Coburg-Gotha dynasty came to rule Belgium in 1831.

Ambassador Francisco Benedicto hosted a delightful Chinese luncheon at Choi City restaurant in the Banilad Town Center. It was in honor of dear friend Elizabeth Chiongbian Johnston who was in town for a series of family celebrations.

Ely has the gift of gab, and this was one more occasion for her to make everyone laugh and share similar experiences. Joining in the fun were her sister Elena Chiongbian Young, Marlinda Tan and Honey Loop.

In August 1982, Tina Ebrada opened Golden Cowrie restaurant serving excellent Filipino food in basket receptacles lined with smoked banana leaves. It had a native setting, with sawali walls, bamboo furnishings and white sand on the floor. In just a few months she had to expand the area and increase the personnel.

Years later, Tina sold the business, and Kenneth and Christine Kokseng took over. They have put up branches all over town, and improvised some new dishes. The time to taste them came at the opening of the latest Golden Cowrie branch in A.S. Fortuna, Mandaue City.

The bash was splendidly coordinated by Jaja Chiongbian Rama and Vanessa Deen Araneta. Tina Ebrada was asked to be the guest of honor which she gladly accepted. Kenneth and Christine were around as were their mom Mildred Kokseng, uncle Earl Kokseng with pretty wife Jojo Quintos Kokseng, plus dear friends Julius and Nelia Neri, Flor Ynclino and Cookie Newman.

This is Cebu table-hopping, said Nelia, Flor, Cookie and Chinggay Utzurrum when they next met shortly after at the Prince Fusion gourmet restaurant of the Golden Prince Hotel and Suites. Perfect hosts were the hotel’s president, Benedict Que, and Aaron Que, management trainee.

The Golden Prince is ideally located at Acacia St. cor. Archbishop Reyes Ave., and quite near Ayala Center. On the menu that memorable evening were Spanakopita Fritters and baked oysters in garlic cheese. The Pochero soup and Pasta Alio Olio were followed by Beef Salpicado, Crispy Pata, Braised fish, Broccoli with crab meat, and Singaporean chicken.

Dessert was the biggest halo-halo we’ve ever seen. Let’s do it again, said Benedict Que, to which everyone said yes. At Golden Prince every Friday is a special buffet at P350 per person, eat all you can. A reservation is imperative.