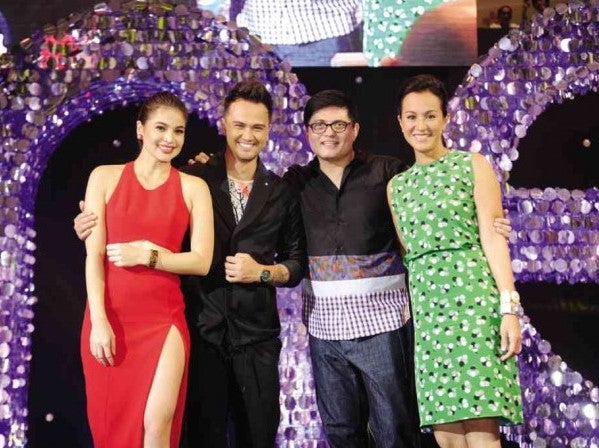 In the blink of an eye, we are now in the “Ber” months! Parties and launches are in full swing this time of the year and Swatch is always the first to come up with exciting affairs.

Swatch Queen Virgie Ramos and creative director Rowell Santiago got the energy flowing at the latest Swatch launch. Glorietta was decked out in red, white and blue dots, and split into distinct event areas—from the stage which had a 3D photowall to the interactive booths, food and drinks corner, the Swatch Shop, and the giant watch at the old Glorietta Activity Center.

Guests had their invite slap bands on their wrists with Swatch watch to match.

Tita Virgie’s stars for the event were all present to give the audience a great time. Matteo Guidicelli and Jasmine Curtis kicked off the event. Ciara Sotto did an awesome MyPole performance.  Everyone agreed with Martin Nievera singing, “It’s all about me… Swatching over you!” I am so looking forward to Martin’s concert on Sept. 13, titled “3D” to signify his three decades in the biz.

I wore my amazing Philipp Tampus gown with my Prince Charming date, Christian Bautista, who will soon play the male lead in the musical “Cinderella.”

Lea Salonga unveiled the Swatch Chandeliers at the Swatch Shop with the help of 7-ft-tall stilt men.

Billy Crawford revved up the party with his performance of “Treasure.” Then magician/ mentalist Erik Mana entertained the crowd with his tricks. It was hilarious to witness the “kalokalikes” of Michael Jackson and Luis Manzano come out from the time-travel stunt. And it was jaw-dropping to see hot Derek Ramsay revealed with the new Swatch Time Machine watch on.

Sam Concepcion and Tippy dos Santos started the throwback experience as they sang “Dati,” the Philpop grand prize-winning song, about failed romance in the time of Nintendos and the Jolina-Marvin love team.

The Swatch circle was not complete without original Swatch lady Mikee Cojuangco-Jaworski. She announced the grandest Swatch throwback of all—due to popular demand, her favorite Pop Swatches are back for a very limited time.

The lively performances continued and the storm that blew “Maring” away that day was Anne Curtis with her very own version of “Only Girl” and “Girl on Fire.” For the finale, she and Martin sang their duet “Without You,” whose video already has over one million views on YouTube.

The event turned out to be another success due to the invaluable Swatch team composed of Belle Tison, James Locsin, Rochelle Pena and Boy Rotea.

During the program, Martin handed me a donation to the Philippine National Red Cross Makati Chapter for victims of Typhoon Maring.

The donation was turned over to the directors of Red Cross Makati. Chair John Tiong, vice chair Marivic Rufino and director Ed Escaño were delighted over the generosity of Swatch. This generosity will also be mentioned in the coming Red Charity Gala that I co-chair with Kaye Tinga on Oct. 19 at the Makati Shangri-La Hotel.

Swatch has been very supportive of the Gala since we started five years ago. Together with Swatch, Bench has also been a constant supporter. It is fitting that our featured designer, Ezra Santos, is also the latest Bench designer scent endorser. We are truly excited to highlight Ezra and his latest 1920s-inspired collection.

Another noteworthy celebration, the 22nd anniversary of Metro Gallery, was marked with a show, “Catch 22,” at the Artist’s Space  in Ayala Museum. It showcased various artworks of talented Filipino artists.

Irene Cometa started Metro Gallery on the advice of the late National Artist José Joya. She had worked in various art galleries in the late ’70s and ’80s, assisting Rita Ledesma of the Art Association of the Philippines and Carol Guerrero of The Rear Room Gallery. Irene became manager of the Garden Gallery in Makati City. She now runs Metro Gallery with her daughter Chitty.