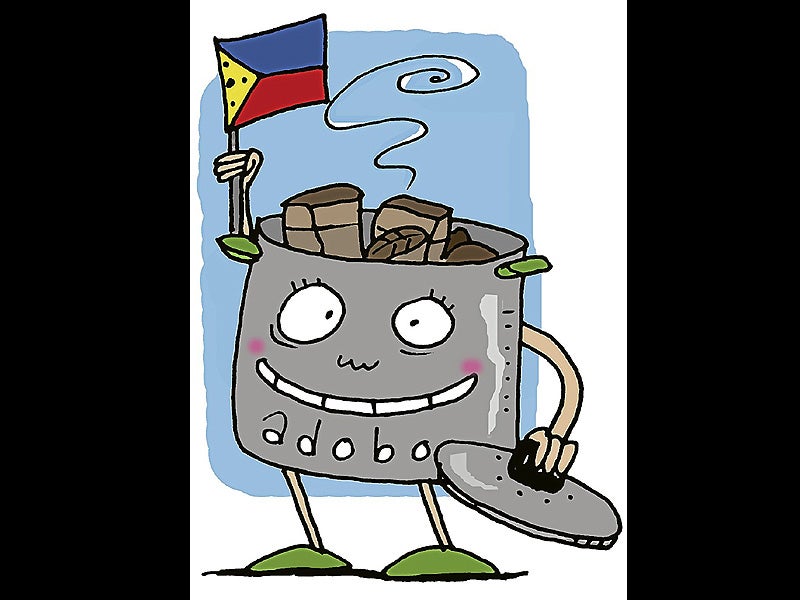 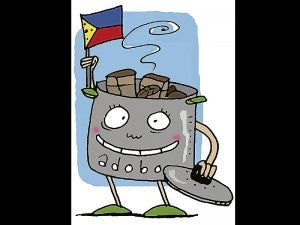 It has been claimed in scholarly papers on food that sinigang is the national dish of the Filipino, like the sampaguita is our national flower and the monkey-eating eagle is our signature bird, and therefore  sinigang is known all over the Philippines.

In an extensive food research trip I made in 1990 (covering the Tagalog provinces as well as the Ilocos), it was interesting to note that sinigang, so much a part of Luzon’s barrio cooking, is virtually unknown, at least in several municipalities of Ilocos Norte. What may pass off as sinigang could be what a restaurant cook learned during a vacation in Manila.

In the roadside eateries, sinigang was an unrecognizable concoction with carrots in a somewhat sour broth. Some had cabbage or potatoes floating in it. Abaws gid, lahing tinola!

Since I have low self-esteem, I ran to a Ph.D., Dr. Fernando “Butch” Zialcita, who had stayed in Ilocos for months on end on study grants. He had the same observation. No sinigang there!

What then is the “national” dish? Adobo? Adobo is known all over the islands, north to south. And if I go by another Ph.D’s (Arsenio Manuel) study on folktales, anything that is widespread and has many, many versions (like the Monkey and the Turtle) must be an old, old thing. Food writer Nancy Reyes Lumen has found so many variations of adobo that she has been able to write a whole book on it.

But, nationalists cry, adobo is not indigenous—it was introduced by the Spaniards! Buti na lang I have enough doctor friends to run to even if they can’t cure a single bukol! Hindi! said Dr. Ambeth Ocampo. The adobo has been with us even before the colonizers came.

Pinoy to the bone

“Adobar” in Spanish means, among other things, to marinate or pickle meat. When the Spanish came and tasted our food, they found meat pickled or stewed in vinegar and used their word for it—adobo. They did not ask or simply didn’t bother to record its indigenous name. (If they did, they would have misspelled it anyway.) And so adobo it is—and Pinoy to the bone!

Well, it must be my bad planet day, because the other thing I want to bitch about is the attempt to infuse the Japanese word umami, (meaning “a fresh delicious taste”) into our culinary stream. As if it were a superior word. As if we didn’t have our very own, very old, word for it—malinamnam! That’s how Tagalog words are lost.

Other Filipino words can describe some tastes more accurately than English words, which need two or three to do the same. Among the following you will find some:

MAPAKLÁ—The taste of duhat and unripe fruit like bananas or guavas that make your mouth pucker. Some say it’s “acrid” which means “a sharp and biting taste”—not what mapakla is! Another offers “tannic,” which is just too esoteric to hunt. 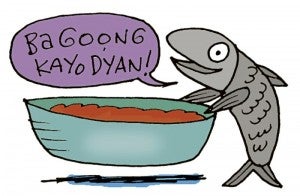 MALINAMNÁM is the taste of fresh, delicious food, (from “namnam”), flavorful, savory.

MANAMISNAMÍS is a mild sweet taste in very fresh seafoods like shrimps, crabs, oysters, clams. Try to find an exact English word for that!

MALABÓ is a texture on the tongue found in apple, mabolo, kamote, potato, chestnuts and certain breads.

MAASKÁD is acidic, like the sourish, bitter taste of the peel of suha, dayap and orange.

I will not include in this list basic tastes like matamis, maalat, mapait, maanghang, etc. which are clear to Tagalog speakers, only the more difficult to describe. Here are some unpleasant tastes:

MAYAPÁ means tasteless and juiceless, as in certain meats or fish.

MAANGGÓ is cheesy or game-y, as in lamb or goat meat. A taste loved by some, detested by others.

KULASÍM is the sweetish-sourish taste of overripe fruits, or milk beginning to curdle. 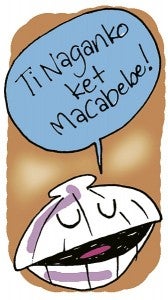 HALPOK or BILASÂ refers to fish that is not fresh and is beginning to rot.

NAKAKAUMAY or NAKAKASUYA is satiation from over-sweet or greasy comestibles. “Too sweet” is also NAKAKATUSING.

PUTAT is to counteract the above feeling by eating fruit or a sweet together with (not after) the meal such as banana, mango, pineapple, pastillas, etc.  “Magputat ka hija, para di ka masuya.”

BURO is preserving food with salt and water to last during the lean months. Familiar buro favorites are green mangoes, paho (aromatic mini-mangoes) and kamias. Burong mangga is called dalok, and its brine serves as a dipping sauce for fish.

By itself, the word buro also connotes fish salted and fermented with the addition of cooked rice or lugaw, which gives the buro its tang and high odor. The unique thing about buro is that the fish is the sauce of the same fish, so that burong dalag and burong hito are the sauce of roasted dalag and roasted hito. Shrimps, too, are fermented and become the lighter balaw-balaw, which is also the dipping sauce of boiled shrimps.

ANGKÁK is the natural food coloring of buro that comes from a tree bark. It imparts a vile reddish-pink hue. Not all provinces use angkak, like Bulacan, that prefers its buro uncolored and lovingly nicknamed “sukang pusa.”

BAGOONG. The Ilocano is a bagoong freak. To him, everything can be made into bagoong, and he loves making bagoong. (The classic proportion is three of fish and one of salt.) Most of the fish bagoong were invented by Ilocanos, but Pangasinan, which has more fish, became its commercial producer.

The most popular seafoods used for bagoong are: 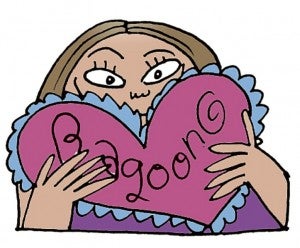 Padas, which are little flat fish used as a sauce for neutral dishes like broiled and boiled fish;

Munamon or dilis (the anchovy bagoong), which is for dishes like the ubiquitous dinengdeng;

Ipon, the delicious fish fry of a mysterious species (some say it’s bangus, others say it’s the delicious ludong or mother carp, still others think it is actually tabios, the smallest fish in the world).

Ipon is so ambrosial that it has been compared to the baby eels or angulas of Spain. When the rainy season starts, the ipon proliferate. Banca after banca is filled with the catch. Ipon has three to five stages of babyhood starting from less than an inch long and transparent, to slightly bigger and light gray, to dark gray to black. Then it swims out to heaven-knows-where and transforms into a fish by another name.

Ipon is mostly eaten fresh (raw), with ginger and vinegar; steamed in banana leaf; sauteed in tomatoes; cooked with broth. Leftover ipon is made into what is considered “the queen of bagoong.” 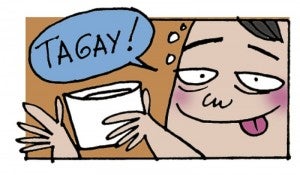 Fish eggs, too, can be made into bagoong. One Ilocano housewife in Greenhills avers that fish liver and intestines, gathered painstakingly every time one cleans fish, and salted in a jar, makes a gem of a bagoong.

In Ilocos, patis is the premier by-product of bagoong. It is the precious liquid that floats on top when the fermented fish has settled properly and been aged for some time. It is very tasty, unlike commercial patis. Genuine Ilocanos don’t buy patis; they skim the top of their bagoong jars.

In rural areas, this patis is skimmed off and set aside for visitors. The remaining bagoong is used for cooking, the sediment squeezed of every possible flavor and the dry fishbones at last given to the cat.

The Ilocano, whether society matron, attorney, antiques dealer or civil servant, could be a closet bagoong maker. One avid and indefatigable bagoong freak kept experimenting with black, gray, pink and reddish-brown bagoong in large burnay jars in his bathroom in New York. His refrigerator and closets were stocked with bottles that he gave away to homesick friends. Filipinos for miles around mourned when he got evicted from his apartment.

KINILAW is better known to Japanese food-eating Pinoys as raw fish sashimi. But to Filipino folk from Aparri to Jolo, it has been there forever. 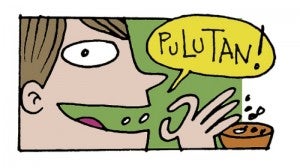 In an archaelogical pit in Butuan, carbon dated to at least 1,000 years, they had excavated, together with the famed balanghai boat (now in the Cultural Center of the Philippines), “edible discards” like the remains of fish bones. These bear slanting blade marks—the same as those still found today on large yellowfin tuna sliced specifically for kinilaw in Butuan (Ed Alegre,  “Inumang Pinoy”).

Kinilaw applies to fish (such as tuna, dalag, pagi, dilis); crustaceans (such as shrimps, crabs and talangka); mollusks (such as oysters, sea urchins and clams); meats (such as deer, carabao, boar); other seafoods (like squid, octopus, seaweeds). All can be eaten raw with a souring agent—commonly vinegar, kalamansi, or dayap and ginger, pepper, garlic, onions, salt.

FIRE WATER: TUBÂ is extracted from coconut or nipa sap, drunk as is, or fermented. The ancient babaylan of Bohol offered tuba and food to appease the angry spirits.

LAMBANOG is brandy produced by boiling tuba over and over and distilled. It has five times the kick of beer, and its devotees claim that it can clear sinusitis and intestinal parasites.

BASÌ. Wine made from sugarcane juice. The brandy distilled from nipa is called laksoy.

TAGAY or shot. Etiquette of drinking prescribes that one tagay be first poured on the ground for the spirits. To begin the round, the master of ceremonies (magtatagay) drinks the first shot. It is the same amount for every glassful.

Only one drinking glass is used by all. The person whose turn it is must empty the glass to the last drop. In Laguna and Quezon, women join these drinking bouts.

PULUTAN. (from “pulut,” to pick). In the provinces, the pulutan or sumsuman that goes with the drinking is not specially prepared. It can be leftover ulam or peanuts and corniks from the corner store, and as wide in range as asusena (dogmeat) to wild mushrooms and locusts.