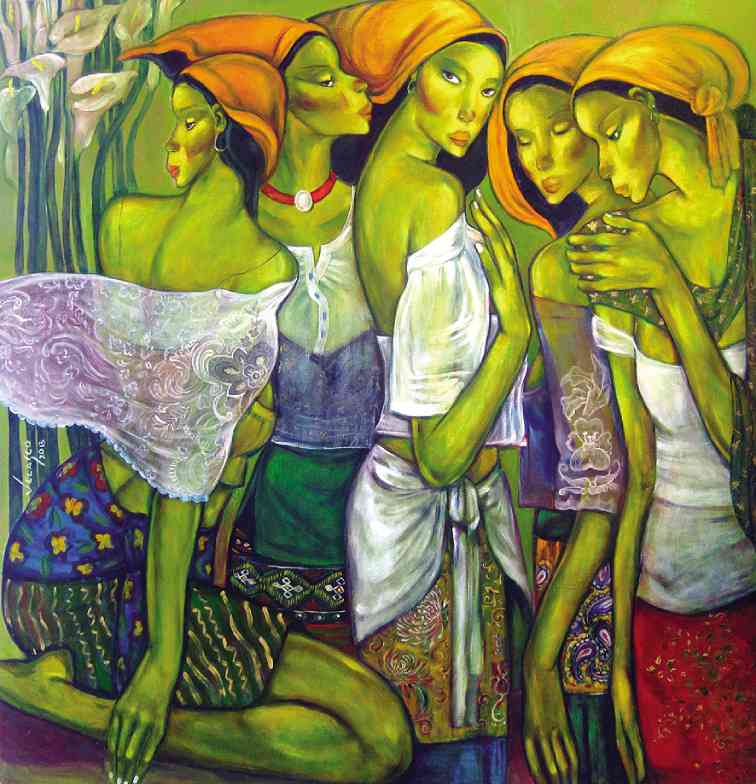 One of Brown’s main characters, the prodigy Dr. Sienna Brooks, volunteers for a humanitarian feeding mission to the Philippines, expecting a country of “geological beauty, dazzling seabed and vibrant plains.”

She is instead shocked to see extreme poverty, unabated crime, chaotic traffic and human trafficking involving even minors.

She notes the hopelessness of its people, leading her to describe her experience: “I’ve run through the Gates of Hell.”

In her forthcoming exhibit of paintings, Lydia Velasco comes up with her own interpretation of Paradise, almost as a contrapunto to Brown’s “Inferno.” Aptly titled “Paradiso,” the exhibit opens Sept. 5, 6 p.m., at Galerie Joaquin.

What Velasco does is to define her own vision of Paradise.  She presents over 20 new works of lush foliage, abundant waterfalls, colorful flowers. It is a world full of chirping birds, bursting with life and overflowing greenery.

Her concept is to present her vision of Paradiso in her gardenscapes and merge these with her strong female figures.

A modernist master, she navigates the levels of Paradiso in her own creative and artistic terms.

Most cultures ascribe Paradise to the afterlife, its various positive definitions helping provide an incentive for good behavior in the present.

The ancient Greeks had their Elysian Fields, a paradisiacal land of plenty where heroic and noble behavior was rewarded for eternity after one’s death.

In ancient Egyptian belief, Paradise was Auru, an ideal hunting and fishing ground where game was abundant and overflowing.

In Judaic and Abrahamic beliefs, Paradise is believed to be the idyllic Garden of Eden, while in Muslim culture it is known as Jannah (garden), a place where man continues to enjoy spiritual and other pleasures not experienced on earth.

Interestingly, Paradise has had cross-cultural references in the history of man. It is often depicted with pastoral or garden-like imagery. It is a place of eternal peace, happiness and harmony.

Paradise has been the subject of artistic and literary interpretations.  The great Dante Aligheri, as you know, made the subject the third part of his “Divine Comedy.”

He described it as a heavenly place of nine celestial spheres with the virtuous and the good enjoying different rankings but all with perpetual joy.

In painting, Jan Breughel is noted for his iconic painting, simply titled “Paradise.”

Other masters such as Jacob de Backer, Peter Paul Reubens, Titian, Jan Breughel the Elder and Lucas Cranach have also painted the subject, their paintings basically interpreting the biblical “Garden of Eden.”

Heironymous Bosch tackled the subject matter magnificently in his triptych “The Garden of Earthly Delights,” done between 1490 and 1510.

Lydia Velasco was born in Navotas on Dec. 27, 1942. She was a Fine Arts major at the University of Santo Tomas and later worked in advertising, becoming one of the first woman art directors in the industry.

She became a member of the Saturday Group, becoming familiar with such art luminaries as National Artists Hernando R. Ocampo and Cesar Legaspi, both of whom she worked with in advertising.

And it was in advertising that Velasco discovered her passion—depicting the female form.

“I was one of those that the bosses would ask to do the story boards for TV commercials of products such as Palmolive and Camay,” she recalls. “Whatever it is, I would make sure their faces contained certain expression—coy, seductive, smiling, or winsomely trying to attract attention.”

It is almost ironic that Velasco is very committed to presenting her vision of Paradise, considering her personal struggles.

The eldest of nine siblings, she became the breadwinner of the family. She recently lost her husband to cancer.

It is precisely because of such a background that art critic Cid Reyes describes Velasco’s women as strong, resilient yet still overflowing with femininity.