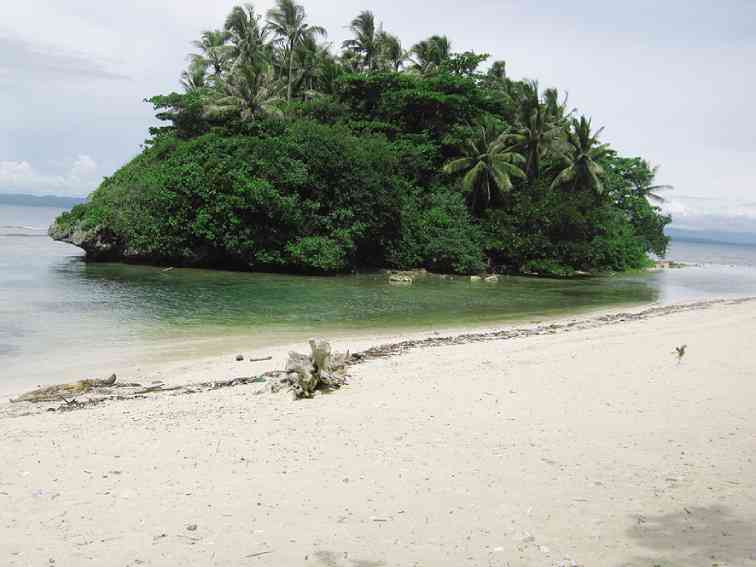 Islands are unique because of their biodiversity and their people’s ethnicity, culture and history. But without proper care, it may be difficult to help these communities retain their heritage and identity amid a sea of change.

Celebrating Taoid (“heritage,” in Ilocano), the National Commission for Culture and the Arts (NCCA) paid a visit to Capul Island and Laoang in Northern Samar to hold “heritage clinics” and help preserve local heritage.

“Taoid” is the theme of the year-long celebration of National Heritage Month, marked in May.

The long celebration is the brainchild of the NCCA’s Subcommission on Cultural Heritage (SCH), to develop heritage awareness nationwide.

During heritage clinics, the SCH committees—the National Committees on Archives, Art Galleries, Historical Research, Libraries and Information Services, Monuments and Sites, and Museums—offer their specializations to promote heritage awareness and conservation in the provinces and regions.

Saint Michael the Archangel Parish was established in the 18th century by Franciscan friars.

According to an article by Msgr. Gaspar Balerite, parish priest of Laoang, the church started as a mission station during the 1650s. Upon the expulsion of the Jesuits in 1767, the Franciscans took over, establishing St. Michael the Archangel Church in 1768.

The Muralla and the Almuraya Fortress Ruins, which defended the rear and flanks of the church from Moro invasions, were later built in 1814.

The church has survived fires and earthquakes, and to this day there has been a constant restoration effort led by Monsignor Balerite.

Beside the church are the municipal hall and the Laoang police station. Between the two modern structures lies the Pergola, a cobblestone arch built in 1894 as part of the old Casa Tribunal (Justice Hall). Two Spanish-era cannons sit beside the arch.

Another notable spot on the island is the Grand Canyon, known as Inogkahan to the locals. It was carved out of  Tumagingting Hill in 1913.

Another unnamed location was also discovered right outside the town. A cobblestone arch, dated 188_ (the last number is illegible and covered with moss), was inspected and assessed by SCH members.

Apart from Laoang, another place visited by SCH officials was Capul Island, where the launch of Taoid was held a day before the town’s Saluka festival.

Capul is a small town with a unique culture, mainly due to its unique language, Inabaknon or Abaknon. A close talk with Capuleños reveals that some words from Waray, Tagalog and Ilocano are used in their language.

Capul also has a rich history because of its strategic location in the inner mouth of San Bernardino Strait, which was important in the Manila-Acapulco Galleon Trade during the Spanish era. The original name of the isle was Abak, hence the name of the language.

According to local folklore, however, the island derived its name from the name Acapulco, albeit shortened. The island served as refuge for ships awaiting favorable winds and currents.

The layout of the town center follows the Spanish townbuilding design, with the large plaza  at the center, the town hall and a church around it.

In 1616, St. Ignatius of Loyola Church was built out of light materials, but  it was razed down twice by Moro pirates.

In 1781, Franciscan Fr. Mariano Valero made a permanent structure, with a stone wall and watchtowers to protect the townspeople and keep a lookout for impending threats.

Yet another testament to the heritage of Capul is the Capul Lighthouse, built in 1896 by the Spaniards. The US Army Corps of Engineers completed the construction.

The six SCH committees held parallel sessions near Capul’s Acapulco Beach, which was used for disembarkation by the Spaniards.

Key areas of concern for the workshops included contextualizing documentary and oral history; library-building; and preservation of heritage sites.

Augusto de Viana, chairman of the Department of History of the University of Santo Tomas and a member of the NCCA Committee on Historical Research, said the story of Capul should start with oral history.

“The authority on the history of Capul would be the people, so there must be awareness [with regard to] writing down the history, either by gathering from local documentary sources, or, if there is a lack of such, oral history,” De Viana said. “You must have the people realize the importance of their place.”

Libraries and other information services also must be developed since “the very least of the concerns of municipalities is the library,” said NCCA National Committee on Libraries and Information Services member Federico Billones. “It would show people’s consciousness of recorded documents.”

But there are also areas of development, such as the “declaration [of heritage sites]; capacity-building for the local people so they can build libraries, museums, and begin writing their own history; and maybe, once we have that, the NCCA can provide grants and funding,” Montalvan said.

After the parallel sessions, the participants and speakers headed to the town to celebrate the Taoid launch at the St. Ignatius of Loyola Parish grounds, within the walls.

Songs in Abaknon were also performed. One told of the lamentation of a woman deserted by her lover during the war. There were also songs about the fisherfolk and mountain springs of Capul Island.