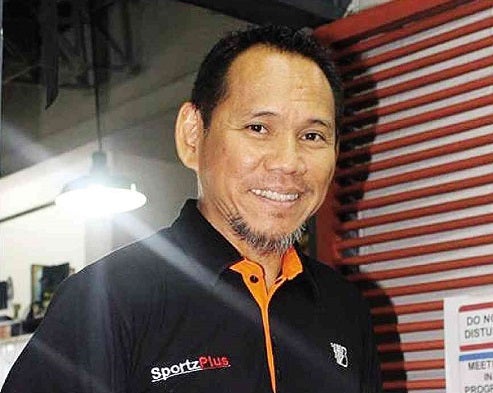 After a 30-year journey, traversing rugged mountains and concrete jungles around the world, Cesar Guarin, the Filipino who aims to be the first Asian to run around the world, is almost halfway through his dream.

It’s a daunting goal, to say the least, especially when most people find it a Herculean task to finish a full marathon of 42.195 km.

But Guarin, known as the “father of ultramarathons” in the Philippines, is taking things one day at a time.

During his Trans Pilipinas Run in 1983 (Zamboanga to Baguio), the epic run that started it all, he ran an average of 65 km a day. His Trans USA (New York City to Los Angeles) two years later saw him do 56 km a day.

Today, with 30 years of long-distance running behind him, Guarin’s goal has shifted.

“I used to want to run the longest, to run the fastest, to run the strongest. Now I find it more fulfilling when I connect with people, with other Filipinos and runners around the world. Sometimes I have to shorten my run so I could meet them and listen to their stories. In bigger cities I would normally spend another day with them for fellowship in their community,” he said.

“Global Run: Alay sa Pilipino” is a tribute to OFWs and a running campaign for tourism in the Philippines, and Guarin hopes to reach his goal by 2018, by which time he would have finished an equivalent of 995 full marathons.

To set a record for a global run, he must cover 42,000 km—a figure that is roughly the size of the earth’s circumference, give or take a couple of thousand kilometers.

Last year he completed his European leg, kicking off from Finland, crossing toward Sweden, Denmark, Norway and the United Kingdom. Guarin covered more than 4,000 km, finishing just five days before the opening of the London 2012 Summer Olympics.

“I watched the Olympics from the outside, and got the feel of being in the Olympic games,” he said, laughing. Guarin, in his youth, once held on to an ambition of becoming the first Filipino to bring home an Olympic marathon gold, a dream dashed by a devastating injury.

Since then, he has met hundreds of Filipinos abroad, such as a Filipino woman who used to peddle basahan on the streets of Manila at age 8, but now drives a BMW in Finland, or the young Oxford University scholar pursuing his Ph.D., or the “Miracle Man” who survived a series of diseases and life-threatening operations, or the GRO who found love and family in the most unlikely place. Such stories inspire Guarin to continue in his mission.

“I was fortunate to get the support of the Department of Foreign Affairs. We haven’t prepared in advance. We were constantly waiting for sponsors to come in,” he said.

But despite the somewhat stressful circumstances, Guarin said his Middle East leg has so far been the most interesting and satisfying run.

The excited community of OFWs, inspired by Global Run’s message, staged fun runs in the last few kilometers of his route. Guarin was no longer running on his own; he had an entire community of Filipino runners tailing him.

“They are most appreciative of what I’m doing. My support team and I bonded with  the OFWs, we stayed mostly with host Filipino families, and listened to their success, or sometimes sad, stories. I want to give them a message of gratitude, for being a big help to the country. They are our modern heroes. My determination to complete the Global Run comes from their heroism. Para sa Pilipino tatakbuhin ko ang Global Run na ito,” Guarin said.

Filipinos would cheer him on at the start of his run, or stop on the road to give him a thumbs-up, or welcome him at the finish line.

The fun runs usually come at the end of his route, he said, with about 100 Filipino and non-Filipino participants running with him for distances ranging from five to 24 km.

The experience is so exhilarating, Guarin said, that Global Run’s Stage 8, the North America Run, from October to December this year, will also have similar organized fun runs.

The North America Run will be Guarin’s first winter run, with chances of snowfall. He has never run through snow before, and while the prospect excites the little boy in him, he is also worried that only a handful of Filipinos might show up or run with him.

Beginning mid-October in Anchorage, Alaska, Guarin will cover 2,470 km, crossing over to Alberta and British Columbia in Canada before going down toward Washington, Oregon and California in the US.

He will end his run Dec. 23 in Santa Monica beach, where he also concluded his Trans USA Run from NYC to LA 28 years ago.

“This is going to be a special run for me,” he said.

Global Run: Alay sa Pilipino has a Facebook page, where fans can follow its progress. Guarin writes: “I run to explore and to see the world beyond my own. I run to commune with God. I run to feel more alive. But most of all, I run to hear inspiring stories from individuals across the globe… From them I begin to see myself—a dreamer, in pursuit of dreams despite their being elusive. Just like them, I know an ordinary dreamer like me can make extraordinary dreams come true.”